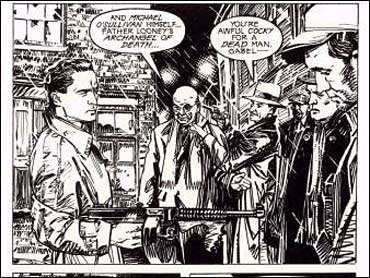 For a time, the business of comic books seemed limited to tales of costumed superheros, gumshoe detectives or thwarted alien invasions, the clientele an assortment of adolescents, collectors and geeks.

But the industry stereotype is undergoing a transformation of sorts thanks to a longer, more literary comic offshoot called the graphic novel.

Bolstered by comic writers and artists bent on telling more complex tales and by a string of Hollywood movies adapted from graphic novels - including the new "Road to Perdition" - publishers, booksellers and readers are beginning to take note.

"This is an art form that is every bit as valid for telling stories and entertaining people as movies or any other form," Max Allan Collins, author of "Road to Perdition," said in an interview from his home in this Mississippi River town.

"The thing about it is that everybody understands the vocabulary of comics. ... The hope is that people who see and like the movie will be interested enough to begin to cross that perceived forbidden land into the world of comics and graphic novels," said Collins, who for 15 years wrote the Dick Tracy comic strip.

Cosmetically, the graphic novel resembles any other book on the shelf, covered with hardback or glossy trade paper, printed with standard paper and plastic-wrap free.

Between the covers is another matter, though.

In the 300-page "Road to Perdition," the black-and-white panels drawn by London-based cartoonist Richard Piers Rayner make visual the images and action of traditional literature.

The panels - which vary from one to four per page - give form and feature to characters, set scenes of homes, diners and downtowns in sharp detail and provide a sense of action and drama. Text balloons advance the plot and story line.

Publishers and comic connoisseurs use the term "illustrative literature" to describe the books, which they say emerged from reader demand for more sophisticated comic-driven storytelling.

Calvin Reid, news editor for Publisher's Weekly, said it is simplistic to view the graphic novel as merely a glorified comic book.

"There is a whole new market that has grown up with comics in the last 20 years that is looking for more," Reid said. "And publishers have been adapting to a bigger share of their audience wanting longer, more sophisticated stories ... without having to go into the comic store once a week."

The 1987 publication of "Maus," the Pulitzer Prize-winning book by Art Spiegelman about the holocaust, is credited by many for setting the graphic novel apart from traditional comic books. In the 1990s, publishers of all sizes - from giants like DC Comics to independents - devoted more resources to developing the graphic-novel market.

Hollywood has adapted movies from many graphic novels, including last year's "Ghost World" and "From Hell," the Jack the Ripper thriller, starring Johnny Depp. Dozens of other books have been optioned by various studios.

Sales are up over previous years, although it's unclear whether readers are new or comic veterans, or whether the increase is being driven by a handful of hot titles.

As of last week, 1.5 million books have sold so far this year, according to Neilsen BookScan, a company that tracks book sales. It is an increase of 700,000 over last year. A run of 25,000 to 50,000 copies per book is considered successful by current industry standards.

"I think they are really starting to catch on," said Carl Lennertz of the American Booksellers Association. "There are still a lot of issues to overcome, like distribution, prices, and the cost and time it takes to publish. But I see these slowly breaking into the mainstream."

For Collins, 50, mainstream acceptance may be too long a wait. "Road to Perdition," first published in 1998 as the first of a trilogy, took more than four years to write, he said. He plans to write his next book as traditional fiction.

"There is a part of me that wants to move faster with the next ones," said Collins. "There is also a need to reach out to a wider audience."