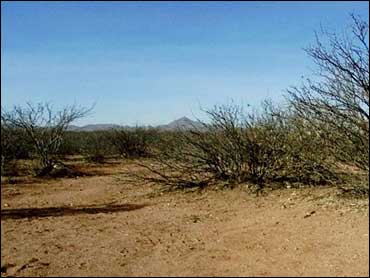 A 9-year-old boy looking for help after his mother crashed their van in the southern Arizona desert was rescued by a man entering the U.S. illegally, who stayed with him until help arrived the next day, an official said.

The 45-year-old woman, who eventually died while awaiting help, had been driving on a U.S. Forest Service road in a remote area just north of the Mexican border when she lost control of her van on a curve on Thanksgiving, Santa Cruz County Sheriff Tony Estrada said.

The van vaulted into a canyon and landed 300 feet from the road, he said. The woman, from Rimrock, north of Phoenix, survived the impact but was pinned inside, Estrada said.

Her son, unhurt but disoriented, crawled out to get help and was found about two hours later by Jesus Manuel Cordova, 26, of Magdalena de Kino in the northern Mexican state of Sonora. Unable to pull the mother out, he comforted the boy while they waited for help.

"He stayed with him, told him that everything was going to be all right," Estrada said.

As temperatures dropped, he gave him a jacket, built a bonfire and stayed with him until about 8 a.m. Friday, when hunters passed by and called authorities, Estrada said. The boy was flown to University Medical Center in Tucson as a precaution but appeared unhurt.

"We suspect that they communicated somehow, but we don't know if he knows Spanish or if the gentleman knew English," Estrada said of the boy.

"For a 9-year-old it has to be completely traumatic, being out there alone with his mother dead," Estrada said. "Fortunately for the kid, (Cordova) was there. That was his angel."

Cordova was taken into custody by Border Patrol agents, who were the first to respond to the call for help. He had been trying to walk into the U.S. when he came across the boy.

The boy and his mother were in the area camping, Estrada said. The woman's husband, the boy's father, had died only two months ago. The names of the woman and her son were not being released until relatives were notified.

Cordova likely saved the boy, Estrada said, and his actions should remind people not to quickly characterize illegal immigrants as criminals.

"They do get demonized for a lot of reasons, and they do a lot of good. Obviously this is one example of what an individual can do," he said.