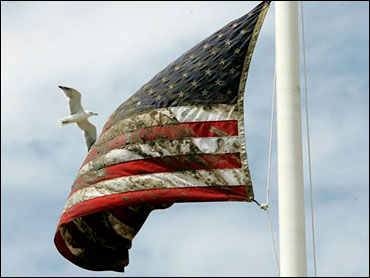 Hurricane Ike's death toll in the U.S. is up to 50 as authorities on the Texas coast provided more details on fatalities from the storm.

Galveston County Medical Examiner Stephen Pustilnik said Wednesday that crews have found the first five victims on Galveston Island and another in Brazoria County. Authorities have said they expected to find bodies in Galveston.

Two of the victims in Galveston were people who needed dialysis treatment but did not leave the island. Another was a woman with cancer whose breathing machine lost power in the storm.

Pustilnik said search teams found another victim drowned in a truck and a fifth was found in a hotel.

Most people in the fourth-largest U.S. city of Houston remained without power, making it tough to track the latest information on where to pick up supplies. For most, the electricity wasn't expected back on for at least another week.

In Scott Terrace, a neighborhood of one-story wood frame houses, Myrle Smith, 59, said many of her neighbors were old or sick and didn't have cars to get to an emergency food distribution site less than one and a half miles away. Trees, massive limbs and garbage littered the area, which had no power.

Things were far worse on the island of Galveston and other Gulfside communities that were torn apart by Hurricane Ike. Those who stayed through the storm's arrival last weekend have few neighbors, almost no services and little sense of when that might change.

Despite primitive conditions, thousands sought to get back to Galveston on Tuesday after officials opened a brief "look and leave" window so people could check on their homes and businesses. The resulting traffic jam backed up for miles and led officials to call off the temporary return just a few hours later.

And there are still about 250 survivors on the nearby Bolivar Peninsula. But they don't want to leave, even though officials insist they must go so the cleanup can safely begin.

"It is pretty rough conditions over there," said County Judge Jim Yarbrough, the top elected official in Galveston County. "We have access issues for delivery of emergency services. Our goal is to vacate the peninsula."

While the storm's survivors struggle, a political fight may be in the making as Texas Gulf Coast lawmakers seek federal money for Hurricane Ike recovery.

The money could end up in a larger economic stimulus package that House Democrats are considering bringing to the floor despite resistance from the White House.

The package could be as big as $50 billion.

Texas Republican Sen. John Cornyn said he'd welcome disaster assistance for the hurricane recovery and other disasters such as wildfires. But he warned against using the bill as "sort of a Christmas tree for a bunch of bloated spending that's not necessary to restore people to their homes and repair the damaged infrastructure."

Meanwhile, tens of thousands across the Midwest snapped up batteries, generators and coolers as they waited Wednesday for crews to restore power amid the soggy mess left behind by Hurricane Ike.

Flood warnings remained in effect Wednesday across the region.

As much as 10 inches of rain fell in Indiana, Illinois and Missouri after Ike hit the Gulf Coast. Hurricane-force wind blew in Ohio and Kentucky and a tornado in Arkansas damaged several buildings.

Ohio's utilities reported at least 900,000 people still without power Wednesday. Some were expected to be in the dark until the weekend. Long lines at supermarkets, hardware stores and gas stations had receded, but stores were running short on emergency supplies.

Home Depot stores were short on generators, tarps, gas cans and other emergency supplies because some stock had been sent south to help with hurricane relief in Texas and Louisiana, said Jen King, a spokeswoman for Home Depot Inc.

Elsewhere, truckloads of batteries, ice and coolers were selling as soon as they hit the shelves. Grocers and residents alike tried to preserve perishable food.

Lines of people waited for bagged ice at a supermarket in Mason, Ohio, and Cincinnati-based Home City Ice Co. was operating 24 hours a day to help meet the heavy demand.

Ohio Gov. Ted Strickland toured wind-damaged sections of Cincinnati, Dayton and Columbus on Tuesday, a day after declaring a state of emergency.

The governors of Illinois, Indiana, Kentucky and Pennsylvania have also declared states of emergency. The storms brought Ike's death toll to at least 49 in 11 states from the Gulf Coast to the upper Ohio Valley, with new reports continuing to surface.

A 20-month-old boy apparently drowned in a stormwater-filled ditch near Auburn, Mich., about 100 miles north of Detroit. Firefighters tried to resuscitate the boy but he was pronounced dead at a hospital.

In Indiana, there were more than 70,000 customers without service Wednesday morning.

Across Kentucky, power outages still affected nearly 300,000 customers, the state said, down from as many as 600,000 customers at the peak - the state's biggest power outage on record. Louisville Gas & Electric predicted full power restoration in 10 to 14 days, with about 160,000 customers doing without power there early Wednesday.

Downed lines also knocked out power in western Pennsylvania, where about 64,000 customers remained in the dark early Wednesday. Utilities said they hoped to restore service to a majority of customers by Friday. Butler County, north of Pittsburgh, was under a state of emergency.

With flood crests expected to be below earlier projections, several Missouri communities were breathing easier. Still, problems persisted on Wednesday.

The National Weather Service lowered predicted crests at St. Louis and other communities by 2 to 6 feet. Significant flooding was happening nevertheless along parts of the Missouri, Mississippi and other rivers.

The Meramec River, for instance, has risen above flood stage three times since March. Forecasters now believe it will crest at 36 feet in Arnold, Mo., on Thursday - 6 feet below earlier projections but still 12 feet above flood stage.

Dozens of state highways remained closed in Missouri on Wednesday. Power outages that peaked at more than 80,000 after the storms were down to about 1,000 homes by Wednesday, most in the Charleston area of southeast Missouri.

In Illinois, water had largely receded in and around Chicago by Wednesday. In the hard-hit Chicago neighborhood of Albany Park, power was restored to all 340 homes flooded over the weekend after Ike overwhelmed drainage and sewer systems.

In suburban Des Plaines, Ill., where more than 1,000 people were displaced by flooding, the Des Plaines River was expected to fall below flood stage Wednesday, the National Weather Service said.

"The recovery process is under way," said Will Soderberg, a city spokesman. "And that should take the rest of the week."