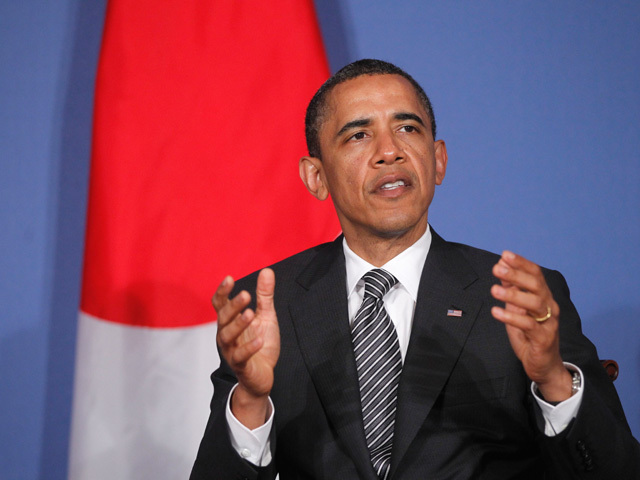 WARSAW, Poland - Forget what you learned in civics class back in high school. It turns out a bill doesn't have to be signed by the president to become law. A machine can sign it for him.

Pres. Obama was 3,700 miles from the White House at the G8 Summit in Deauville, France, when Congress voted final passage of a bill to extend the life of three expiring provisions of the Patriot Act, provisions deemed important by the president.

There was no way to get the bill signed by Mr. Obama in France before the Thursday midnight deadline, so aides say he authorized his staff secretary to use the "autopen" to sign the bill for him.

"Failure to sign this legislation poses a significant risk to U.S. national security," said Deputy Press Secretary Josh Earnest. "Congress approved the extension, and the president directed the use of the autopen to sign it."

The "autopen" is a device used by the White House for decades to sign the million Christmas cards a president sends out each year. It's used by political committees to appeal on the president's name for contributions.

But this is the first time that we know of an "autopen" was used to sign legislation into law. And it raises the question: is it legal?

See what Article 1, Section 7 of the U.S. Constitution says:

"Every Bill which shall have passed the House of Representatives and the Senate, shall, before it become a Law, be presented to the President of the United States; If he approves he shall sign it..."

It says "he shall sign it." It doesn't say he can have an aide use a mechanical device to affix a facsimile of his signature to the legislation.

Questioned about the constitutionality of using an autopen to sign a bill for the president, the White House pointed to a 2005 opinion from the Justice Department's Office of Legal Counsel. At the end of a 29-page review that includes obscure legal references and frequent citations of common lawn, the OLC came to this opinion:

"...we conclude that the President need not personally perform the physical act of affixing his signature to a bill he approves and decides to sign in order for the bill to become law. Rather, the President may sign a bill within the meaning of Article I, Section 7 by directing a subordinate to affix the President's signature to such a bill, for example by autopen."

And that's what President Obama did.

Spokesman Nick Shapiro says Mr. Obama was awakened at 5:45 a.m. in Deauville, France, by the staff secretary on the trip, to review and approve the Patriot Act bill. With 15 minutes before the deadline, "he then directed that the autopen be used so it could be signed into law."

We're told the aide sent word back to the White House to put President Obama's John Hancock on the bill robotically with the autopen.

A White House staffer says it was first time the autopen has been used by President Obama to sign a bill into law.

Former White House Chief of Staff Andy Card tells CBS News that President George W. Bush never used the autopen to sign a bill, even though the legal opinion validating such a practice was produced during his administration.

The Supreme Court has never ruled on the constitutionality of using an "autopen" to sign a bill into law.

And if the president can authorize a machine be used to enact legislation, could he ask one of his daughters to sign his name to a new law?

When one member of Congress first heard that an autopen had been used to enact legislation, he first thought it was a joke.

Congressman Tom Graves, R-Ga., worries what might happen if the president is hospitalized or otherwise in a state of diminished capacity.

"...Can a group of aggressive Cabinet members interpret a wink or a squeeze of the hand as approval of an autopen signing?" says Graves. "I am very concerned about what this means for future presidential orders, whether they be signing bills into law, military orders, or executive orders."

Graves is requesting that President Obama provide a detailed explanation of his authority to delegate this responsibility to a surrogate, "whether it is human, machine, or otherwise."

Interestingly, when the White House put out official word that the president had signed the Patriot Act measure at 11:54 p.m. Thursday night, 6 minutes before the deadline, the announcement did not mention that an autopen had been used.

The White House is defending the use of the autopen, but it will release a photo of the signing machine or even disclose the name of the manufacturer or model number of the device.