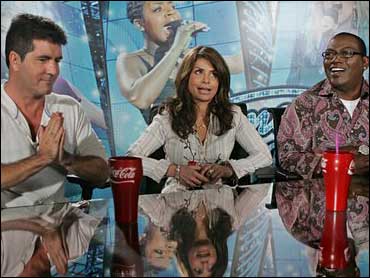 This column was written by Devin McKinney.

Some cultural manifestations are like glossy paper: You pick them up, examine them, and put them down again. They're smooth, self-contained, and leave no residue on those who touch them. An academic essay on Abu Ghraib, for instance, or an opinion column. Others are like flypaper: You can't touch them without getting stuck to something – in the case of "American Idol," to symbols of Americanness. The show is controlled by and comprised of flesh-and-blood mortals who don't seek to be symbols or to act them out. And yet the show represents, emblematizes, signifies like crazy. It's democracy itself.

"Idol" commenced its fifth season on January 17, and it's clear by now that there are several non-symbolic reasons for its success. It has hit on a long-term combination of quality (in the rough sense of consistently giving people something they want) and controversy. It's already racked up an impressive number of minor scandals. Its three judges – "nice" Randy Jackson and Paula Abdul, "mean" Simon Cowell – lend it the character continuity and occasional conflict of a sitcom. Its format appeals to the most sedentary squares as well as the most irritating post-ironic hipsters – and even to the occasional critic, who may combine aspects of both.

I've reflexively loathed the "Idol" phenomenon these past few years, despite feeling obliged to check it out now and again. But my mistake was always to wait until the last few weeks of each season, when the competition had tightened to a narrow field of potential winners so wretched – soulless, funkless, every squawk, grunt, strut, and flutter, a cliché screwed down and clamped tight – that I assumed the earlier stages of competition could only be more of the same. But the real action is in the opening rounds, when the judges traverse the country for mass auditions that bring out the weird and the wild, the obsessed and the oblivious. These segments, currently airing, are painfully funny, sometimes only painful, and often revelatory of some aspect of democracy, spectacle, and human interaction in a contrived commercial setting.

Most of the auditioners are just bad – butt-shaking slobs and reedy-voiced nebbishes hoping for, not even 15 minutes of fame, but five seconds of camera time. Some are ferociously bad, like the woman who sang "Fame" as if through a mouthful of black bile. Some are transfixingly bad, like the man whose daring avant-garde rendition of "She's Out of My Life" consisted of syllables stretched coast-to-coast and off-key notes held for eternities. (This may be an outsider-music legend in the making.)

Then there was the warm, modest, full-figured woman who came on as a singer but claimed to have discovered in herself, quite recently, a gift for poetry. Halfway through her vocal offering – the standard gut-heaving ballad – she cut the song and went into a dramatic reading, in hip-hop cadence, of her poem about The Ghetto. It was a catalog of clichés (needles in arms, babies having babies, dreams deferred) that were clichés circa 1970, when Richard Pryor parodied the shortcomings of Afro-revolutionary verse by portraying a street poet who hoarsely screams, "BLACK!!! [pause] Thank you."

So the poetess finished and took a breath. Randy and Paula were speechless, fumbling for a sensitive response to this caged bird's abominable song. But Simon looked like he was shopping for neckties. "Do you have anything a bit more cheerful?" he asked.

I loved him for that. Sensitivity is one thing, but crap is crap.

This story was not finished. We'd been informed that the contestant sacrificed her job as a sales rep to pursue her dreams of idolhood. Simon was so insistent on the wrongheadedness of the move that he offered to phone the woman's ex-boss and get her job back. We watched, and he did. The contestant was excited. The ex-boss was excited. Simon was – well, contented.

It was a vaguely mawkish display, and moving nonetheless. A woman had given up a paycheck to be a poet. She was told she'd never be a poet. She got her paycheck back. And against all odds, she was still happy. It said something about celebrity and obscurity, dreams public and private, disappointment and joy, and life going on. It was the feel-good moment of the week.

The "Idol" auditions boomerang between moments like that and others that confirm prejudices and superiorities, that play to narrow minds and coarse humors. At the Denver auditions, one Zachary Travis – a teenage boy of androgynous frame and manner – made a painful go at Whitney Houston's "Queen of the Night." Randy asked if Travis was a girl, which was stupid; Simon said the performance was "atrocious" and "confused," which was true.

But afterward, as Travis sobbed with his family, the theme from The Crying Game was heard. That was cheap. The Gay and Lesbian Alliance Against Defamation certainly thought so: "The real offense here," read the ensuing statement by GLAAD Entertainment Media Director Damon Romine, "was in the producer's decision to add insult to injury by turning a contestant's gender expression into the butt of a joke." P.C. obfuscation aside – this kid is clearly trying to find his "gender expression" – that's right on.

The moment dramatized, yet again, something key about the American mainstream: Our freaks get their moment in the sun, but it will only be a moment, and as we watch, we'll retain our option to ridicule. Meanwhile Simon, Paula, and Randy – the forward lookouts who represent what they want to believe we believe we want – will systematically banish the quirky, stupefying, marginally talented freaks to clear a path for the inevitable winner: the vanilla soul sister in hip-huggers, the milk-fed heartland honey, the plucky survivor with Aretha-size lungs.

That's where the mainstream roars back, big and stupid, to shut down its freaks. "Idol" inevitably gets worse the "better" the contestants become. As the range of offerings narrows from the weird and the wild to the merely marketable, it's like going from an urban street fair to a suburban mall. And given the sleaze factor at work, it's irritating that the show's most common response to its weirdos is to widen the eyeballs, look askance and say, "Ooooo-kee." This is more than hypocritical, insofar as "Idol" does all it can to attract strange birds, and thrives on the gawk appeal they provide. Man does not live by bread alone, nor the mainstream by the insipid likes of Clay Aiken.

"Idol" appears on Fox, and Fox is itself a repository of democratic contradictions. The network has offered some of television's best shows ("The Simpsons," "The X-Files," "Arrested Development") along with some of its worst. (Hell holds an eternity of flesh-cutting and bone-breaking for Nely Galán, creator of that sick surgical spectacle "The Swan.") Fox's entertainment arm truly is what its cable news channel claims to be: fair and balanced. That is, despite being flagship to the media empire of Rupert Murdoch, a well-known conservative, it gives air to exactly those voices its owner would deem most objectionable: gay voices, ethnic voices, liberal, peace-mongering, anti-Bush voices.

For subversive content, no mainstream outlet comes close to Fox. The once-mighty Big Three networks are neutered and timid in comparison. This is really something, when you think about it: Imagine a network run by liberals that gave such extensive prime-time exposure to the satiric mouthings-off of conservative cartoonists, sitcom writers, and auteurs of the hour drama. (Okay, there probably aren't any of those, but I did say "imagine.")

You'll retort that it's all about money and ratings. That Fox isn't truly interested in robust debate – it's interested in profiting from the very dissent and kinked-out entertainment its owner's ideology opposes. No argument here. But that's the point. That's the occasional cracked magic of the marketplace, wherein robust debate occurs as the natural result of the profit motive. Capitalism, by servicing desires that are often in direct contradiction of our official ideologies, can expose those ideologies as inadequate, oppressive, merely a ruling-class version of the truth. Our national self-righteousness is complicated by the bizarre evidence of our viewing patterns. The almighty dollar trumps the Almighty. Amen.

Fox understands this, and unlike its milquetoast competitors it has the guts to exploit it. It understands that, no matter how virtuous America pretends to be, sex and satire ultimately outlast puling sincerity; that even staunch Bush-backers believe the U.S. government lies, and despite their politics will desire TV that dramatizes that fact; and that even conservative red-state retirees want to watch sexually ambiguous white boys imitate black divas in the three-week televised freak show that is the "American Idol" auditions.

What does that mean, at or near the bottom line? Does it mean, for instance, that Samuel Alito won't be confirmed to the Supreme Court, or that, despite his slimy evasions, Roe v. Wade and other civil liberties won't be embattled in the coming years? Does it mean that the homophobic Americans who enjoy watching de facto drag queens on "American Idol" will suddenly grow outraged at the harassment of gay youths in their own communities, or the right's shameless demonization of same-sex marriage?

No. It couldn't mean that; that would require a magic pill for all the diseases of democracy, the malignancies of human nature. It means only that, as long as contradictions remain tangible and visible in the open spaces of the culture, debate will continue. That's utterly essential: the moment debate dies, democracy dies. And "American Idol" – bless its maddening, inspiriting, contradictory heart – is one thing keeping this democracy alive right now.

Devin McKinney is the author of Magic Circles: The Beatles in Dream and History (Harvard). His essay on mystery novelist Harry Stephen Keeler recently appeared in The Village Voice.
By Devin McKinney
Reprinted with permission from The American Prospect, 5 Broad Street, Boston, MA 02109. All rights reserved