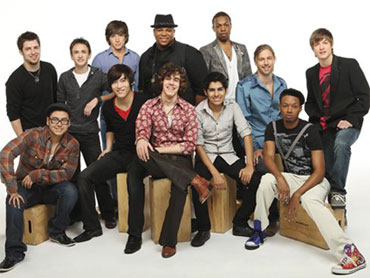 It was a man's world on "American Idol."

In a last-minute switch, the 10 male semifinalists performed Tuesday instead of the 10 female semifinalists because 24-year-old dreadlocked singer Crystal Bowersox from Toledo, Ohio, was hospitalized and unable to take the stage. Bowersox, who also plays the guitar and harmonica, is expected to perform with the other women on Wednesday's show.

The semifinalists' performance order wasn't the only "Idol" adjustment. The judges slipped into a new seating and critiquing order. Ellen DeGeneres moved down between Randy Jackson and Kara DioGuardi while Simon Cowell went back to getting the last word after last week's wonky rotating evaluation system, which only seemed to befuddle the panel.

"After last week, I was just coming up here to perform," said Urban.

The judges were less jazzed with Jermaine Sellers of Joliet, Ill. The 27-year-old gospel singer, who copped to still wearing one-piece pajamas, shot back at the judges. The panel unanimously agreed they didn't appreciate what was going on with his rendition of Marvin Gaye's "What's Going On," so Sellers asked them what they'd like him to perform next week.

"I'm not sure you're going to be here next week," retorted Cowell.

Lee Dewyze, the 23-year-old paint sales clerk from Mount Prospect, Ill., and Andrew Garcia, the 24-year-old musician from Moreno Valley, Calif., ditched their guitars to mixed results. Dewyze admitted he was nervous singing Hinder's "Lips of an Angel" with just a microphone stand. Garcia faltered crooning James Morrison's "You Give Me Something" from a stool.

"I like when you surprise us, and we need another big surprise from you right now," DioGuardi demanded of Garcia.

The 10 female semifinalists are scheduled to perform Wednesday. The two male and two female semifinalists with the fewest viewer votes are slated to be sent home Thursday, leaving 16 contestants in the competition. Thursday's episode will also feature bespectacled eighth season finalist Danny Gokey performing his single, "My Best Days Are Ahead of Me."