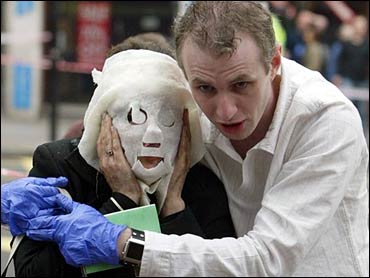 Burned, bloodied and bandaged, the picture of Davinia Turrell running barefoot through the streets became an iconic image of London's deadly bomb blasts.

The 24-year-old Turrell was in stable condition at Chelsea and Westminster Hospital on Monday, recovering from wounds suffered last week.

"She is doing really well, every day there is an improvement," Louise Wells, 29, said of her younger sister. "She has started to laugh and joke again."

Turrell, a barrister, suffered burns to the left side of her face. A graduate of Bournemouth University, she had been working as a corporate tax trainee.

When the bomb blasts struck London on Thursday, she was on her way to work and had been planning a half day so she could pick up a new car in the afternoon.

Louise Wells praised Paul Dadge, a 28-year-old former firefighter who spotted her sister on a street corner by the Edgeware Road subway station, site of one of the four bombings.

As CBS News Correspondent Allen Pizzey reports, Turrell, whose mother died of cancer a month ago, may have been saved from permanent disfigurement by the quick action of Dadge, who knew she needed a burn mask to soothe the burns.

Wells said her sister can't remember all the details of the blast.

"She remembers a blast and a ball of fire, but that is all she remembers," she said. "One of the things we are trying not to do is to make her upset, we are not asking her what she remembers, we ask her how she feels in herself, and she is very positive."

Her father said he was grateful his daughter survived.

"I lost my wife last month and now this has happened to my daughter," David Turrell told the Daily Mail.