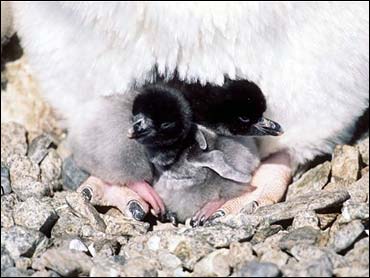 A remnant of the largest iceberg ever recorded is blocking Antarctica's McMurdo Sound, threatening tens of thousands of penguin chicks with starvation and cutting off a supply route for three science stations, a New Zealand official said Tuesday.

He called it "the largest floating thing on the planet right now" and said U.S. researchers estimate it contains enough water to supply Egypt's Nile River complex for 80 years.

It is so big it has blocked wind and water currents that break up ice floes in McMurdo Sound during the Antarctic summer, which begins later this month. The U.S. McMurdo Station and New Zealand's Scott Base are located on the sound. Italy's Terra Nova base is nearby.

The iceberg is in the path of four ships due to arrive in Antarctica in a month with fuel and food for the three stations. Scientists are looking into solutions, including breaking an 80-mile path through the ice.

While the situation is a growing concern, the bases are not immediately in danger of running out of supplies, Sanson said.

The same cannot be said for the newborn Adele penguins.

Tens of thousands of the chicks could starve in coming weeks because the ice build-up in the sound has cut off their parents' access to waters where they catch their fish, Sanson said.

Currently there is "more fast (blocked) ice in McMurdo Sound than we've ever recorded in living history for this time of year," Sanson said.

The penguins are important to scientists as markers of environmental chance, such as global warming. The iceberg is threatening two of four colonies in the area that scientists have been studying for 25 years.

One is on Cape Royds, where 3,000 breeding pairs of Adele penguins now face a 112-mile round trip to bring food to chicks at their nesting grounds. The parents cannot survive such a long journey without eating much of the food they have gathered for their young, Sanson said.

Penguins carry the food for their young in a pouch in their necks and will eat it themselves if they are hungry enough.

"Penguin researchers are predicting that the annual hatching is pretty certain to fail," Sanson said, meaning most chicks will die.

Likewise, scientists fear that only about 10 percent of the 50,000 breeding pairs of Adele penguins at nearby Cape Bird will rear a chick this season, Sanson said. Adult penguins there face a 60-mile round trip across the ice to reach open water and food.

New Zealand research scientist Peter Wilson said the ice blockage "is a very serious event for these colonies." Penguins breed for the first time at three years of age.

Wilson expected the Cape Royds chicks would hatch but die of starvation and the bulk of the Cape Bird chicks could die.

Wilson, New Zealand's project leader for the study of the four Adele penguin colonies in the region, said he was sure all the colonies would survive — though their numbers could decline by up to 70 percent.

Antarctica New Zealand is working with the United States and Italian Antarctic programs on alternatives for receiving vital fuel supplies for their science bases in late January.

A U.S. icebreaker, fuel tanker and cargo ship plus an Italian cargo vessel are due to deliver a year's supply of fuel and food at that time, he said.

The alternatives are to break an 80-mile channel through the pack ice to reach Winter Quarters Bay on the McMurdo Sound coast — or offload the fuel and other supplies on the ice edge, pumping fuel through temporary lines several miles to storage tanks, he said.

All Antarctic bases have contingency supplies of a year's food and fuel, Sanson said.

The iceberg is located between McMurdo Sound and Franklin Island to the south and is moving north toward the sound at about 1.2 miles a day. The concern is it will stick on the Ross Ice Shelf, which forms part of the sound and stay there, causing still more problems.

The iceberg is a remnant of one that broke off the Ross Shelf in 2000. That one measured about 4,400 square miles, the size of the Caribbean island of Jamaica, and was the largest iceberg ever recorded.