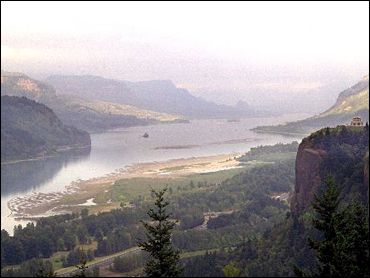 Now picture that dam giving way, the water thundering out in 48 hours, through four states, across Washington and into the Pacific.

These cataclysmic events, called the Missoula Floods, took place at the end of the last Ice Age, 14,000 years ago. The biggest scientifically documented floods ever, they left canyons, valleys, lakes and ridges that still dominate the terrain today, some so dramatic they can be seen from outer space.

Yet no marked trail commemorates the floods' path or explains their significance to the public. A growing number of amateur and professional geologists fascinated by the floods think that's a shame, and a study by the National Park Service has proposed a remedy.

The Park Service study, issued in 2001, suggests an Ice Age Floods National Geographic Trail that would follow the 600-mile path of the flood, mostly along existing highways, with signs highlighting important features.

The interpretive flood pathway would cross four states as part of the national park system, recognizing the floods and the 16,000 square miles they covered as a nationally significant resource.

Some markers already exist along the floods' trail, but they were placed by a variety of organizations and are hit and miss, according to Jim O'Connor, a geologist with the U.S. Geological Survey.

The Park Service study envisions a comprehensive route, with towns near key flood features as "gateway communities." Hiking and horse trails, canoeing and kayaking routes would help visitors realize the scope of what happened. The study also recommends that no private land be taken for the project.

The Ice Age Flood Institute, a private nonprofit group that educates the public about the floods, would also like to see visitors' centers on the trail.

But while funding for the Park Service study came from Congress, Congress has not followed up.

"No bill has been introduced yet," said Dale Middleton of Seattle, president of the flood institute, which met Oct. 11 to discuss the project. "We are trying to get someone in the Northwest congressional delegation to do so."

The gorge, 80 miles long and up to 4,000 feet deep, couldn't contain the water, which scoured the rock walls clean and spilled over, probably widening the gorge.

Geologists compare the gorge to a nozzle that sent the floods pouring out in a wall of water perhaps 500 feet high at 80 mph, putting Oregon's Willamette Valley under 400 feet of water as far south as the Eugene area and present-day Portland.

"Most of Portland is a big sand and debris bar deposited where the flood slowed down as it spread out over the Portland Basin," said O'Connor, who is with the USGS Portland office and has researched the floods extensively.

Willamette Valley's fertile soil — which attracted settlers from the Oregon Trail — comes from deposits of flood silt that reach 100 feet deep in places.

"The Oregon Trail might have gone somewhere else if the floods hadn't filled the valley full of sand and silt," he said.

Residents of Portland's comfortable Alameda Ridge and posh Lake Oswego still curse as they tussle with boulders on their property, unaware that they may have ridden the floods for 500 miles encased in icebergs.

The Willamette Meteorite, at nearly 16 tons the largest ever found in the United States and the sixth-largest in the world, apparently also rode the flow. It was identified near West Linn south of Portland in 1902 and is on display at the American Museum of Natural History in New York City.

Flood deposits 50 feet thick in the Beaverton area west of Portland are considered a factor in the area's vulnerability to earthquakes.

In what is now eastern Washington, water flooded today's Spokane Valley to a depth of about 500 feet. The floods ripped away bedrock and formed deep canyons, or "coulees," which remain. Erosion and washed-out channels are visible from space. Some scientists say they curiously resemble those on Mars.

O'Connor said it is not clear whether the floods hit inhabited regions.

Scientists also believe that the Missoula Floods occurred repeatedly over the course of about 2,500 years, as new glacial ice dams plugged the river outlet, Glacial Lake Missoula refilled with water, and the dam then ruptured once again.

University of Montana geology professor David Alt, author of "Glacial Lake Missoula and its Humongous Floods," says the lake broke through ice dams and refilled at least 36 times, probably averaging once every 50 years.

U.S. Geological Survey experts have estimated the flow near the dam breach at 10 times more than the combined flow of all the rivers in the world.

But scientists have often disagreed over the floods' size, scope and frequency. Some have been pilloried for what they thought, none more than J Harlen Bretz, a geologist who worked at the University of Chicago and did extensive field work on the floods.

In 1923 he came up with the theory of a catastrophic flood that deluged the landscape over a matter of days. According to Alt, Bretz's theory contradicted prevailing scientific thinking that geologic events took place gradually, not all at once.

Bretz's colleagues denounced him, but eventually they realized that his research was right. By the time Bretz died in 1981, well into his 90s, he'd been vindicated.