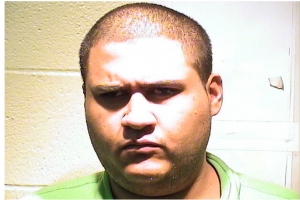 (CBS/WBBM) MOUNT PROSPECT, Ill. - A 20-year-old man broke into a suburban Chicago restaurant early Saturday morning, poured himself a soda, popped some chicken tenders in the microwave, and then stood stunned when the alarm went off.

Police say when they arrived at Mr. Beef & Pizza in Mount Prospect, they found the suspect, Hachem Gomez, in his boxer shorts, and he told them why he did it.

Prospect Police Operations Cmdr. John Wagner said officers found damage to the drive-thru window of the fast-food restaurant and saw the suspect inside. Gomez, then went to front entrance, and unlocked the doors for the officers, according to CBS station WBBM.

When the officers asked him if he worked there, he replied, "No, I was hungry," Wagner said.

Gomez told them he woke up hungry about 3 a.m., went to the Mr. Beef & Pizza, knocked on the door but no one answered - so he broke in and made himself something to eat.

The restaurant's closed-circuit security video showed Gomez stripped down to his boxer shorts, breaking into the drive-thru window, WBBM reported.

Gomez apparently broke a metal grate protecting the window with his body weight, then crawled in through the broken window, police said.

Gomez was charged with burglary. "He did say he was sorry," Wagner said.

The manager of Mr. Beef & Pizza called the crime "stupid."

Bail was set at $5,000 for Gomez, whose next scheduled court date is Sept. 21, according to the Cook County Sheriff's office.