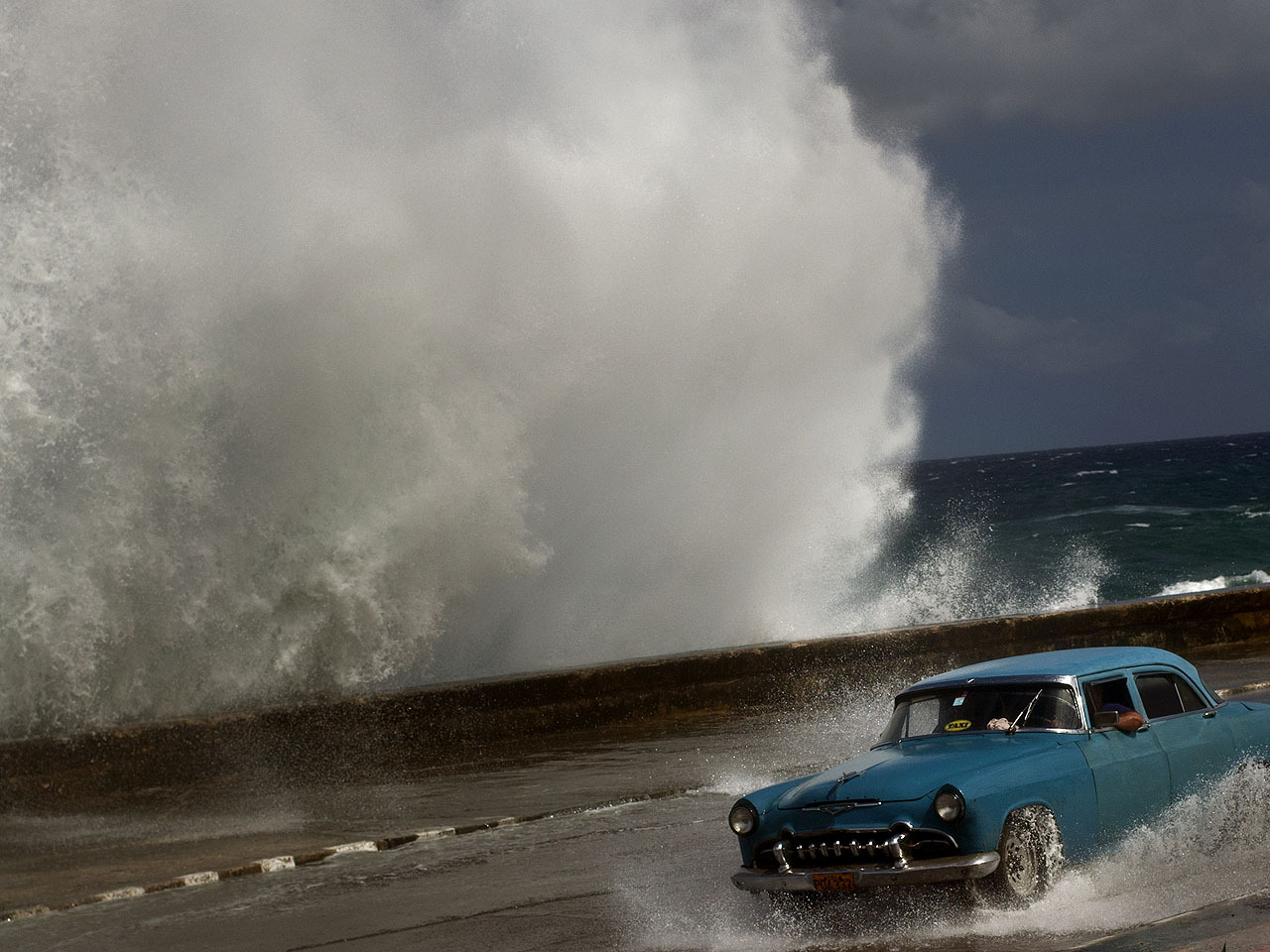 NASSAU, Bahamas Hurricane Sandy lashed the central Bahamas on Thursday night with violent winds and torrential rains, after raging through the Caribbean where it caused at least 21 deaths and forced postponement of a hearing at the Guantanamo naval base on Cuba.

State media in Cuba said Sandy toppled houses, ripped off roofs and killed 11 people in the eastern provinces of Santiago and Guantanamo as it roared over the island as a Category 2 storm early Thursday. Nine deaths were reported in Haiti and one in Jamaica.

Meanwhile, forecasters warned that Sandy will likely blend with a winter storm to cause a super storm in the eastern U.S. next week whose effects will be felt along the entire Atlantic Coast from Florida to Maine and inland to Ohio.

Some weakening in Sandy was forecast during the next 48 hours, but it was expected to remain a hurricane for a couple of days.

By Thursday evening, the hurricane's center was about 105 miles east of the Bahamas capital of Nassau as it spun between Cat Island and Eleuthera in the central Bahamas. The storm had maximum sustained winds of 100 mph , down slightly from earlier in the day, and was moving north-northwest at 17 mph.

Caroline Turnquest, head of the Red Cross in the Bahamas archipelago off Florida's east coast, said 20 shelters were opened on the main island of New Providence.

"Generally people are realizing it is serious," she said.

Power was out on Acklins Island and most roads there were flooded, government administrator Berkeley Williams said. He said his biggest concern was that a boat filled with basic supplies for the island had to cancel its trip until next week.

He said his biggest concern is that a boat filled with basic supplies for the island canceled its trip until next week.

"Supplies were low before, so you can imagine what we are going through now," Williams said.

On Ragged Island in the southern Bahamas, the lone school was flooded, "we have holes in roofs, lost shingles and power lines are down," said Charlene Bain, local Red Cross president. "But nobody lost a life, that's the important thing."

Steven Russell, an emergency management official in Nassau, said that docks on the western side of Great Inagua island had been destroyed and that the roof of a government building was partially ripped off.

"As the storm passes over Eleuthera and Cat Island, they should get a pretty good beating," he said. "There are sections of Eleuthera we are concerned about."

The huge Atlantis resort went into lockdown after dozens of tourists left Paradise Island before the airport closed, said George Markantonis, president of Kerzner International, which manages the resort. He said the resort was now less than half full, but all its restaurants, casinos and other facilities were still operating.

Sooner Halvorson, a 36-year-old hotel owner from Colorado who recently moved to the Bahamas, said she and her husband, Matt, expected to ride out the storm with their two young children, three cats, two dogs and a goat at their Cat Island resort.

"We brought all of our animals inside," she said, though she added that a horse stayed outside. "She's a 40-year-old horse from the island. She's been through tons of hurricanes."

Hurricane Sandy was expected to churn through the central and northwest Bahamas late Thursday and early Friday. It also might bring tropical storm conditions along the southeastern Florida coast, the Upper Keys and Florida Bay by Friday morning.

With storm conditions projected to hit New Jersey with tropical storm-force winds Tuesday, there is a 90 percent chance that most of the U.S. East Coast will get steady gale-force winds, flooding, heavy rain and maybe snow starting Sunday and stretching past Wednesday, U.S. forecaster Jim Cisco said.

"We're talking about a confluence of events," David Bernard, chief meteorologist for CBS News' Miami station CBS 4 said. "We have a powerful hurricane ... in the Bahamas. That's a lot of warm air, a lot of heat, a lot of energy and of course we're deep into fall now and we have an unusually strong jet stream dip with winter-like cold air, and you put those two things together, that's the possibility that is on the weather maps right now and that could lead to a powerhouse low pressure forming Sunday and Monday.

"So you would have storm-force winds, coastal flooding, very heavy inland snows could be possible through parts of Appalachians into western Pennsylvania and with that heavy snow and strong winds at the coast we could be looking at significant power outages as well. So it's kind of the worst of everything coming together, winter and what the tropical season has to offer. There is still the possibility this low stays out to sea, but right now we're thinking there's a pretty good chance there could be some impact."

The worst-case scenario would be if the storm sits off the coast and then backs from the ocean into land. He said, "We saw a similar thing with a perfect storm in 1991 how it moved from east to west into portions of New England, we could see something similar with this."

In Cuba, authorities said the dead included a 4-month-old boy who was crushed when his home collapsed and an 84-year-old man in Santiago province.

Santiago, Cuba's second largest city near the eastern tip of the island, was spared the worst of the storm, which also slammed the provinces of Granma, Holguin and Las Tunas.

There were no reports of injuries at the U.S. naval base at Guantanamo Bay in Cuba, but there were downed trees and power lines, said Kelly Wirfel, a base spokeswoman. Officials canceled a military tribunal session scheduled for Thursday for the prisoner charged in the 2000 attack on the Navy destroyer USS Cole.

In Haiti, Joseph Edgard Celestin, a spokesman for the civil protection office, said the country's death toll stood at nine, including three people who died while trying to cross storm-swollen rivers in southwestern Haiti. He did not provide specifics of how other people died.

Officials reported flooding across Haiti, where many of the 370,000 people still displaced by the devastating 2010 earthquake scrambled for shelter. More than 1,000 people were evacuated from 11 quake settlements, according to the International Organization for Migration.

Sandy was blamed for the death of an elderly man in Jamaica who was killed when a boulder crashed into his clapboard house, police said.

Far out in the Atlantic, post-tropical cyclone Tony kept weakening and posed no threat to land. The storm had maximum sustained winds of about 40 mph and was moving east-northeast at 22 mph. It was about 615 miles southwest of the Azores.