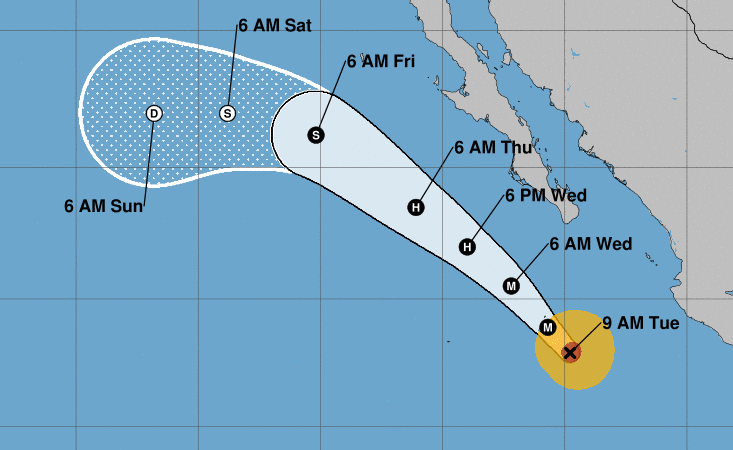 MEXICO CITY — Hurricane John absorbed Tropical Storm Ileana off Mexico's Pacific Coast on Tuesday, and a new subtropical storm, Debby, formed in the northern Atlantic, though none were projected to make landfall.

The U.S. National Hurricane Center said Tropical Storm Ileana was vanishing into the larger system of Hurricane John, which already had maximum sustained winds of 105 mph and was forecast to grow into a major hurricane Tuesday night or Wednesday while south of the Baja California Peninsula. It was likely to bring rain to the southern peninsula, as well as heavy surf.

It was centered about 345 miles south of the southern tip of the Baja on Tuesday morning and was moving to the northwest at 9 mph, a track that would keep it out to sea. It is expected to begin weakening Wednesday night and into early Friday, the center said.

Farther west was recently formed Tropical Storm Kristy, which had sustained winds of 50 mph and could become a hurricane. It was centered about 1,255 miles west-southwest of the southern tip of the Baja. It was moving west at 9 mph.

Meanwhile, Subtropical Storm Debby formed far out over the north Atlantic, but it was expected to be a short-lived storm. Its maximum sustained winds were near 40 mph, and the National Hurricane Center said Debby was expected to dissipate in a few days without threatening land.

The storm was centered about 1,160 miles west of the Azores and was moving north near 16 mph.