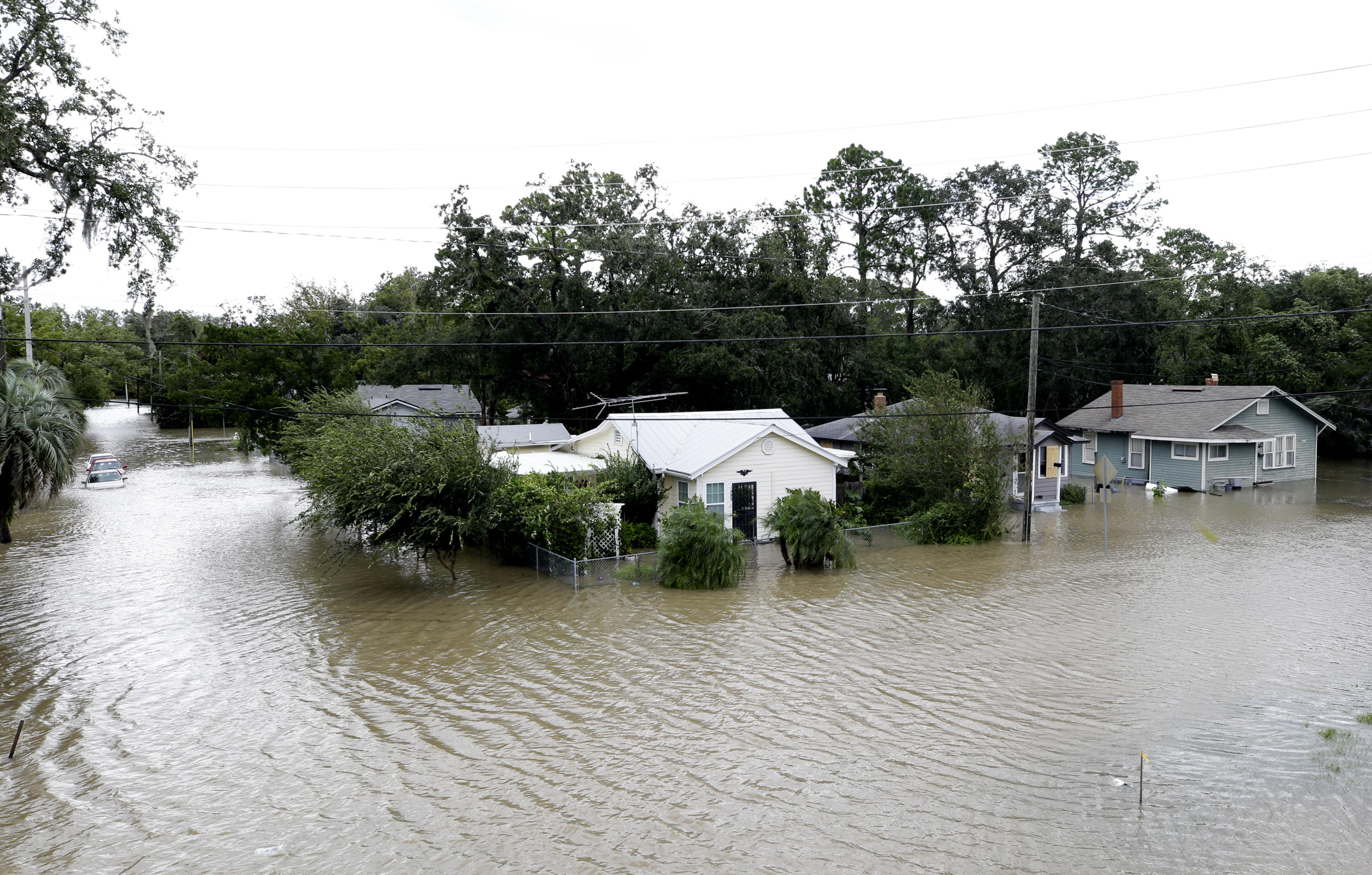 Florida residents got a first look of the destruction Hurricane Irma caused as it swept over the state, leaving virtually no area of the peninsula untouched.

According to the National Hurricane Center's 5 a.m. update on Tuesday, Irma weakened to a "post-tropical cyclone" status.

Some residents donned waders to slog through thigh-high water and stuffed bags with all of the belongings they could carry after being forced to leave apartment buildings and mobile homes.

Many were shaken by a storm they said was more powerful than they had ever seen.

Their stories provide a glimpse into the extensive reach of Irma's wrath:

"This is not safe"

Aide Valadares packed up her belongings Monday after Hurricane Irma ripped the roof off of her apartment complex in Miami.

She said water leaked into the top-floor apartments and the ceiling sagged in her one-bedroom unit below.

The walls bowed and cracked in the living room, where she had hung prints of her favorite paintings from Colombian painter Fernando Botero and Spanish artist Diego de Velazquez.

"You come home. You see this. It's devastating," she said. "The fire department came and said that structurally this is not safe," she said. "It will collapse."

Gwen Bush watched from her window early Monday morning as the water rose around her central Florida home. She had been sitting in darkness for hours as she listened to trees snap and water bubble. When it began to seep under her front door, she thought of the scenes of Hurricane Harvey in Texas that she had seen on TV.

"I was scared to death, I thought I was gonna die," she said. "I can't swim and the water kept rising; it was all the way up to my windows. I actually thought I was not going to live through this. I started praying."

Bush saw the National Guard and firefighters outside with boats and big trucks. She grabbed a hurricane kit she'd packed the day before, pushed open the door, and waded through thigh-deep water to reach the rescuers, who took her to a shelter a few miles away.

As day broke, she was grateful to be alive, but worried about the future. She had frantically tried to stack her belongings on top of beds and cabinets as the water rushed in, but she assumes she probably lost almost everything in her rented home.

Bush, 50, works as a security guard at a sports and music venue in Orlando, and only gets paid when she works. Concerts and shows were canceled in the days leading up to the storm, and she's not sure when she'll be able to get back to work.

As the storm closed in, she spent the last $10 she had on food and water. Now she has nothing left but the red sweatsuit she escaped in. Even her shoes were ruined by the water and muck.

"How are we gonna survive from here?" she said. "What's going to happen now? I just don't know."

Waiting on the bridge

Robert Hickok, a 51-year-old commercial fisherman, spent hours stranded in his truck on a bridge amid fast-rising waters as he tried to leave Plantation Island.

He decided to ride out the storm on the island, where he's lived for about four years, and sat tight through hours of rain and wind and flying debris. He was relieved when things became calm in the wee hours of Monday morning.

"It got real calm, you know," he said in a phone interview. "The rain let up and it quit blowing and I was still on the island and I thought it was all over."

But when he looked out the window 30 or 45 minutes later, the road was covered with water. As he watched, it began rising fast. He immediately got in his truck, but by the time he'd driven roughly a mile to the bridge, it was too late. Everglades City, on the other side of the bridge, was flooded and there was nowhere to go.

He hunkered down in his truck and hoped the water wouldn't rise any higher. At daybreak, the water began to recede and he was able to drive off the island.

He returned to his home around midday Monday to find it destroyed.

Ken Christian woke up at 5 a.m. Monday and saw water an inch below his door in the San Marco district near the St. Johns River in Jacksonville.

"I laid back down, and 30 minutes later, there was 3 inches in the apartment. At one point it got up to 3 feet. We got all the canned good we could and got out," he said.

The National Weather Service said the storm surge from Irma broke the flooding record in Jacksonville previously set by Hurricane Dora in 1964. It hit particularly hard along both shores of the St. Johns River that cuts through downtown.

Water was 4 feet deep in the three blocks of houses and apartments leading to the river. One man used his daughter's surfboard to paddle along streets to check out the damage.

Another man, Darin Van Gundy, waded through the streets to check on friends. He woke up at 6:30 a.m. to find water creeping up to his door. Within a few hours, the bottom floor of his two-story apartment had 4 feet of water.

"We lost some art we never imagined we could lose because we brought it up 4 feet, and it crested at 5 feet in spots," he said.

Don't laugh at that

Laura Keeney, of Key West, had her pet bird with her in a hotel lobby in Miami.

"He has been making so much noise in the room," said Keeney, who works as a concierge at the Hyatt in Key West.

She said that her apartment manager told her that her unit had flooded, but she didn't know the extent of the damage.

"They told me, 'There is definitely water in the downstairs apartment,' which is me," she said.

"He is laughing at the most inopportune moments," she said.

West of Miami, in Sweetwater, the din of chainsaws and generators filled the Monday morning air. Irma's floodwaters had inundated streets and lapped at people's doors as the storm stomped through, but mostly receded a day later.

Fallen trees lined streets along with cars that got stuck in floodwaters. On the town's main drag, weary-eyed residents cleared branches, while city trucks with giant metal claws plucked away bigger debris.

Jesus Castillo, 50, said at least a foot of water pooled outside his home. "My entire patio was underwater," he said.

Around the corner, a group of friends helped a woman clear a large tree that had splintered like a toothpick. Over the backyard fence, 62-year-old Bayardo Perez wrestled with a mangled tin shed roof. He has lived in the house for decades and carries memories of previous storms.

"This one was worse than Andrew for me," he said, finally getting the crumpled roof free and walking off to throw it on a pile of debris.

In Bonita Springs, on the Gulf Coast south of Fort Myers, Kelly McClenthen and her boyfriend, Daniel Harrison, put on waders to enter her neighborhood Monday and they needed them: About 5 feet of river water stood under her home, which is on stilts.

The main living area was fine, she said, but everything on the ground level was destroyed.

"My washer and dryer are floating around in my utility room," she said.

The same area flooded during a storm about two weeks ago, Harrison said, and that cleanup was still a work in progress.

"We weathered it out. We've got a lot of damage, a lot of cleanup. But we'll get through it. No doubt," said Harrison.

At Germain Arena in Estero, south of Fort Myers, where thousands sought shelter from the storm, people sat amid puddles on the concrete floor Monday morning. Rainwater leaked at the height of the storm.

"Irma went over and we were all like, 'Oh good, we survived.' And then all of a sudden, some of the panels came off the roof, I guess, and we started getting water pouring down in different places," said 61-year-old evacuee Mary Fitzgerald. "It was like, 'Oh my God, what is going to happen?'"

The water stopped coming in after the eyewall passed, and people were streaming out to go check on their homes as the sun came up.

Larry Dimas and his wife, Elida, live in Immokalee, in inland Florida town about 40 miles northeast of Naples where entire areas were flooded.

The Dimases lost part of the roof of their mobile home to Irma, and one wall wobbled to the touch.

Cars and trucks drove slowly through a main intersection Monday to avoid causing wakes next to homes and businesses. Kids rode bikes on streets covered in water.

Larry Dimas said damage from Irma won't be easy to overcome in a town whose population is composed mainly of migrants and blue-collar workers.

"They just go to work and come home. Something like this happens and it's just ...," Dimas said, pausing and turning around to keep his emotions in check.

Dimas said it's still OK to live in his mobile home, but his wife disagrees.

"I'm going to get there"

Joseph McCord in Jacksonville would have probably not taken the hurricane barreling toward Florida too seriously.

But he grew up in Beaumont, Texas, and lived there most of his life. A few weeks ago, his parents' home was ruined by Hurricane Harvey. They lost everything.

"So I thought, I'm not taking any chances with this one," said McCord, who moved to Jacksonville two years ago.

He piled everything in his car and drove it to his work on high ground, where he had to stay all night to wait out the storm.

It was good that he did. He came back home to find his whole neighborhood of San Marco under water -- the worst flood in Jacksonville in a century. It was one of several Jacksonville neighborhoods overtaken by rushing water from the St. Johns River and its tributaries as Hurricane Irma took its final lick at Florida.

Search and rescue teams pulled people from their homes. Residents circled the streets in kayaks and canoes, as trash, shoes, furniture, lamp shades bobbed by.

The water receded from McCord's house, though the surrounding streets remain under the flood. He tried to get home, but a police officer told him not to even try, that he'd get stuck there and they'll have to rescue him.

"I'm going to get there," he declared and marched on.

A new home, left behind

Felicia Clark and Johnny Thompson spent Saturday moving into their new house in St. Petersburg, on Florida's Gulf Coast. After a long day, with forecasts showing that Irma was headed their way, they decided to leave it behind.

They packed some clothes and toiletries and hopped in the car around 1 a.m. Sunday with their two dogs, Gracie and Roscoe. They headed north, making it all the way to downtown Atlanta before they found a hotel with rooms available.

Caught in traffic with others who'd decided to flee the storm, the drive that should have taken about seven hours took more than 14.

They've spent much of their time in Atlanta watching storm coverage on television. When Thompson took the dogs out for a walk in nearby Centennial Olympic Park on Sunday night, he met numerous other evacuated Florida residents.

Clark and Thompson were worried about their new home, but word finally arrived from family members who stayed behind.

Some tree limbs fell in their yard, but the house wasn't damaged.