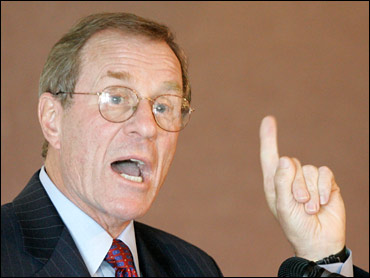 Oregon's governor, Theodore Kulongoski, called a gaggle of his closest friends to a photo op Tuesday that few could pass up. As part of his "Food Stamp Challenge" week, the governor is attempting to live on a food budget of $21 per week, which is about the average benefit for an Oregon food stamp recipient, according to the governor's press release.

Associated Press photos showed the governor pushing a shopping cart and ostentatiously relinquishing a noodle cup and two bananas at the checkout counter when his total topped $21. "Could you feed yourself for $3 a day?" demanded headline in the next morning's Oregonian.

Let us stipulate that in a country as wealthy as ours, the idea that anyone should go hungry is unacceptable.

But is that what's really happening? Why is it that whenever you listen to a Democrat you feel that the year is 1966? They seem to live in a time warp in which no progress has been made on race relations, poverty, childhood malnutrition, and on and on.

Let's start with some numbers. If you go the state of Oregon's Web site and calculate your eligibility for food stamps, you will find that a family of four with no income (and 70 percent of food stamp recipients do not work at all) is entitled to $518 monthly or about $32 weekly for each person. This is a very rough estimate because all sorts of factors are taken into account in calculating eligibility, including number of dependents, housing costs, expenses, and other income. Perhaps the governor's office is correct that the average food stamp allotment in the state is $21. But that means some get more and some less. Eligibility is based on need.

Now even $32 seems like a very small amount of money per person, but that is only a small part of the largesse provided by the U.S. government, which spent $522 billion on low-income assistance programs in 2002. It doesn't count hot breakfasts and lunches at school (which push high-calorie, high-fat diets on kids). It doesn't count the Earned Income Tax Credit by which the working poor get cash back from the federal government ($41.4 billion went to 22.2 million recipients last year, according to the Los Angeles Times). It doesn't include housing subsidies, Medicaid, or the Supplemental Security Income program, which can free up funds for food. Nor does it count the WIC program, the Special Supplemental Nutrition Program for Women, Infants, and Children.

The WIC program provides highly caloric packages of juice, cereal, eggs, and other food to pregnant women, nursing mothers and children up to the age of 4. WIC also provides baby formula, thus discouraging the poor from breast-feeding their babies. About 50 percent of the formula sold in the U.S. goes to families using WIC. Formula-fed babies are more likely to be overweight, suffer ear infections, have allergies, and, if you believe some of the data, have lower IQs than breast-fed infants.

Douglas Besharov of the American Enterprise Institute notes that while he can recall visiting rural Mississippi in the 1960s and seeing severe cases of malnutrition, the problem among the poor today is more likely to be obesity. Today, 70 percent of low-income Americans are overweight, compared with 60 percent of the non-poor. The mean intake of poor children aged 6-11 was 2,000 calories a day in 1994 compared with 1,969 calories for non-poor children of the same age. President Bill Clinton's secretary of agriculture, Dan Glickman, acknowledged that "The simple fact is that more people die in the United States of too much food than of too little, and the habits that lead to this epidemic [obesity] become ingrained at an early age."

We are pushing food at the poor as if hunger and malnutrition still crouched at the door when the bigger threat these days is saturated fat and excess sugar. The Food Stamp program arguably needs a massive reform, offering cash grants instead of vouchers or credit cards, which encourage over-consumption. Is it too much to ask that politicians and journalists (that photo of Gov. Kulongoski showed up everywhere) address today's problems and not those of 40 years ago?
By Mona Charen
Reprinted with permission from National Review Online