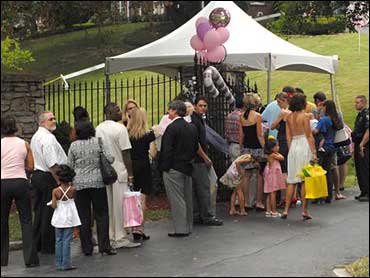 It was a party fit for a princess, complete with a castle and white carriage.

Pink balloons decorated the iron gates in front of socialite Tricia Barnstable Brown's home, where Smith and Dannielynn's father, Louisville native Larry Birkhead, met at a party on the eve of the 2003 Kentucky Derby.

"It really was great to see her smile, especially through all the things that we've been through, just to get to that milestone of one year was just great," Birkhead said.

Invited guests had to surrender their cell phones before entering and sign a release form promising not to take any pictures. Dozens of children attended the party with their parents.

Some guests arrived in limousines and stretch Humvees, bearing large stuffed animals and other gifts. One guest was seen carrying a large pencil drawing of Dannielynn, whose actual birthday was Friday.

"My daughter had a really, really good time," Birkhead said. "Barney the dinosaur came and gave a special performance. The kids loved it."

A hot-air balloon shaped as a birthday cake adorned the front yard. Yellow police tape stretched around the yard in the posh Louisville neighborhood, and about a half-dozen off-duty police officers guarded the property.

One guest, Tina Showalter of Louisville, said she had known Birkhead most of his life. Showalter said she left the party about 15 minutes after arriving mainly because it was so crowded.

"Everything is a little frenzied in there," she said.

Showalter said that in the back yard there was "a huge castle as big as a house," along with bubble machines and a white carriage.

About a dozen onlookers hoped to get a glimpse of a celebrity, but they left disappointed.

Leslie Rizzo, 27, staked out the party with her mom, Diane, hoping see Dannielynn.

"She has to come out sometime," Leslie Rizzo said, clutching a digital camera.

Smith, a former Playboy Playmate, gave birth to Dannielynn a few days before the death of her son, Daniel, 20, in the Bahamas. Smith died of an accidental drug overdose in Florida in February at the age of 39.

Howard K. Stern, her lawyer and companion, initially claimed to be Dannielynn's father, but Smith's ex-boyfriend Birkhead eventually proved that he was the father.