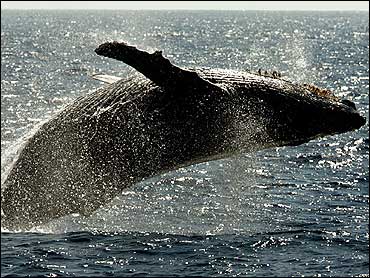 The humpback whale, nearly hunted into history four decades ago, is now on the "road to recovery" and is no longer considered at high risk of extinction, an environmental group said Tuesday.

The International Union for Conservation of Nature — the producer each year of a Red List of threatened species — also upgraded the status of the southern "right" whale from vulnerable. The right whale gets its name from whalers who deemed it a particularly good species to hunt, because it floats after being killed.

"Humpbacks and southern right whales are making a comeback in much of their range mainly because they have been protected from commercial hunting," said Randall Reeves, an expert on marine mammals for the conservation organization.

"This is a great conservation success and clearly shows what needs to be done to ensure these ocean giants survive," he said in a statement.

Bill Perrin, another expert at the group known by its acronym IUCN, said the humpback whale population dropped to the "low thousands" when it was finally banned from commercial hunts in 1966. Its numbers have since risen to at least 60,000, Perrin said, adding that the population is growing at a healthy rate of 5 percent each year in the North Pacific.

While the right whales that hug the southern coasts of Argentina, South Africa and Australia are also recuperating, their cousins in the north are struggling.

There may be only 300 North Atlantic right whales along the U.S. Eastern Seaboard, Perrin said. While hunting them is illegal, many continue to be wounded or killed in collisions with ships or entanglements with fishing gear, he added.

The IUCN said a number of other large sea animals were moving closer to extinction. Overall, nearly a quarter of all such species are threatened and over a 10th are listed as endangered or critically endangered, representing the greatest threat of extinction.

The Irrawaddy dolphin of southeast Asia, the finless porpoise that swims from the Persian Gulf to the coast of north Japan and South America's franciscana dolphin are all considered vulnerable — largely because they are often a bycatch in fisheries.

In Mexico's Gulf of California, the vaquita porpoise will probably be the next animal of this type to become extinct. Already critically endangered, about 15 percent of those remaining are killed each year in gill nets, the organization said. It estimated that only 150 are left in the wild.

Noting the decline in hunts of whales and other sea mammals over the last few decades, the IUCN said accidental killing in fishing gear was now the "main threat" to these species. Those being particularly hard hit also include the Black Sea harbor porpoise and the western gray whale.

The organization, based in Gland, Switzerland, near Geneva, also cited military sonar as a threat to deep-diving beaked whales such as the melon-headed whale, common in tropical waters. Sonar, combined with seismic surveys and shipping, creates noise that often leads to the unnecessary death of whales and dolphins by affecting their ability to communicate and forcing them to abandon feeding grounds.

The Red List, produced by the IUCN's worldwide network of thousands of experts, includes some 41,000 species and subspecies around the globe. The total number of species is unknown, but is widely estimated at 15 million. Only about 1.75 million have been documented. Many will be extinct even before they are discovered.

IUCN, which is made up of more than 1,000 government and non-governmental organizations, says it has almost 11,000 volunteer scientists in more than 160 countries.