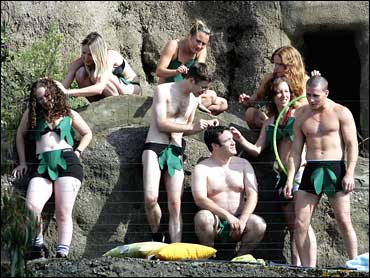 At London Zoo, you can talk to the animals — and now some of them talk back.

Caged and barely clothed within a rocky enclosure, eight British men and women monkeyed around Friday for an amused, bemused crowd behind a sign reading "Warning: Humans in their Natural Environment."

The captives in the Human Zoo exhibit sunned themselves on a rock ledge, clad in bathing suits and pinned-on fig leaves. Some played with hula hoops, some waved. A signboard informed visitors about the species' diet, habitat, worldwide distribution and threats.

Visitors stopped to point and laugh, and several children could be heard asking "why are there people in there?"

"Seeing people in a different environment, among other animals ... teaches members of the public that the human is just another primate," Wills said. It also, she conceded, lets them "have a gawk at people."

The exhibit, which opened Friday, puts the three male and five female Homo sapiens side by side with their primate relatives — though separated from them by an electric fence. While their neighbors might enjoy bananas and a good scratch, these eight — chosen from 30 applicants who entered an online contest — have diverse interests, from a chemist hoping to raise awareness about apes to a self-described actor/model and fitness enthusiast.

Chemist Tom Mahoney, 26, decided to participate after his friend sent him an e-mail about the contest as a joke. Anything that draws attention to apes, he said, has his support.

"A lot of people think humans are above other animals," he said. "When they see humans as animals, here, it kind of reminds us that we're not that special."

Actor Brendan Carr, 25, won his place by submitting a spot of anthropomorphic verse: "I'm funky like a monkey and as cool as a cat, talk more than a parrot, up all night like a bat."

Visitors' reactions to the spectacle varied Friday. Pointing at one heavily muscled and gleaming body on the ledge, a visitor joked that the zoo should consider a breeding program.

"You can tell why some people came here, like the big muscly men who clearly like parading around in thongs," said Damien Largey, 23.

Melissa Wecker, 21, was disappointed that the humans were wearing swimsuits beneath their fig leaves. "They're not doing anything. It looked lots better on the news," she complained.

Mark Ainsworth, 21, also heard about the Human Zoo on the news.

"I've lived in this country for nine years and have never come to a zoo," said Ainsworth, who came with Wecker. "This exhibit made us come to the zoo. Humans are animals too."

The human captives were kept well-fed and watered by zoo staff, who took care to ensure they did not grow bored. A supply of board games was on hand, and some said they were looking forward to tuning into the England-Australia cricket match on the radio.

Unlike the zoo's non-human inhabitants, they are allowed to go home each night at closing time. The event runs until Monday.

When visitor Peter Bohn, 42, saw the "animals" juggling, he stopped and had a good laugh.

"It's hilarious," he said. "It turns everything upside down. It makes you think about the humans in relation to the animals."

After three hours strutting his stuff on a cool late-summer day, Mahoney said he was still having fun, except when the wind picked up. But, he added, "I wouldn't do it if I didn't enjoy it."