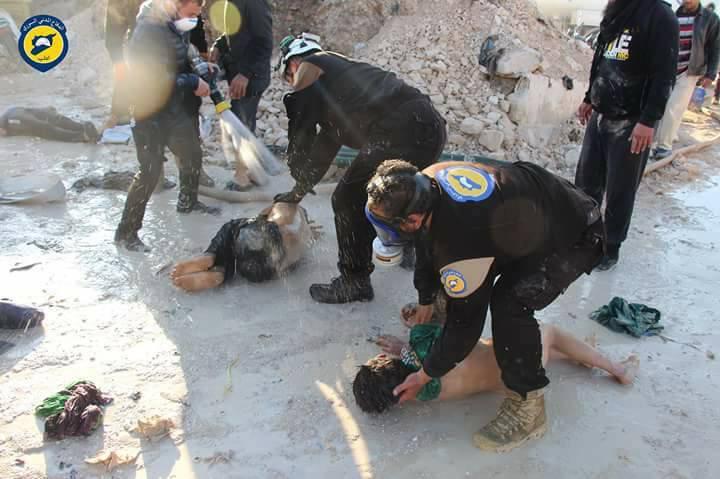 Syrian government forces have dramatically escalated their use of chemical weapons attacks against civilians, according to a report released today by Human Rights Watch.

"The government's recent use of nerve agents is a deadly escalation – and part of a clear pattern," said Kenneth Roth, the executive director of the non-profit.

"In the last six months, the Syrian government has used war planes, helicopters, and ground forces to deliver chlorine and sarin gas in Damascus, Hama, Idlib and Aleppo; that is widespread and systematic use of chemical weapons," says Ole Solvang, Deputy Director, Emergencies, Human Rights Watch. That, Solvang says, could amount to crimes against humanity.

The 48-page report, "Death by Chemicals: The Syrian Government's Widespread and Systematic Use of Chemical Weapons," identifies three different systems being used to deliver chemical weapons:

It also says research shows that many of the attacks appear to be against civilians, and new evidence, according to the report, supports the conclusion that Syrian government forces have used nerve agents on at least four occasions in recent months: On April 4, 2017 in Khan Sheikhoun, and on three other occasions in December 2016 and March 2017, based on interviews with 60 people with first-hand knowledge of the attacks and their immediate aftermath, as well as dozens of photos and videos of impact sites and victims, although the non-profit was unable to conduct ground investigations of the attack sites itself.

"It is time for Moscow and Damascus to come clean... about these violations of international law," Roth told reporters after the report was released. He said that war crimes have been committed.

France's foreign minister last week said that chemical analysis of samples taken from the Idlib attack shows that the nerve agent used "bears the signature" of President Bashar Assad's government and shows it was responsible. Turkish and British tests also showed that sarin or a substance similar to the deadly nerve agent was used.

Assad's former chemical weapons research chief, former Brig. Gen. Zaher al-Sakat said that Syria had "at least 2,000 tons" of chemical weapons before the war but only declared 1,300. He said the Syrian government was still in possession of hundreds of tons of the material.

Ibrahim Al-Assil, Resident Fellow at the Middle East Institute in Washington, D.C., told CBS News that the agreement to ban chemical weapons did not include all of those that existed in Syria – a flaw in the agreement – and now evidence shows that "Syria has used sarin gas against civilians."

Following the attack in Idlib, Secretary of State Rex Tillerson, said, "While we continue to monitor the terrible situation, it is clear that this is how Bashar al-Assad operates: with brutal, unabashed barbarism."

"Those who defend and support him, including Russia and Iran, should have no illusions about Assad or his intentions…anyone who uses chemical weapons to attack his own people shows a fundamental disregard for human decency and must be held accountable," Tillerson said.

At the United Nations, British Ambassador Matthew Rycroft spoke directly to Russia: "What is your plan to stop these horrific senseless attacks?" Rycroft asked. "We had a plan, and we had the support, and you rejected it to protect Assad."

The Human Rights Watch report documents many of the attacks including the use by government or pro-government ground forces of improvised surface-fired rockets containing chlorine to attack territory near Damascus controlled by armed groups fighting the government.

Nonetheless, the U.N. has grappled with an impasse with regard to a Security Council response to what is believed to be the worst chemical weapons attack in years in a six-year conflict that has left 500,000 people dead and created five million refugees.

A resolution circulated in April by the U.S., U.K. and France condemning the attack was blocked by Russia, leaving council members with few options beyond condemning the attack and issuing calls for more robust negotiations. U.S. Ambassador Nikki Haley, acting as the council's rotating president for the month of April, presided over the 15-member Security Council meeting in New York.

Speaking of the Idlib attack, she said, "Yesterday's attack was a new low even for the barbaric Assad regime… Russia cannot escape responsibility."

In a news conference with King Abdullah II of Jordan at the White House, Mr. Trump said the "heinous actions by the Assad regime cannot be tolerated," adding his "attitude towards Syria and Assad has changed very much."

Lou Charbonneau, the United Nations director at Human Rights Watch, told CBS News, "the Syrian government appears to be emboldened it its use of chemical weapons."

The Human Rights Watch report makes almost two dozen recommendations: to the U.N. Security Council, the Syrian government, non-state armed groups, the Russian and Iranian governments, and to U.N. member states, including a travel ban and asset freeze on those in the Syrian government and military chain of command responsible for chemical attacks that the U.N. and OPCW have confirmed and to refer the situation to the International Criminal Court (ICC).

At the U.N., much of the ire is directed at Russia for blocking Security Council action.

"How many children have to die before Russia cares?" U.S. envoy Haley said.

Garett Bayley, Britain's Special Representative for Syria said, "The people of Syria should be protected by their government; their children should be growing up safe and healthy; Instead they are the innocent victims in a conflict that has brought untold suffering, death and displacement."