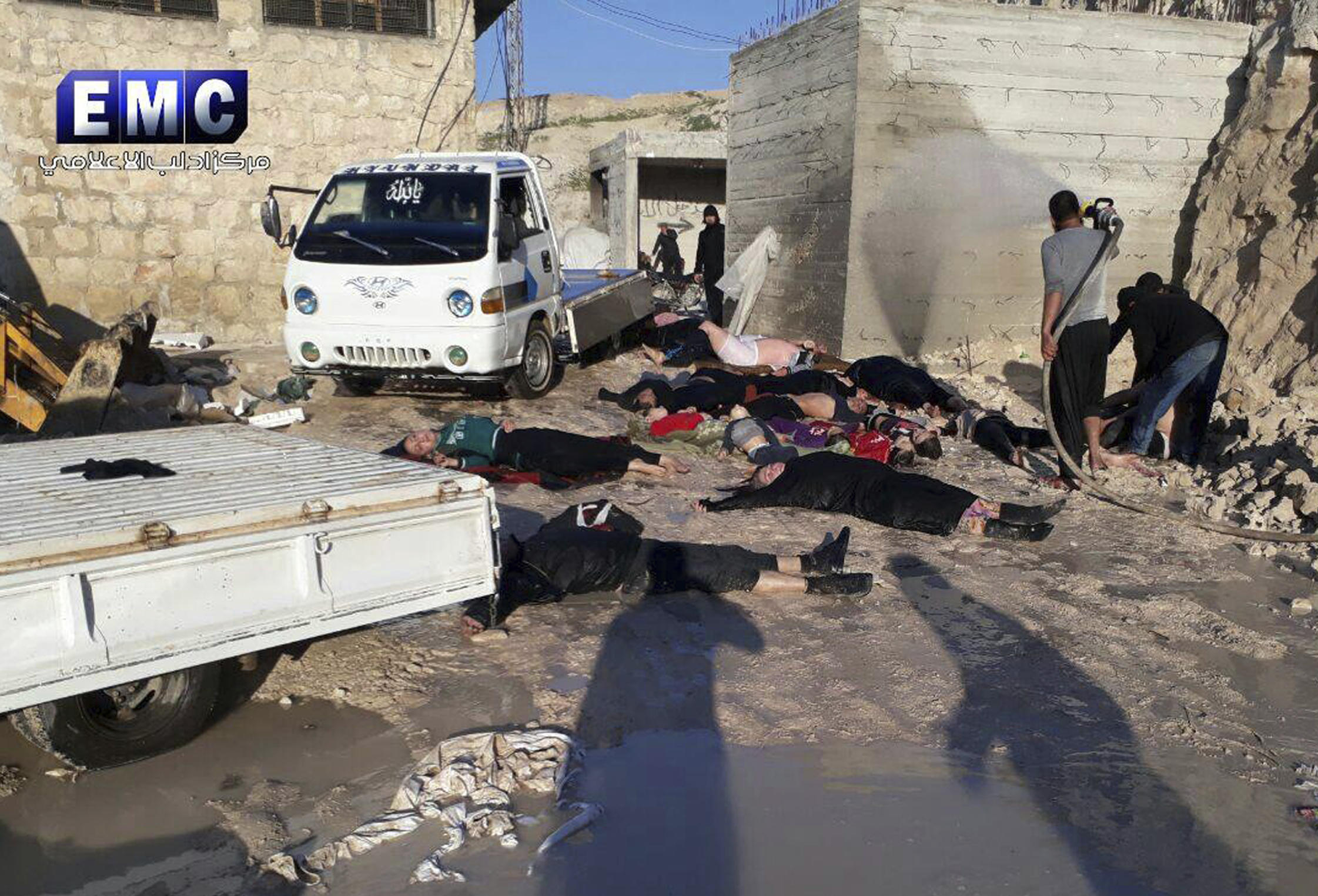 BEIRUT -- A Syrian monitoring group said Wednesday the death toll from a suspected chemical attack on a northern town the previous day had increased to 72, even as activists reported renewed airstrikes on the rebel-held town that was hit in the harrowing assault -- and Russia blamed the rebels.

The Britain-based Syrian Observatory for Human Rights says 20 children and 17 women are among the 72 killed.

Ahmed al-Sheikho, of the Idlib Civil Defense team, said the latest airstrikes hit near where the suspected chemical attack occurred, in Khan Sheikhoun.

He said the strikes didn’t cause any casualties because the area had been evacuated following Tuesday’s attack.

Activists and rescue workers kept finding more terrified survivors hiding in shelters near the site of the attack, which left residents gasping for breath and convulsing in the streets and overcrowded hospitals.

Videos from the scene showed volunteer medics using fire hoses to wash the chemicals from victims’ bodies. Haunting images of lifeless children piled in heaps reflected the magnitude of the attack, which was reminiscent of a 2013 chemical assault that left hundreds dead.

The Trump administration blamed the government of President Bashar Assad for the attack, saying his patrons, Russia and Iran, bore “great moral responsibility” for the deaths.

The U.N. Security Council was to hold an emergency meeting Wednesday on the attack, which activists say was one of the worst in the country’s six-year civil war, in which nearly 400,000 people have been killed and half of Syria’s population has been displaced.

The pope said Wednesday during his general audience that he was “watching with horror at the latest events in Syria,” and said he “strongly deplored the unacceptable massacre.”

He called on the “conscious of those with political responsibility both locally and internationally to cease this tragedy and bring relief to that dear population that for too long has been exhausted by war.”

He also encouraged those bringing aid to the stricken population “even amid insecurity and discomfort.”

U.N. Secretary General Antonio Guterres on Wednesday called the attack a “moment of truth” that must be investigated.

Guterres told reporters at a Syria donor conference in Brussels he hopes “this moment will be able to mobilize the capacity of all those that have responsibilities in this situation.”

He said, “The horrific events of yesterday demonstrate that unfortunately, war crimes are going on in Syria, that international humanitarian law remains being violated frequently.”

NATO’s chief also joined the chorus of world leaders condemning the attack and calling for those responsible to be held accountable. Jens Stoltenberg pointed out in a statement Wednesday that “this is the third report of the use of these barbaric weapons in the last month alone.”

British Foreign Secretary Boris Johnson said Wednesday “all the evidence” he had seen “suggests this was the  Assad regime who did it in the full knowledge that they were using illegal weapons in a barbaric attack on their own people,” adding that he “would like to see those culpable pay a price for this.”

Johnson spoke at the start of the Brussels conference, where the U.N., European Union and world financial institutions were seeking billions of dollars in aid for the war-ravaged nation.

Meanwhile, the Russian Defense Ministry claimed the rebel-held town in northern Syria had been exposed to toxic agents from a rebel arsenal hit by a Syrian air strike.

Konashenkov said chemical weapons produced by the factory were used in Iraq.

He added that the same type of chemical weapons had been previously used by the rebels in Aleppo, where they had caused symptoms similar to those seen in images from Khan Sheikhoun.

The Russian statement followed an international outcry over the attack on Khan Sheikhoun.

Both Russia and Syria both have denied launching the chemical attack.