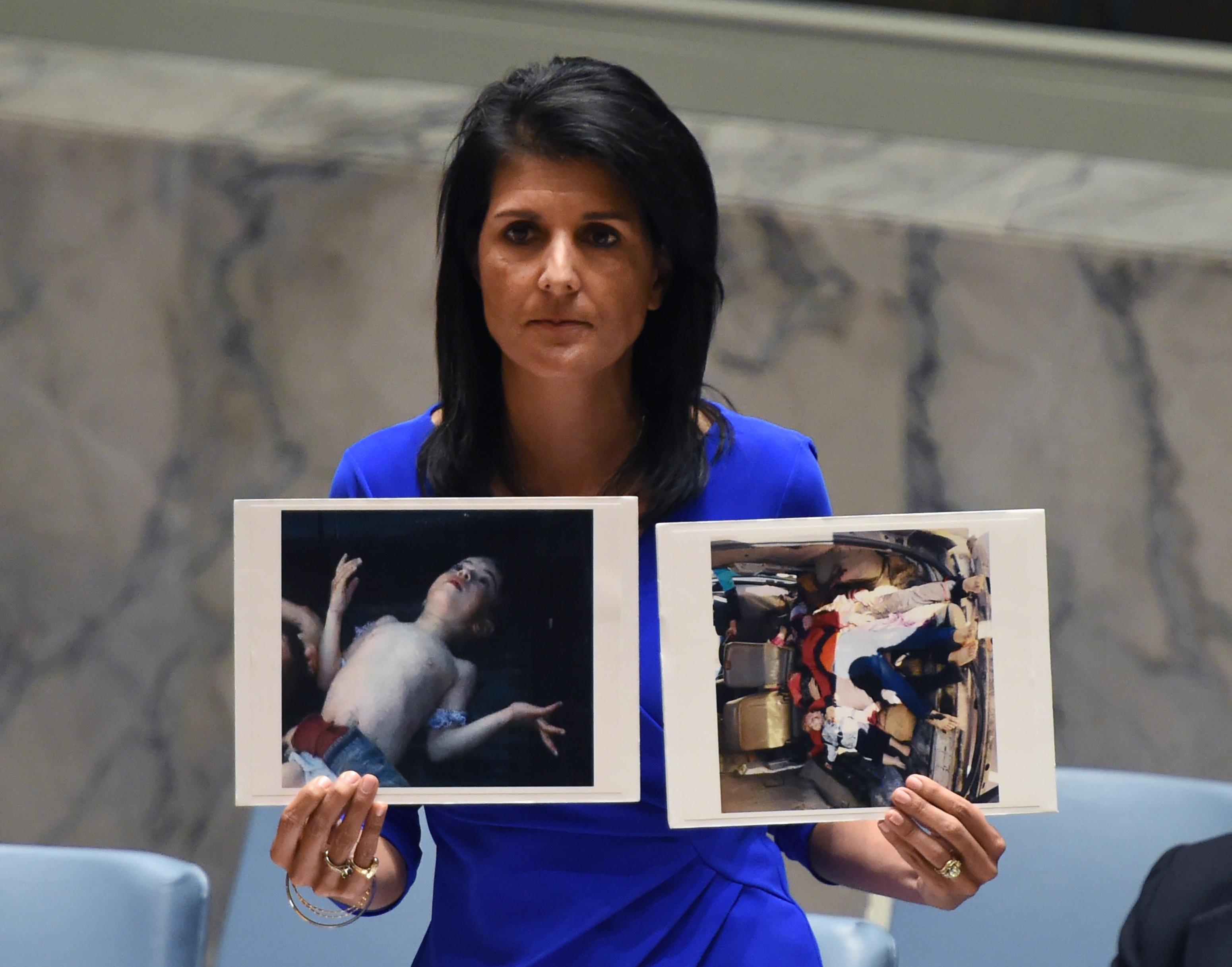 UNITED NATIONS -- The U.N. Security Council grappled with how to respond to what is believed to be the worst chemical weapons attack in years, as world powers traded blame for Tuesday’s massacre in Syria that killed at least 72 people, many of them children.

There was little doubt that forces loyal to Syrian President Bashar Assad were to blame for the civilian deaths in Idlib province, the most recent apparent war crime in a six-year conflict that has left 500,000 people dead and created five million refugees.

The U.S. and Russia traded barbs over who was to blame for the apparent chemical attack. U.S. Ambassador Nikki Haley, acting as the council’s rotating president for the month of April, presided over the 15-member Security Council meeting Wednesday in New York.

“Yesterday’s attack was a new low even for the barbaric Assad regime… Russia cannot escape responsibility,” Haley said, adding that if the U.N. does not act, members may be forced to shape their own policies.

Russia asked for more time to consider the resolution circulated by the U.S., Britain and France, which included a condemnation of the “horrific” attack and called for specific steps to investigate who was responsible.

Deputy Ambassador Vladimir K. Safronkov of Russia was dismissive of the resolution, calling it “hasty” and saying it would not deserve its place in the “landfill of history.”

Repeating an accusation made by President Trump, Safronkov placed blame squarely on former President Obama for failing to enforce his famous “red line” policy on the use of chemical weapons.

“That was the starting line of terrorists to use force against a sovereign state,” Safronkov said.

In a news conference with King Abdullah II of Jordan at the White House, Mr. Trump said the “heinous actions by the Assad regime cannot be tolerated,” adding his “attitude towards Syria and Assad has changed very much.”

The administration recently indicated a shift in policy toward Assad, with Secretary of State Rex Tillerson suggesting the U.S. would abandon its insistence on regime change.

Western leaders called on Russia and Iran to prevent future chemical attacks that many diplomats consider a war crime.

“If Russia has the influence in Syria that it claims to have, we need to see them use it,” Haley said Wednesday. “We need to see them put an end to these horrific acts. How many children have to die before Russia cares?”

Diplomats from the U.S., U.K. and France huddled after the open session to draft a compromise resolution that the council could pass.

“What is your plan to stop these horrific senseless attacks?” Rycroft asked. “We had a plan, and we had the support, and you rejected it to protect Assad.”

Haley stood at her Security Council seat and showed pictures of the victims.

In Idlib, with so many children dead and gasping for air, rescue workers struggled to find sanity in a civil war that has dragged on for years with no end in sight.

The Security Council meeting comes at a time when the options to resolve the conflict are dwindling while the suffering continues unabated.

Hamish de Bretton Gordon, a former chemical and biological weapons chief for the British army, told CBS News that the images and videos of the attack suggest the use of a nerve agent rather than chlorine, which is much more readily available and far less lethal.