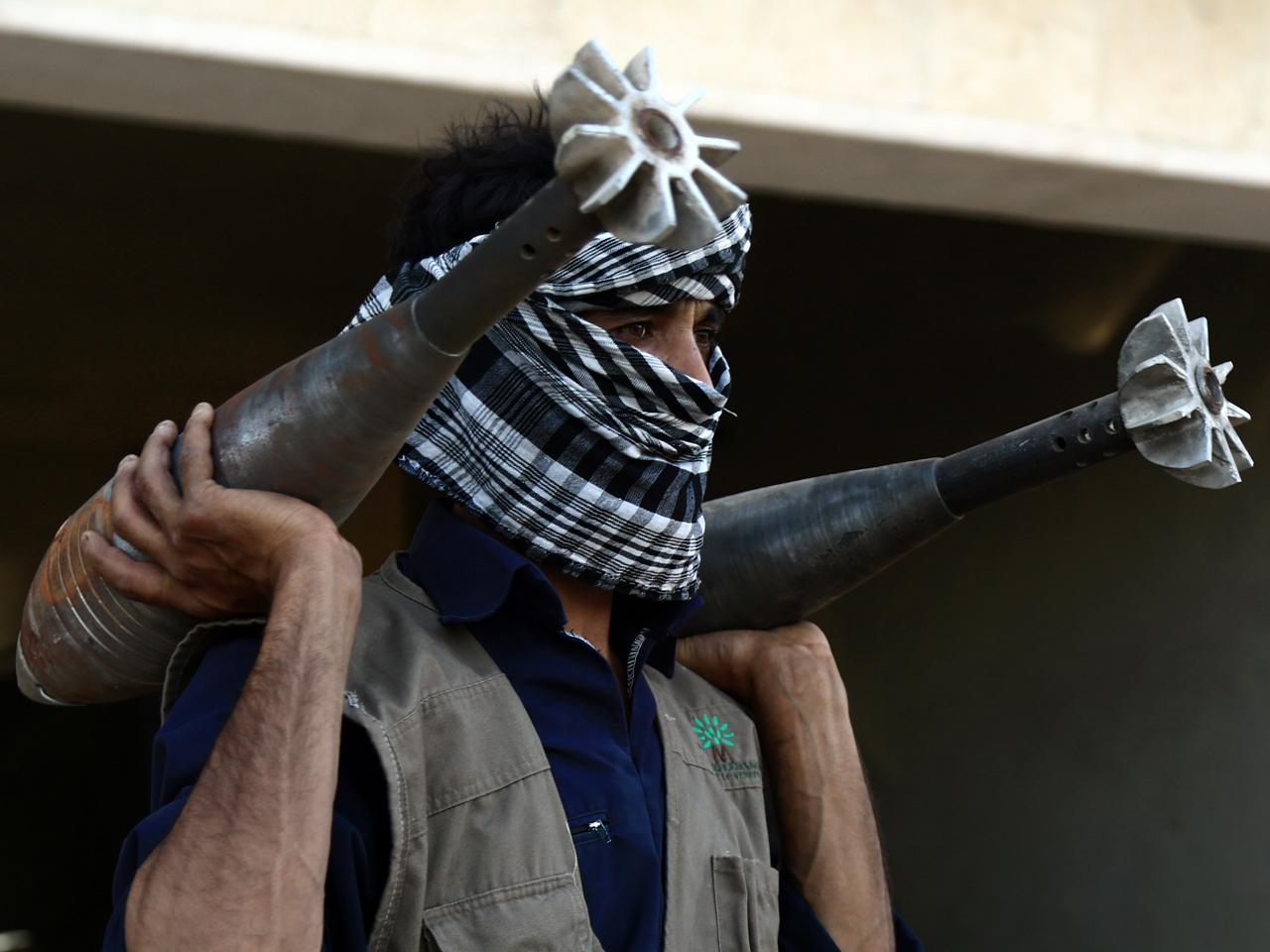 The Aug. 4 attacks on unarmed civilians in more than a dozen villages in the coastal province of Latakia were systematic and could even amount to a crime against humanity, Human Rights Watch said in a 105-page report. The findings are based on a visit a month later to the area, with permission from the Syrian regime.

The villagers belong to the minority Alawite sect, an offshoot of Shiite Islam which forms the backbone of President Bashar Assad's regime - and which Sunni Muslim extremists consider heretics.

One survivor, Hassan Shebli, told HRW he fled as rebels approached his village of Barouda at dawn, but was forced to leave behind his wife, who was unable to walk without crutches, and his paralyzed 23-year-old son.

When Shebli returned days later, after government forces retook the village, he found his wife and son buried near the house and bullet holes and blood splattered in the bedroom, the New York-based group said.

The findings are bound to feed mounting Western unease about the tactics of some of those trying to topple Assad and about the growing role of jihadi rebels, including foreign fighters linked to al Qaeda.

The main Western-backed rebel alliance, the Free Syrian Army, distanced itself from the five rebel groups named by the HRW as the main perpetrators.

"Anyone who commits such crimes will not belong to the revolution anymore," said spokesman Louay Mikdad.

He said the alliance is not cooperating with extremist groups, and that al-Qaeda -linked rebels frequently attack FSA fighters.

A rebel in the Latakia area, who goes by the name of Mohammed Haffawi, denied civilians were killed during the offensive. Reached by Skype, he said one of the rebel groups is holding about 100 women and children as bargaining chips for the release of prisoners held by the regime.

U.N. war crimes investigators have accused both sides in Syria's civil war, now in its third year, of wrongdoing, though they said earlier this year that the scale and intensity of rebel abuses hasn't reached that of the regime.

The new allegations of rebel abuses come at a time when the regime is regaining some international legitimacy because of its apparent cooperation with an internationally mandated program to destroy Syria's chemical weapons stockpile by mid-2014.

Lama Fakih of Human Rights Watch said the rebel abuses in Latakia "certainly amount to war crimes," and may even rise to the level of crimes against humanity.

The group said more than 20 rebel groups participated in the Latakia offensive.

Five groups, including two linked to al Qaeda and others with jihadi leanings, led the campaign, which appeared to have been funded in part by private donations raised in the Persian Gulf, the report said.

Human Rights Watch appealed to the Gulf states to crack down on such money transfers. It also urged Turkey, a rear base for many rebel groups, to prosecute those linked to war crimes and restrict the flow of weapons and fighters.

The Western-backed Syrian opposition must cut ties with the groups that led the Latakia offensive, the report said.

Most of the alleged attacks on civilians occurred on Aug. 4, said the group. The campaign began with rebel fighters seizing three regime posts and then the villages. After the regime positions fell, no pro-government troops were left in the Alawite villages. It took government forces two weeks to recapture all the villages.

Human Rights Watch said at least 67 of the 190 civilians slain by the rebels were killed at close range or while trying to flee. There are signs that most of the others were also killed intentionally or indiscriminately, but more investigation is needed, the group said.

The rebels seized more than 200 civilians from the Alawite villages, most of them women and children, and demanded to trade the hostages for prisoners held by the regime.

The HRW report said the rebel groups that led the offensive included Jabhat al-Nusra and the Islamic State in Iraq and the Levant, both linked to al Qaeda; Ahrar al-Sham; Jaish al-Muhajireen wal-Ansar; and Suqqor al-Izz.

In fighting Friday, Syrian warplanes bombed the rebel-held northern town of Safira for a second day, killing two people, said the British-based Observatory for Human Rights, which relies on a network of activists on the ground.

A regime-controlled military complex believed to include chemical weapons facilities is located near the town.

The team is to visit more than 20 sites, and has so far inspected three. Safira would likely be one of the sites to be visited, and its location close to fighting highlights the complexity of the inspectors' mission.

Near the capital Damascus, Syrian forces and pro-regime fighters recaptured two towns close to a Shiite shrine, according the Observatory and a pro-government TV station.

The troops seized the towns of Ziyabiyeh and Husseiniyah after four days of clashes with rebels, said Rami Abdul-Rahman of the Observatory. He said fighting continued on the towns' edges.

Syria's two-year civil war has taken on strong sectarian overtones. Many of the rebels are Sunni Muslims, while Syria's patchwork of minorities, including Shiites, has largely stood behind the Assad regime.