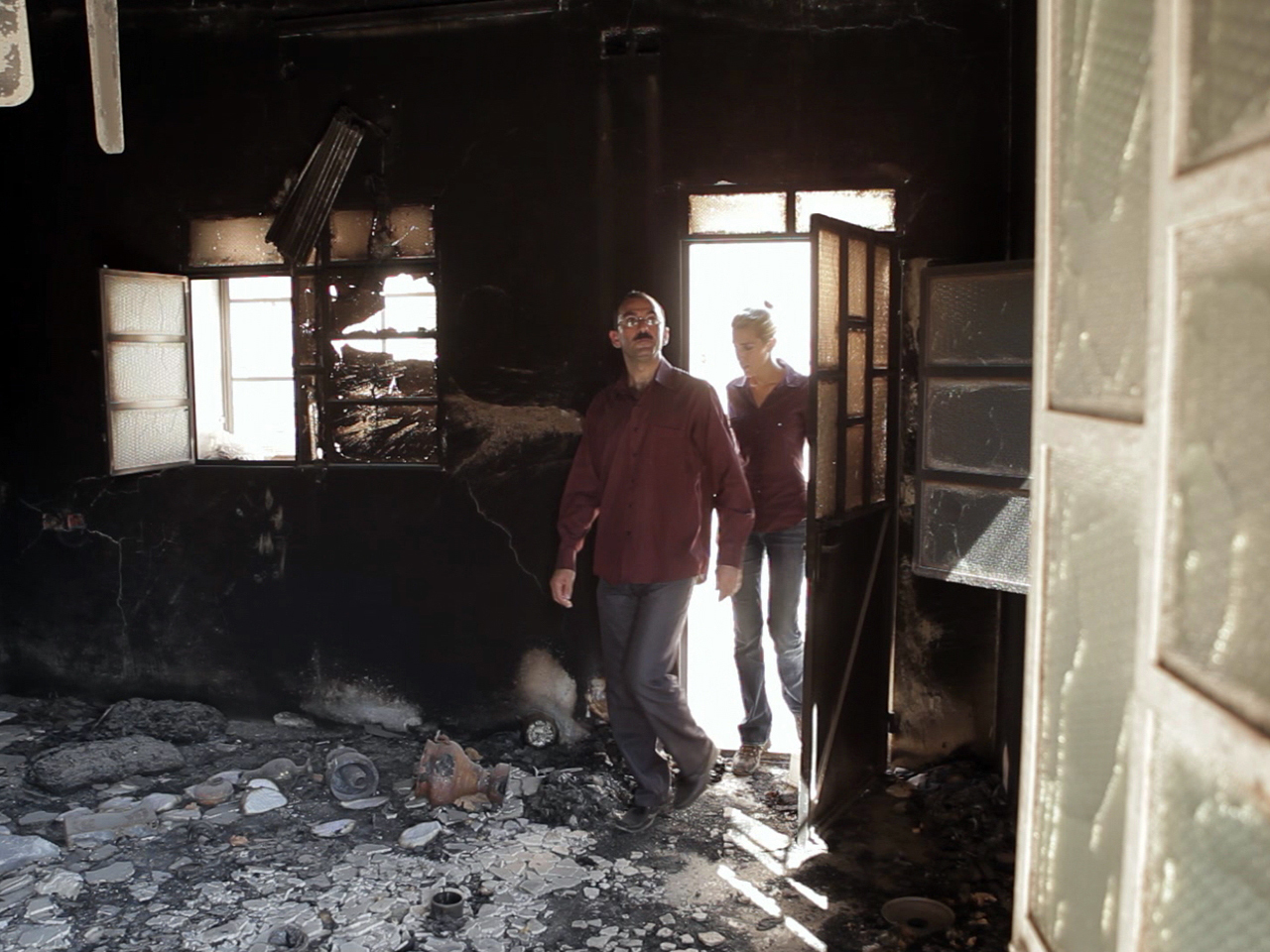 The following script is from "Aleppo" which aired on Oct. 14, 2012. Clarissa Ward is the correspondent. Harry Radliffe and Ben Plesser, producers.

Aleppo is one of the crown jewels of the ancient world, Syria's largest, richest and -- for the past three months -- most dangerous city. The battle that is raging there has reduced entire neighborhoods to smoking piles of rubble.

Across Syria, hundreds of lightly armed, poorly trained rebel groups are fighting to overthrow one of the Middle East's last remaining dictators, Bashar al-Assad, who is using the might of the Syrian military to crush the uprising and hold on to power.

As many as 30,000 Syrians have been killed. More than two million have been forced out of their homes. In Aleppo, tired rebels are being reinforced by foreign fighters many of whom are radical Islamists.

Firsthand accounts from Aleppo are rare so we decided to go to the front lines ourselves. Some of what we saw -- and of what you will see in our story -- is disturbing.

Our trip began in Turkey. The porous border between Syria and Turkey has become increasingly volatile. After sneaking across, we drove for hours through rebel-held territory to reach the city and meet up with its top rebel commander.

His name is Colonel Abdul Jabbar al-Oqaidi and he's the commander of rebel forces, the so-called Free Syrian Army, in Aleppo. We met him in a neighborhood he claimed was under his control.

Clarissa Ward: And this is the liberated area of Aleppo?

Yes, he told us, 70 percent of Aleppo has been freed already. Colonel al-Oqaidi joined the rebels six months ago after defecting from the Syrian army. He walked us through one of the city's few functioning markets, anxious to show us that normal life is still possible here.

But the moment was short-lived. Shells were landing closer and closer.

So we moved, driving through the narrow streets to the heart of this ancient city, large parts of which have been reduced to an apocalyptic wasteland.

We stopped because the colonel wanted to inspect his fighters on the front lines. But as soon as they spotted us, government snipers opened fire.

Night was falling so we moved to an area that we thought was more secure. It's bombardment like that, that has left Aleppo a virtual ghost town. Most civilians here have left. The only people who are really still left, still in the streets, are fighters and those who are too poor to leave.

Once again we had to jump into our cars and drive away. Later that night, we sat down with the colonel to discuss the day's events.

Clarissa Ward: I have to be honest with you. When we were walking through, I was quite terrified at points. There was a steady stream of artillery, there was sporadic gunfire. This did not feel like a liberated city, or even a liberated portion of the city.

Al-Oqaidi (translator): Yes. We control the land, but the skies above are in the government's hands. The regime has planes, artillery, and tanks.

All of which have been pounding the city relentlessly. When rebels brought the fight here in July, they hoped it would deliver a death blow to the regime. Instead they got bogged down in a bitter urban battle.

Al-Oqaidi: I get angry when I see civilians killed on the street and no one in the world is helping the Syrian people.

Colonel al-Oqaidi says he could have won this battle weeks ago if the West had provided him with heavier weapons, and especially anti-aircraft weapons.

Al-Oqaidi: The Syrian people will never forgive the international community for failing to stop Assad regime.

We spent the rest of the night listening to the terrifying sounds of jets swooping down and dropping their deadly payload. In the morning, we set out to inspect the damage.

Clarissa Ward: This morning at 6:30, we, like everybody else in this neighborhood, were awoken by a deafening blast. A jet had dropped a bomb and now in the light of day we can actually see where it fell on this house, flattening it, killing the owner and also injuring his wife and children.

Residents in the area told us they believed that the intended target was a nearby hospital. In Syria now, no place is safe; mosques, schools, even the lines outside the few bakeries still producing bread regularly attract fire.

It's a scorched earth policy. Literally. After President Assad's forces stormed through this neighborhood, English teacher and opposition activist Saleh Hawa came home to find this.

Saleh Hawa: They burnt it in a way to not to allow anybody to live here anymore. They meant it. It was not just by chance. They wanted to...they want to kill us. Just shortly. Either we accept Bashar al-Assad to be our president or we have to be killed. His soldiers wrote on every single wall in our city, 'Either you accept Bashar al-Assad or we burn the whole country,' and that's what they are doing now. They are burning the whole country.

In the towns and villages around Aleppo, the streets are eerily quiet.

[Dr. Maher Nana: The town is totally different. People have deserted...whoever left here they were living under bombardment...]

Maher Nana: Kids cannot sleep at night. People...they're, they're just expecting to get hit at anytime.

He runs a family practice in Delray Beach, Fla., but now spends much of his time traveling in and out of Syria on behalf of an organization called the Syrian Support Group. Its goal is to transform the Free Syrian Army from a disorganized grouping of militias, into a coherent force. But it also works closely with the U.S. government to identify credible rebel officers, like Colonel al-Oqaidi, and report on their progress.

Clarissa Ward: Making vows is easy. Sticking to them is much harder. How can you be sure that these men are going to stick to those vows?

To check on them Dr. Nana makes frequent and often dangerous trips into Syria.

Clarissa Ward: You have a good life in Florida. You have a wife. You have two beautiful children. Why do you make those trips?

But his group has managed to do something significant. It secured special permission, a license, from the Treasury Department to raise money in the U.S. and send it to commanders in Syria.

Clarissa Ward: So they can buy weapons with the money?

Clarissa Ward: And the U.S. administration understands that and is at peace with that?

Clarissa Ward: But it is an extremely ambitious project. I mean, you're essentially a small group of Syrian Americans with limited funds who are trying to fund and organize an army.

But the optimism of revolution is giving way to the bitterness of insurgency. And as the fighting drags on, Syrians, disappointed with a West that they expected to come to their rescue, are turning elsewhere.

Maher Nana: When you fight for your life, you ask for help. And when good people don't help you, you're going to ask for help from anybody else.

Increasingly, it is Islamists from across the region who are offering their help. This video was posted online by Libyan militants who say they are training Syrian fighters, passing on their ruthless tactics and religious zeal. Western governments are reluctant to send the rebels heavier, longer-range weapons, for fear that they will end up in the wrong hands.

Ahmed al-Abaid is the kind of rebel leader they're worried about. He leads a group of several hundred jihadis, or holy warriors. These young and impressionable village boys, his latest recruits, will go into battle under the black flag of radical Islam.

After weeks of negotiations, we were allowed to travel to Azaz, a town north of Aleppo, to meet al-Abaid face-to-face. He said he was fighting for a free Syria, but for him that means a country governed under the ancient Muslim legal code of Sharia.

Clarissa Ward: You would like to see Sharia law implemented as the law of the land.

Clarissa Ward: That is therefore saying that you wish to create an Islamic state in Syria.

Al-Abaid: And what's wrong with that? The world has misguided ideas about Islam. Muslims have never been the aggressors against anyone.

We had heard that, under al-Abaid, captured government soldiers were being tried by self-appointed Sharia judges.

Clarissa Ward: You have a judicial system here?

Al-Abaid: Yes, we got a judicial system, and everybody is happy with it. Sometimes, when we release the prisoners, and they refuse to leave.

Clarissa Ward: Would it be possible for us to meet with some of your prisoners?

Al-Abaid: Well, most of them have left. I believe there's one or two who are still there, but it wouldn't be possible for you to meet them.

Al-Abaid's men gave us a collection of videos as a parting gift. Most of them showed his fighters on the front lines in Aleppo. But one stood out. It shows four Syrian soldiers, their military IDs on display, as an off-camera voice says that they were tried and found guilty of "waging war against the people." It caught our attention because we had obtained another video from a separate source, which is very hard to watch. It begins with the same scene but then...

We decided to risk returning to Azaz to confront the jihadi leader who had bragged of how well he treated his prisoners.

Clarissa Ward: When we went back, we looked at some of the video clips that your men had given us. And I wonder if you can take a look at this one and tell me, what is going on in this clip?

Clarissa Ward: Can you tell me what that video is showing?

Clarissa Ward: And what sentence were they given?

Al-Abaid: That's something that the judges know more about than I do

Clarissa Ward: Because we have another version of the video. It's a longer version and it ends quite differently.

Clarissa Ward: You know about these executions?

Al-Abaid: No, I was not aware.

Still, he defended the decision to execute the soldiers, calling it "an eye for an eye," but when we pointed out that it was his men who were responsible all he could say was...