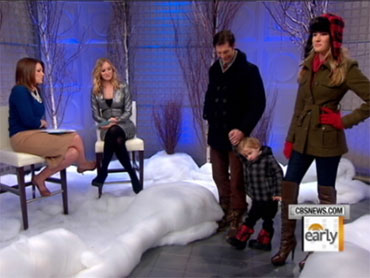 Tens of thousands of protesters clad in white streamed through the cobbled streets of Scotland's medieval capital Saturday, demanding that the leaders of the world's richest nations act to better the lives of the poorest.

The "Make Poverty History" marchers said the world must no longer tolerate the extreme poverty that blights the lives of millions in Africa and elsewhere. They planned to form a huge human bracelet around Edinburgh later Saturday as they kick off a week of anti-poverty activism.

The marchers want to send a peaceful but powerful message to politicians gathering for the summit of the G-8 group of rich countries at the nearby Gleneagles resort next week.

The demonstrators urged the G-8 leaders to heed Prime Minister Tony Blair's call to erase Africa's debt, pony up for a massive boost in aid and eliminate trade barriers that make it difficult for impoverished nations to sell their goods overseas.

The march coincided with the Live 8 global music marathon to raise awareness of African poverty. Hundreds of musicians were taking to 10 stages around the world Saturday in cities ranging from Johannesburg to Philadelphia, Berlin to Barrie, Canada.

There are shows in all the G-8 countries: the United States, Britain, France, Germany, Italy, Canada, Japan and Russia, as well as in South Africa, where former President Nelson Mandela was expected to address the crowd. A tenth, all-African show was being staged in southwest England.

The atmosphere in Edinburgh was festive, with an African percussion band playing and some demonstrators wearing masks depicting the faces of G-8 leaders including President Bush, Blair and Russian President Vladimir Putin.

However, about 150 anarchists and anti-globalization protesters dressed in black joined the march, many wearing hoods or covering their faces with bandanas. Some had T-shirts bearing the anarchist symbol of the letter "A" inside a circle; one had a placard that said "No nation, no order."

Some pushed over a barricade and charged a line of police before running away down side streets. One activist threw a bottle, while another tipped over a refuse bin. Police described the incident as a minor disturbance and said no one had been arrested.

Organizers had expected more than 100,000 people but police said they had no immediate crowd estimate.

Britain's two main Roman Catholic leaders headed the procession and Cardinal Keith O'Brien, the leader of Scotland's Catholics, read a message from the Vatican. He said Pope Benedict XVI urged those in rich countries to bear the burden of reducing debt for the poor and call on their leaders to fight poverty.

"His Holiness prays for the participants in the rally and for the world leaders soon to gather at Gleneagles, that they may all play their part in ensuring a more just distribution of the world's good," said the message from Vatican Secretary of State Cardinal Angelo Sodano. He conveyed the pope's "ardent hope that the scourge of global poverty may one day be consigned to history."

The marchers jammed streets in Edinburgh's ancient center and its modern commercial districts. Some banged drums or blew whistles as they walked. Police were out in force but had little to do.

At a rally before the march began, tens of thousands turned the Meadows, Edinburgh's main park, into a sea of white, the anti-poverty movement's trademark color.

Some of the Edinburgh marchers carried banners bearing religious imagery such as crosses while others espoused a socialist viewpoint.

Thandiwe Letsoalo, who traveled from Soweto, South Africa, for the march, lost two daughters to HIV-related illnesses and is caring for eight grandchildren and two unemployed sons on a small pension.

"The G-8 leaders have to increase aid but ensure that the governments they are giving aid to are not corrupt so that the money can trickle down to the people," she warned.