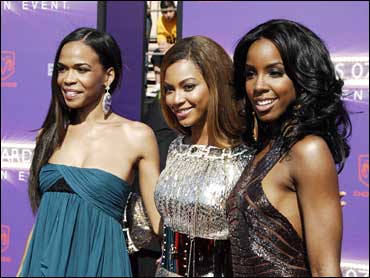 Although the BET Awards doled out awards to some of entertainment's most celebrated performers Tuesday night, from Beyoncé to Jennifer Hudson, it was the show's tributes to living legends and recently departed giants that evoked the most emotion.

Lifetime achievement honoree Diana Ross urged younger performers to "keep it classy" and refrain from foul behavior. A tearful Patti LaBelle joined an all-star tribute to R&B crooner Gerald Levert, who died last year. And fists pumped in the air as hip-hop group Public Enemy honored the late Godfather of Soul, James Brown, with a stirring rendition of one of his landmark hits, "Say It Loud (I'm Black and I'm Proud)."

"James Brown gets credit for laying the musical foundations of hip hop, but he set some attitudes for the culture as well. He was pro-black, pro-strong," said civil rights activist and longtime Brown friend, the Rev. Al Sharpton. "It's time for us to pick up the legacy and teach another generation to wear their shoulders back and hold their heads high and be able to say it loud, I'm black and I'm proud."

With that, Flavor Flav and Chuck D took the stage, launching into a medley of hits, including "Fight the Power" and "911 is a Joke." They were joined by veteran bassist Bootsy Collins, wearing his trademark shades, for a cover of Brown's "Say it Loud (I'm Black and I'm Proud)." Brown died on Christmas.

The three-hour ceremony was laden with more performances than awards; some trophies were given off-camera. Beyoncé, who led all nominees with six, won two awards, as did her "Dreamgirls" co-star Jennifer Hudson, who snagged a best new artist and best actress award.

"I can't believe I'm still winning awards!" she said as she won her first of the night.

Hudson helped kick off the show with a union of "Dreamgirls" past and present: a stirring duet with Jennifer Holliday.

Though Hudson won a best supporting actress Academy Award this year for her role as Effie in the movie "Dreamgirls," it was Holliday who originated the role on Broadway almost three decades ago and made the song "And I Am Telling You I'm Not Going" one of the most memorable performances in music.

The two Jennifers united to sing what is now both women's signature song — particularly noteworthy, given Holliday's complaints about being ignored for her contributions to "Dreamgirls."

Ross was feted with a multi-song tribute. Erykah Badu got it started with her cover of "Love Hangover." Others paying tribute to Ross included fellow Motown legend Stevie Wonder and R&B queen Chaka Khan, and her five children, including actors Tracee Ellis Ross and Evan Ross.

The night's most touching performance was O'Jays singer Eddie Levert's tribute to his late son, singer Gerald Levert, who died in November 2006. The elder Levert was joined by Gladys Knight, LaBelle and Yolanda Adams for a heart-wrenching rendition of "Wind Beneath My Wings," which Gerald Levert often performed.

LaBelle got teary-eyed as she described Gerald Levert as "one of the best voices around."

"His life was embodied with soul music," she said.

Beyoncé captured awards for best female R&B artist and video of the year for "Irreplaceable." She delivered a show-stopping performance of her own with her dance anthem, "Get Me Bodied," appearing on stage in gold robot gear, which she whittled down to sleek gold lame pants and a matching bra top. Fellow Destiny Child member Kelly Rowland appeared moments later to perform her solo hit "Like This" with Eve, and later the Destiny's Child reunion was complete when Beyoncé and Michelle Williams appeared onstage.

Don Cheadle, who won the humanitarian award, was the subject of a tribute that focused on his efforts to raise awareness about genocide in Darfur.

Citing humanitarians such as Martin Luther King Jr., Mother Theresa and Gandhi, the Oscar-nominated star of "Hotel Rwanda" said he didn't feel worthy of the award.

"I started to respectfully decline in deference to those doing it day to day," he said. "As I accept ... I hope one day to be deserving of it."

Other winners included T.I., who was named best hip-hop artist. He not only offered thanks, but apologies after getting involved in a scuffle with members of Ludacris' camp earlier in the week.

"They say it's a fine line between brilliance and insanity," he said, half-joking.

Ludacris won best collaboration for "Runaway Love," his song about wayward girls in trouble, with Mary J. Blige. Though he's known for songs about partying and wild behavior, he got serious as he talked about the impact of "Runaway Love."

That wasn't as evident when 50 Cent took the stage to perform his new hit, "Amusement Park," which was bleeped several times and ended with a shout-out to his sponsor, Vitamin Water.

Perhaps with that performance in mind, Ross, as she accepted her award, implored performers to keep it clean.