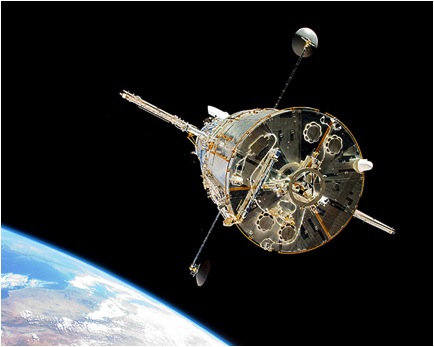 Five years after a fifth and final shuttle servicing mission, the Hubble Space Telescope's instruments are operating in near-flawless fashion and while one of its six stabilizing gyroscopes has failed, project managers are optimistic the observatory will be able to operate through the end of the decade, wrapping up 30 years at the apex of astronomy.

If those forecasts hold up, NASA will be able to use Hubble in concert with its successor, the $8 billion James Webb Space Telescope, giving astronomers a golden opportunity to compare Hubble's visible-light images with Webb's deep infrared views to better understand the structure and evolution of the early universe.

"Hubble's doing great," said John Grunsfeld, NASA's director of space science operations and one of the spacewalkers who helped service Hubble during a final visit in 2009. "We've had one gyro failure, but that's to be expected.

"The real issue for us, which is what's proving very exciting, is though the instruments have now been up for almost five years, we're finding news ways to use them and new ways to correct the effects of being in space," he said. "And so they're becoming even more sensitive than they were when we went up there."

The Space Telescope Science Institute still receives five to six times more applications for observing time that can be honored and Grunsfeld said NASA will continue funding the observatory, at more than $90 million per year, as long as it remains scientifically viable. NASA has spent $7.5 billion on Hubble in real year dollars since the program was approved in 1977, not counting the cost of six dedicated shuttle missions.

"When we get to 2020, if we're down to a single instrument, maybe we only have Wide Field Camera 3 left and we're on the cusp of launching a wide-field survey telescope ... the science community may decide funding isn't worth it and we ought to put it into the next-generation telescope," Grunsfeld said.

"If the over-subscription (rate) drops down to a much lower number, and I don't know where that threshold would be, and there's more pressure on James Webb or a new telescope, then we would put it into a senior review where it competes against those other instruments."

Hubble was launched 24 years ago, on April 24, 1990, aboard the shuttle Discovery. In what became the opening chapter of a space drama rivaling the "Perils of Pauline," engineers discovered its presumably near-perfect 94.5-inch primary mirror suffered from spherical aberration, a condition that prevented it from bringing starlight to a sharp focus.

In a remarkable display of Apollo 13-style ingenuity, engineers precisely mapped the aberration and designed corrective optics that were installed during a December 1993 shuttle servicing mission, the first of five that eventually were launched.

With its razor-sharp vision restored, Hubble quickly became one of the most scientifically productive observatories ever built, chalking up a steady string of major discoveries and sending down spectacular images that now grace everything from scholarly journals to grade school textbooks, T-shirts and posters.

"Its images have become part of our culture in our textbooks, magazines, art and even popular movies and TV programs," Ed Weiler, former Hubble project scientist and Grunsfeld's predecessor at NASA Headquarters, said before the final shuttle visit. "Although we probably never will be able to visit these places or objects, Hubble actually allows our human minds and spirits to travel light years and even billions of light years to the farthest reaches of the cosmos."

More recently, Hubble has been used to search for minor planets beyond Pluto, to look for planets orbiting other suns, to improve the accuracy of astronomical distance measurements and to study gravitational lenses created by galaxy clusters that magnify the light from even more distant, and ancient, galaxies that formed shortly after the big bang.

The secret to Hubble success was NASA's ability to launch shuttle servicing missions to replace outdated or malfunctioning components, to repair systems that could not be replaced and to install new, state-of-the-art instruments to keep the observatory at the forefront of astronomy.

"The spherical aberration story is one for the history books," James Jeletic, deputy project manager of Hubble operations at NASA's Goddard Space Flight Center, told CBS News. "And then the astronauts and the whole idea of the servicing, which allowed us to put new instruments on board and things of that nature, that has worked just absolutely spectacularly."

Four years after Hubble was equipped with corrective optics, astronauts on a second servicing mission installed two new instruments -- the Space Telescope Imaging Spectrograph and the Near Infrared Camera and Multi-Object Spectrometer, or NICMOS -- replaced a fine guidance sensor, a gyroscope and installed a solid-state data recorder.

During Servicing Mission 3A, launched in December 1999, spacewalking astronauts installed a new flight computer, a second solid-state data recorder, another fine guidance sensor and a full set of six gyroscopes. During Servicing Mission 3B, launched in March 2002, another shuttle crew installed two new solar arrays, the Advanced Camera for Surveys, an experimental cooling system for NICMOS and a replacement power control unit.

Then, 11 months later, the shuttle Columbia was destroyed during re-entry by a breach in its wing leading edge heat shield. Plans for a fifth shuttle visit, Servicing Mission 4, were put on hold and eventually cancelled by then-NASA Administrator Sean O'Keefe.

He made the decision in large part because Hubble and the International Space Station were in different orbits and a Hubble repair crew could not reach safe haven aboard the station if their shuttle suffered a Columbia-class problem.

The repair crew also installed an upgraded fine guidance sensor, new insulation blankets and a grapple fixture that will permit attachment of a rocket motor at some point down the road to enable a controlled re-entry when Hubble's orbit decays to the point of no return.

Grunsfeld and his crewmates also repaired two science instruments, the Space Telescope Imaging Spectrograph, which suffered a power supply failure in 2004, and the Advanced Camera for Surveys, which malfunctioned in 2007.

Jeletic said other than a single gyro failure, the observatory is operating in near-flawless fashion five years after the final shuttle crew departed.

"Batteries are fine, solar arrays are fine, all the communications equipment is fine, we don't see any glitches with the computers, the instruments are all fine," he said. "In fact, an interesting statistic, the Advanced Camera for Surveys, which was repaired by the astronauts during the last servicing mission, that's actually now run longer on the repair than it did originally for the Wide Field Camera part of it."

The ACS, like the repaired Space Telescope Imaging Spectrograph, no longer has any internal redundancy.

"It's amazing. It truly is," Jeletic said. "Given all the things that can fail, a lot of people were hoping for one or two years of continued work with it. Now we've gotten over five."

"It shares the load in spectroscopy with COS (Cosmic Origins Spectrograph)," Jeletic said. "COS gets a little bit more work, but STIS gets its fair share."

The only other instrument issues have been transitory space radiation-triggered single-event upsets "where a particle came down and hit some part of the computer circuitry and caused a bit to flip."

"You reset the electronics and you're back in business," Jeletic said. "So no damage or anything like that, and we were back up and running in less than 30 hours. So that's a no brainer. We get those on different parts of the spacecraft, that's not unusual."

Neither is shrinkage caused by a phenomenon known as desorption, in which atoms and molecules making up a spacecraft's components can slowly migrate to the surrounding environment. As a result, the telescope's structure has actually shrunk ever so slightly over the years. One of Hubble's Fine Guidance Sensors, while still operating normally, is suffering from a slightly reduced aperture.

"We see that, for example, with the optical telescope assembly, which is the structure that holds the mirrors," Jeletic said. "Every so often, every two or three years, we'll actually do a secondary mirror move to pull it back into focus. Similarly, with the Fine Guidance Sensors, there's still some of that going on. Nothing that we can't manage right now, just watching that trend."

The only other issue of any significance is the March 7 loss of a gyroscope, apparently due to the failure of a hair-thin flex wire that carried current to the unit. The gyro had operated for more than 50,000 hours when it failed, a near record.

Three of the six gyros installed in 2009, including the one that in March, used an older style flex wire design while three incorporated silver-coated "enhanced" flex wires to improve durability. In an unrelated event, another gyro was put in powered-down reserve because of "noise" in its circuitry. Engineers have since uploaded software to compensate and the gyro is considered fully operational.

In any case, Hubble normally operates with just three gyroscopes with the others in reserve, powered off but ready for use if needed. The gyro with the noise issue is one of the two currently held in reserve.

Jeletic said the loss of one gyro poses no issues for Hubble, especially given that engineers have developed software that would permit science operations to continue with two gyros or even with one.

"They're all ready to roll," Jeletic said of the software packages. "The two-gyro [software] was the first one, we actually used that before the previous servicing mission and then the one gyro we've implemented and tested as well. That's ready to go."

While engineers could improve Hubble's life expectancy by putting more gyros in reserve now, three are required to maximize the observatory's science return.

"We want to optimize that situation and get as much science back as we can while all the instruments are truly working," Jeletic said. "So we're going to stay in three-gyro mode. If that changes, if all the sudden we've lost two instruments or something, we may take another look at that. Or, if we end up losing gyros over time and we're down to two gyros, then we will automatically jump to the one-gyro mode and put one in reserve. That's the game plan."

Operating Hubble much beyond 2020 will be technically and politically problematic. And no matter what happens, the telescope will continue slowly but surely losing altitude because of atmospheric drag, a phenomenon that depends in large part on the 11-year solar cycle and how much the sun causes the atmosphere to heat up and expand.

Based on an average solar cycle, the latest projections show atmospheric friction will cause Hubble to fall back to Earth around 2036. In a worst-case scenario, re-entry could come as early as 2027.

NASA still plans to attach a small rocket motor to the base of the telescope at some point to make sure it can be guided to a safe entry, one that will ensure surviving debris falls into the ocean.

But planning for Hubble's re-entry is many years away. In the near term, as a recent senior-level NASA management review concluded, "Hubble is operating at or near the highest level of performance and scientific productivity in its history."