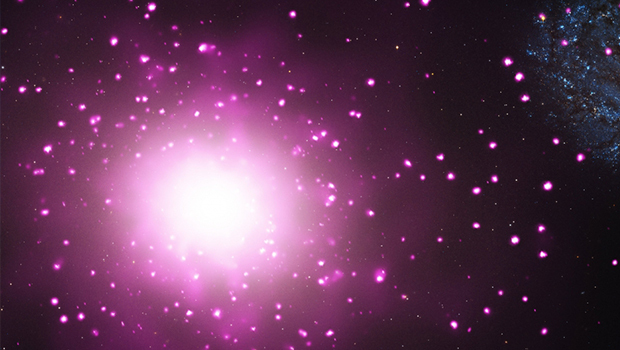 NASA's Chandra Observatory recently captured images of an incredibly dense galaxy about 54 million light years from Earth. Astronomers say it is the most crowded galaxy in our part of the universe. It was first discovered by the Hubble Space Telescope.

Known as M60-UCD1, the ultra-compact dwarf galaxy is estimated to be 10 billion years old.

The brilliant images show a galaxy where more than half of the mass is within a radius of just 80 light years. The stars are about 25 times closer together than those in the Milky Way.

"Traveling from one star to another would be a lot easier in M60-UCD1 than it is in our galaxy, but it would still take hundreds of years using present technology," Jay Strader of Michigan State University said in a press release.

"The abundance of heavy elements in this galaxy makes it a fertile environment for planets and, potentially, for life to form," added Anil Seth of the University of Utah.

Strader and Seth led the discovery team. Their findings are published Sept. 20 in The Astrophysical Journal Letters.

The images also show a large x-ray source in the center of M60-UCD1, indicating a potential black hole. The hole is estimated to be about 10 million times the mass of our sun.

The authors also theorized that this could be the remnants of a once-larger galaxy. It is estimated to have been 50 to 200 times its current size.

"We think nearly all of the stars have been pulled away from the exterior of what once was a much bigger galaxy," said co-author Duncan Forbes of Swinburne University in Australia. "This leaves behind just the very dense nucleus of the former galaxy, and an overly massive black hole."