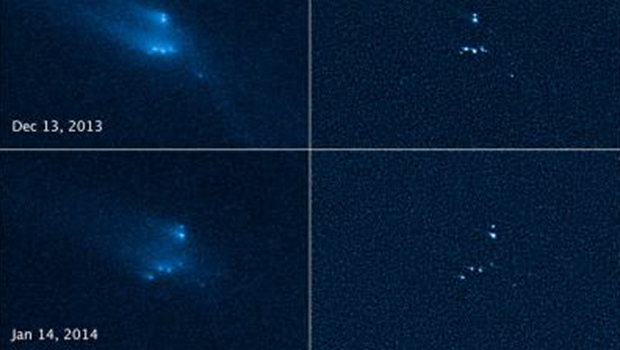 "This is a rock, and seeing it fall apart before our eyes is pretty amazing," David Jewitt of the University of California at Los Angeles, who led the astronomical forensics investigation, said in a press release.
When astronomers first spotted the asteroid on Sept. 15, 2013, it appeared as an "unusual, fuzzy-looking object." Two weeks later, under closer observation, it appeared to be three bodies moving together in an envelope of dust that was nearly the diameter of Earth.
That revelation encouraged the astronomers to look even closer.
"The Keck Observatory showed us this thing was worth looking at with Hubble," Jewitt said. "With its superior resolution, space telescope observations soon showed there were really 10 embedded objects, each with comet-like dust tails. The four largest rocky fragments are up to 400 yards in diameter, about four times the length of a football field."
Hubble observations showed the fragments drifting away from each other at about one mile per hour. This asteroid, P/2013 R3, started coming apart last year and continues to break into smaller pieces.
Scientists have seen this happen when an asteroid nears the sun, but never in the asteroid belt. They are not entirely certain what is causing P/2013 R3 to break up, but currently think it is due to a subtle effect of sunlight.
Sunlight causes asteroids to start rotating faster. Eventually, the pieces of the asteroid give in to centrifugal force and start breaking apart.
They added that most of this asteroid's debris, which weigh about 200,000 tons, will likely plunge into the sun at some point, but a small fraction of them will light up our skies in a meteor shower.