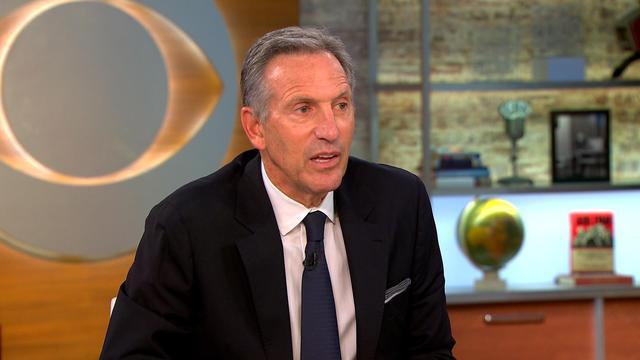 Howard Schultz bought Starbucks in 1987 and built it into a global powerhouse in the coffee business. From the beginning, he put a strong emphasis on the company's commitment to social issues and strengthening communities. Starbucks is launching the second season of its original series, "Upstanders," which features people who have taken action to make their communities better.

The first episode focuses on a chef who risked his career to open a restaurant staffed almost exclusively by former juvenile detention inmates.

Schultz, the company's executive chairman, joined "CBS This Morning" to discuss why he believes the political divisiveness and tone in Washington does not reflect the kindness and compassion of most Americans.

"The goal is there's a better side to America than what's coming out of Washington. Those stories are not being told," Schultz said. "I think the sense of humanity, compassion, empathy that's going on in every city and every town around the country has to be told and we had so many stories. We picked 11, we could have had a thousand and I think people are longing for truth, authenticity."

That "false narrative" from U.S. leaders, according to Schultz, is that America is politically divided. Schultz said they met a woman in Missoula, Montana, who, with no training and against the mentality about immigration in her state, brought refugees in from Syria.

"The divisiveness, the polarization and dysfunction, the lack of leadership, it's not America," he said. "It's going on in Washington, but the divisiveness is not how people act every single day. You know, we have so many stories that we've shown and there are differences of opinion on a number of issues, but people come together."

"Well, I'm not running for president, but the narrative that I'd like to try and elevate is the fact that our society needs to be reminded that Washington does not define our behavior," he said.

While there have been many stories of humanity and compassion in the aftermath of recent hurricanes, Schultz believes catastrophe isn't the reason they're happening – it's human kindness.

"People coming together in Houston is wonderful, but that's happening not because of a catastrophe, it's happening because of human kindness and that's going on every day in America," he said. "We don't need a hurricane to demonstrate the values and humanity of the country."

But Schultz isn't placing particular blame on President Trump for the tone in Washington.

"No, I think I'm putting it – I mean listen, we've had polarization and dysfunction in Washington for a number of years," he said. "Unfortunately it's gotten to a boiling point now where it's almost impossible to wake up every day because you've got a different episodic situation and it does place a cloud over our society and I want to offset that by saying there's something else going on – a better America."

Check out the Upstanders Challenge here.