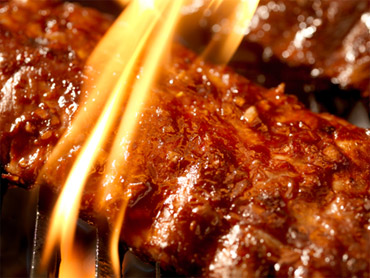 My mother was very proud of the fact that none of her four children ever became sick from her cooking. While it's true she may have erred on the side of overcooking the turkey, being spared food poisoning is yet another in the long list of gifts from my mom.

Every year, about 76 million Americans develop illness from food, more than 325,000 are hospitalized, and about 5,000 die. The most common cause is contamination with bacteria such as Salmonella, Campylobacter, Shigella, and E. coli - though other organisms such as viruses and protozoa can also be culprits. With the July 4th weekend about to begin, I thought it would be a good time to review some basic tips about food safety.

First, here's a short microbiology lesson to help answer a very common question: what actually causes the gastrointestinal upset caused by contaminated food? If you get sick within 12 hours of eating the contaminated food, it's probably from a bacterial-made toxin rather than directly from the bacteria themselves. That's because there are three basic ways that food contaminated with bacteria can make you sick:

1) The bugs (such as Staph aureus) make a toxin that is eaten with the food. This usually occurs when food is left at room temperature long enough for bacteria to produce the toxin. This causes relatively rapid onset (within 12 hours though this can vary) of symptoms such as nausea, vomiting, and abdominal pain.

2) The bugs (such as E. coli, a common cause of traveler's diarrhea) make a toxin after being eaten. It takes longer (usually at least 24 hours or so) for symptoms such as diarrhea to develop because it takes time for the bacteria to multiply and produce the toxin.

3) The bugs (such as Salmonella, Shigella, and Campylobacter) cause illness by damaging or invading the lining of the intestinal tract themselves. As with #2, it takes time for the bugs to multiply and make you sick. Because there is often severe damage and inflammation (colitis) in the lining of the colon, patients can develop bloody diarrhea. This is the form of illness that people commonly refer to as "dysentery."

Antibiotics kill bacteria but don't affect the toxin. That's why if you develop a bellyache and vomiting within a few hours of eating a sandwich that didn't taste right, your doctor will probably suggest supportive measures such as hydration and rest rather than an antibiotic. But if you develop severe diarrhea and fever a few days after that same sandwich, your symptoms may be directly from the bacteria or from toxin that the bacteria are still producing and so you may benefit from antibiotics.

How can you prevent foodborne illness? The most fundamental concept is that bacteria and other organisms want to eat the food at least as much as you do. They flourish at room temperature and die when heated up enough. The key word is "enough." You MUST know how to properly cook meat, fish, and poultry (for specifics, see the below link from United States Department of Agriculture). Bacteria linger on surfaces and can jump from the cutting board where you've just sliced chicken to the salad that you then chop up on that very same surface. They can grow when they're sitting in your shopping cart (buy meat just before checking out!). They can multiply when you leave food out - whether it's leftovers or the potato salad that starts out in the back of your hot car and then sits outside all afternoon.

Very informative and helpful fact sheets about food safety are available from the USDA. I highly recommend you check this out.

For this week's CBS Doc Dot Com, soul food chef Charles Gabriel gives me a tour of his kitchen at New York City restaurant "Rack and Soul" and some tips on barbecue and food safety. His mother started him cooking in his North Carolina home at the age of nine and he's been cooking ever since. He's been making barbecue for almost half a century and is the only person alive to know his secret barbecue rub formula. I did succeed in getting him to reveal a few ingredients: paprika, salt and pepper. Click below to watch: