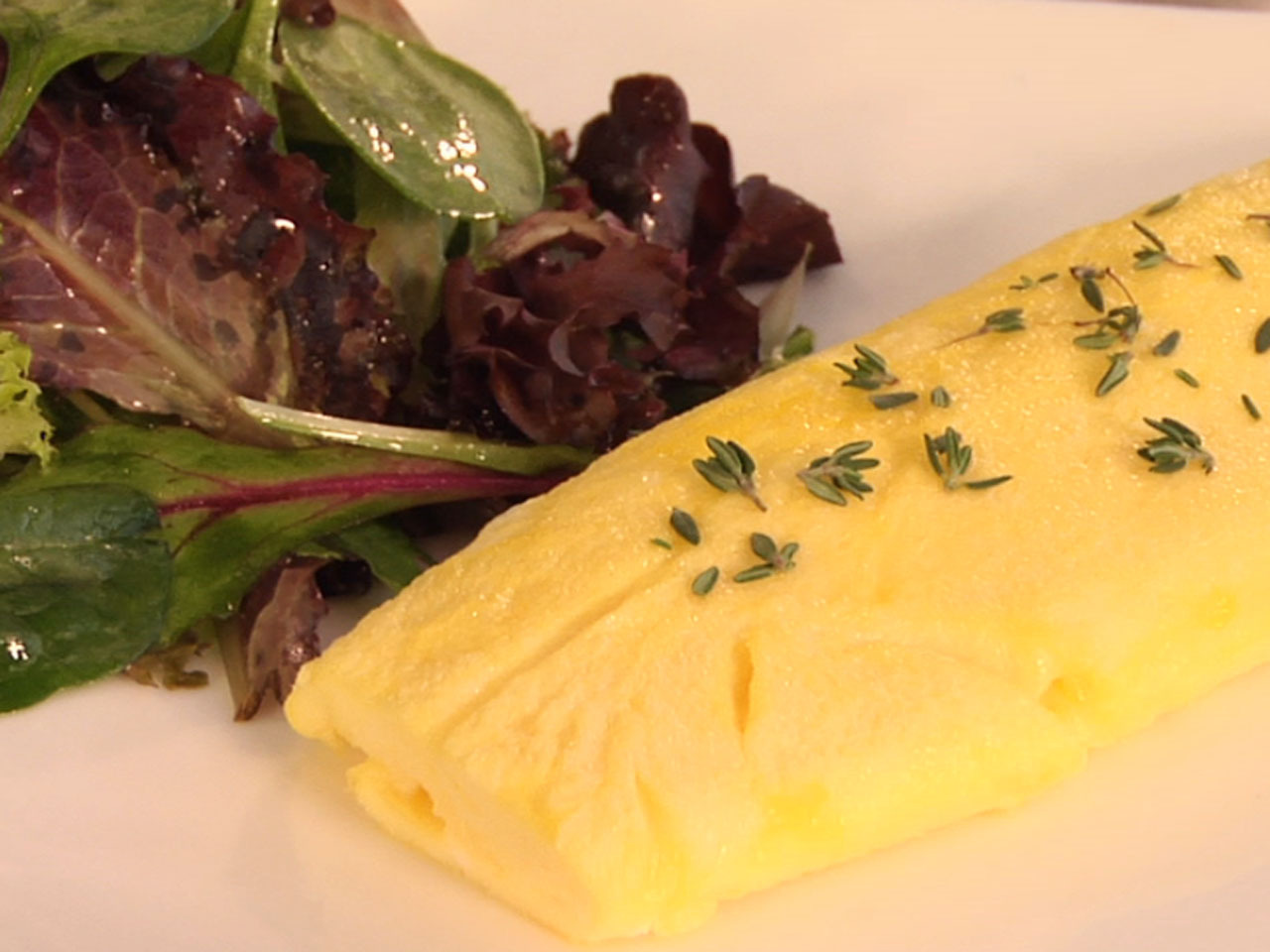 (CBS News) Ever hear the saying: "The test of a true chef is cooking eggs properly?"

Eggs? Really? I've never understood that. How can something so simple be the measure of someone's cooking ability?

Well, after "egg day" in culinary school, I totally get it.

Deceivingly simple, these little suckers can turn on you fast. Before you know it, you've messed up your recipe and have to start all over. Egg day was a reality check, for sure! Making perfect eggs isn't easy at all, and they require a whole lot of practice to get them just right. This rings particularly true for omelets.

Video: The secret to restaurant-style omelets

There is nothing better than a really good omelet. Just the thought brings me to a happy place...a relaxing brunch on a lazy Sunday at my favorite neighborhood joint with my girlfriends. That being said, there is also nothing worse, or more disappointing, than a bad omelet.

That's why I was determined to master the omelet technique we learned in class.

Of course, my favorite type of omelet is particularly fussy: a traditional French rolled omelet. It has no color - meaning no hint of brown - no wrinkles and is a little runny on the inside. For the record, you'll never find me sending back an omelet for wrinkles. If it tastes and looks good, and this omelet certainly does, I'm happy.

To learn how to cook a traditional rolled omelet, watch the video above.

For a rolled omelet:

1. Heat a pan over medium heat, add some butter.

2. Once the butter begins to foam, add two whisked eggs to the pan. Stir continuously with a heat-proof spatula over low heat. When the eggs are lightly set, stop stirring. The point at which the stirring stops is key to having a smooth, even omelet. If a runny omelet is desired, stop the stirring earlier.

4. Roll the omelet onto a warm plate seam side down.

For a flat omelet:

1. Heat a pan over medium heat, add some butter.

2. When the foam subsides, add two whisked eggs to the pan. Do not stir immediately. Scramble the eggs lightly. Tap the bottom of the pan against the stovetop to help spread the eggs evenly over the bottom.

3. When the omelet is lightly colored, flip it and let it cook on the other side until lightly browned. OR: Before you flip, put the oven in a preheated 350F oven for a few minutes, then flip. This will help the top cook a bit before you turn it over. The omelet should remain soft, but not runny, in the center.

Try out a filling we made in class!

1. Gently heat the olive oil in a heavy-bottomed pot and add the onions. Sweat them slowly without coloring. If they start to stick, lower the heat.

2. Lightly crush the garlic clove to peel it and add it to the onions. After about 10 minutes, add the peppers. Season lightly and let the mixture stew for about 25 minutes.

3. Emonder the tomatoes (See video: Peel tomatoes the easy way). Slice them in half horizontally and squeeze out the seeds. Chop them coarsely and add them to the pepper and onion mixture.

4. Continue to stew the Basquaise mixture until all the excess liquid has evaporated, Remove the garlic clove. Taste and adjust the seasoning as desired.

5. For a rolled omelet: Cook omelet until set. Add 1 tablespoon of the mixture to the eggs before you roll out of pan (see above).

For a flat omelet: Add 1 tablespoon of the mixture and a pinch of chopped parsley to two whisked eggs before cooking. Season with salt and pepper (See above on how to cook a flat omelet).

6. Place 1 tablespoon of mixture on top of omelet for garnish.