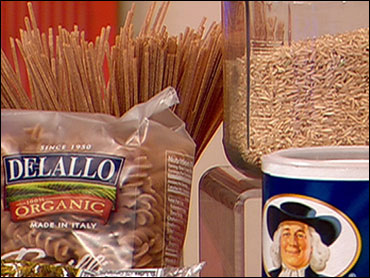 With heart disease the number one killer of men and women in the United States, maintaining a healthy heart is vital.

And according to CBS News medical correspondent Dr. Jennifer Ashton, you don't need to look any further than your own kitchen cupboards for that key to heart health.

She said Wednesday on The Early Show you just have to know what to buy.

Whole grains are the place to start, according to Ashton.

She said whole grains are a better source of fiber than refined grains, because their bran and germ haven't been removed. Millet, buckwheat, oatmeal, and quinoa, she added, are some wonderful grains that are low in fat, high in protein and fiber, and full of vitamins and minerals.

So how does that play out at the grocery store?

Increasing the soluble fiber in your diet, she said, is another easy heart-healthy change. The fiber found in foods like oats, legumes, fruits, and vegetables, Ashton said, can help lower cholesterol.

She suggested starting the day with a bowl of oatmeal, topped with fruit for a nutritious breakfast that will keep you feeling full all morning.

According to some researchers, Ashton told CBS News, it might have even more heart-healthy benefits than regular olive oil.

Another heart-healthy ingredient to stock up on is beans. Ashton said beans provide a multitude of nutrients and antioxidants that can help lower cholesterol, fight infections and diseases and may even lower the risk of certain types of cancer.

Beans, she said, are also a great, low fat food that contain no cholesterol, little fat -- except soybeans which are high in unsaturated fat -- and have a low glycemic index. Ashton said beans are a great choice if you are diabetic or are trying to lose weight.

Not only are beans tasty, Ashton said, but they are also very filling. And because dried beans have a long shelf-life, she said, there's no excuse for not keeping some around in your pantry.

People who eat legumes such as dried beans, peas, and lentils at least four times a week lower their heart disease risk by 22 percent, according to a Tulane University study. Legumes also lower artery-clogging low-density lipoprotein, also known as LDL or "bad" cholesterol, Ashton said, and they don't spur the blood sugar spikes that can take a toll on your heart over time and lead to diabetes.

Tea is also a healthy choice and something which Ashton tells her own patients to drink.

Teas come in many varieties, Ashton said, but the true teas all come from the

Ashton said these teas are full of potent antioxidants that may help prevent certain diseases, such as cardiovascular disease, cancer and impaired immune function. As an ultra low calorie drink -- usually between zero to three calories a cup -- she said, they are also a great substitute for sodas, coffee and energy drinks. As long as you don't load them up with milk and sugar, she said, they are a much healthier alternative.

All varieties of antioxidant-rich tea can help lower LDL, according to Ashton. Oolong tea, the kind typically served in Chinese restaurants, she said, has been found to increase LDL particle size. Ashton said that's beneficial because larger particles are less likely to enter blood vessel walls and form plaque.

Ashton suggested aiming for two cups of tea a day.

Ashton finally recommended nuts, dark chocolate and red wine in moderation, which are all high in antioxidants and good fats.

As for the chocolate, Ashton told Early Show co-anchor Maggie Rodriguez just one dark Hershey's kiss a day is enough to reduce inflammation.

Ashton, born into a family of doctors, knows about healthy eating. Ashton's father is a cardiologist and her husband is a thoracic surgeon.

"We really try hard to practice what we preach," Ashton said.

And what does she preach in her own home?

Ashton said the more color on your plate, the better.

"Try to eat the rainbow," she said. "Eat from the farm, not the factory."

And she said grilling, instead of frying, is a healthier cooking option.