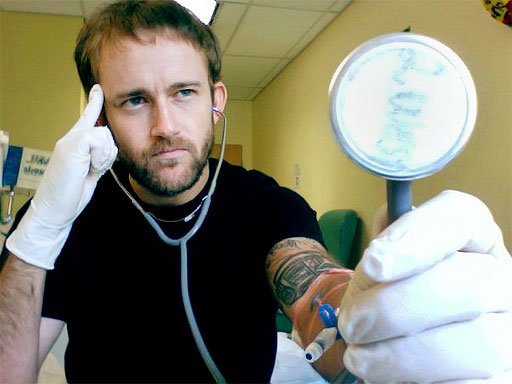 LOS ANGELES (CBS) In December of 2009, 27-year old Christiaan Van Vuuren found himself in the hospital under quarantine and diagnosed with Tuberculosis, a contagious bacterial infection in the lungs.

Thinking he'd only be in isolation for two weeks, the Aussie began distracting himself, goofing around online and playing with video editing software.

That's when he posted his first video on YouTube, "I'm Not Sick, but I'm Sick Sick" and his alias "The Fully Sick Rapper "was born.

Originally created for his friends, the video began to spread online and even landed him a guest spot on the Australian mornings news show, Today.

Vuuren found an escape to hospital life, uploading thirteen more videos over the next six months. His rapping persona quickly grew a following too, accumulating over 1.5 million views on YouTube and 23,000 fans on Facebook.

In his first video since leaving the hospital last week, he shared his story with me including what he's up to next, how he's quitting his day job for YouTube and participating in Ridley Scott's upcoming documentary, "Life in a Day."

And Van Vuuren doesn't want you to sit around like your sick. He tells you how to get involved.