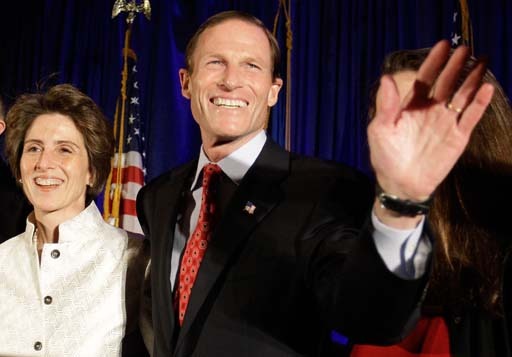 McMahon spent more than 40 million dollars on her campaign, almost all of it her own money. She spent more than any other Senate candidate this year. Yet as other wealthy self funding candidates this year in Connecticut (see Ned Lamont) and in other states (see Meg Whitman and Jeff Greene) found out, money could buy them name recognition but not necessarily love.

Although this is the year of the "outsider", it was Blumenthal's years of experience that probably saved him from the attacks by the McMahon campaign. Moreover, McMahon's lack of political experience contributed to her failure to overtake Blumenthal after closing in on him after trailing by a wide margin early in the campaign.

The long time attorney general was able to withstand an onslaught of tough attacks by Linda McMahon that sought to portray Blumenthal as a career politician who couldn't be trusted. Many of her television advertisements focused on Blumenthal's misstatements that he had served in Vietnam, when he had actually served stateside during Vietnam.

Despite these attacks Blumenthal was still viewed as "honest and trustworthy" by Connecticut voters by a 62-36 percent margin (preliminary CBS News Exit Poll results). A weaker candidate may have been brought down by such attacks but Blumenthal had built up goodwill among Connecticut voters based on his 20 year record as attorney general that he was able to survive these attacks.

While McMahon billed herself as successful businessman who had the skill it took to fix the ailing economy, her specific business experience as head of the WWE turned out to be more of a liability than an asset. By a 40-11 percent margin, Connecticut voters said that this experience made them less likely rather than more likely to vote for her.

Women turned out to be a key to Blumenthal's success. McMahon would have become the first female senator elected. Yet she lost women by 21 points, but won men by 8 points. Another group that was a key to his success was independents. Given the Democrats 34-21 percent registration advantage in Connecticut, a Republican needs to win the independent vote by a significant margin. Blumenthal was able to split the independent vote with McMahon 50-49 percent.

Blumenthal had a very good October, which he really needed. After leading McMahon all year and by as much as 41 points in January McMahon had closed to within 3 points in September in a Quinnipiac University Poll.

McMahon stumbled on a question involving the minimum wage which caused her to be on the defensive for the first time in the campaign.

McMahon initially did not give a clear answer when asked whether she favored lowering the minimum wage at a press conference. Not only did this hurt her but her campaign suffered another blow when she said didn't know what the minimum wage was, despite her business experience that she was running on. Blumenthal opened up a 12 point lead in October and never looked back.

Doug Schwartz Ph.D., is the Director of the Quinnipiac University Poll