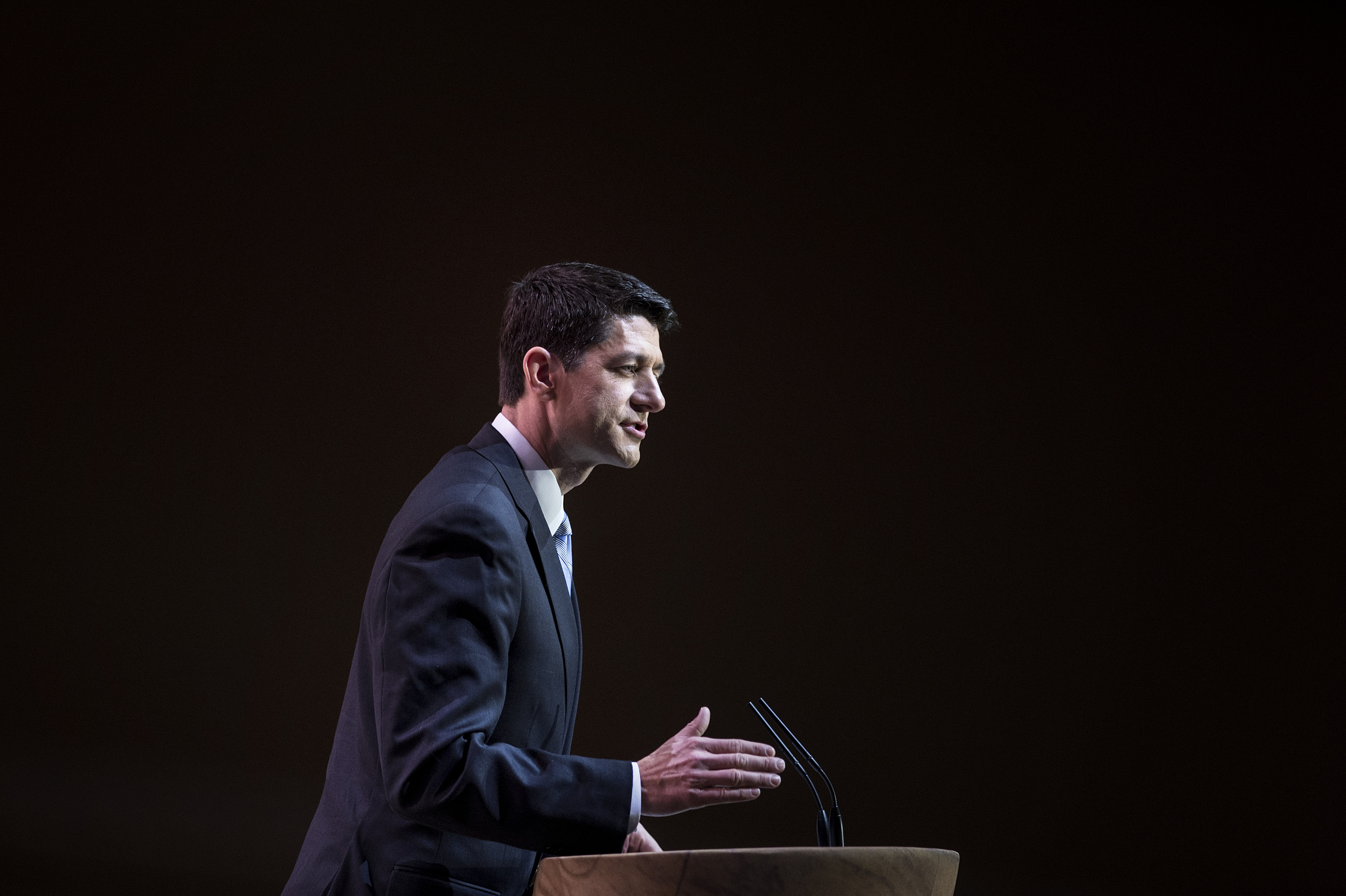 The Republican Party is having a debate about its future. Before it can have the debate, its leaders must agree on just how it should take place. At the Conservative Political Action Conference this week, there emerged several distinct theories about how to approach the GOP split. Play it down: Rep. Paul Ryan said the Republican Party wasn't having a fight about its future direction, but simply a disagreement about tactics. "I don't see this great divide in our party," he said. "I like to think of it as creative tension."

Eject the establishment: Sen. Ted Cruz knows there's a fight and he is taking a side. He said conservatives should stand for principles and not support weak establishment candidates like Bob Dole, Sen. John McCain, and Mitt Romney. "When you don't stand and draw a clear distinction; when you don't stand for principle, Democrats celebrate," he said. That message undermined Ryan's claim that the differences in the party were small, since Cruz was saying that the GOP ticket the budget chairman ran on last year was an example of a catastrophic loss of principles. (McCain has since called on Cruz to apologize to Dole.)

Overrun the establishment: Sen. Mike Lee started his remarks with a well-told Emo Phillips joke about carrying ideological distinctions too far. "We as conservatives have got to be far more engaged in finding converts than discarding heretics," he said. Lee said he was offering a formula to rebuild the movement and the party, and it sounded for a moment like he was offering a softer version of Cruz's pitch. Maybe he was going to create a synthesis between the establishment and grassroots segments of the party. No heretics! Everyone would get to join in! But then the senator told the story of anti-establishment forces in the mid-'70s who rallied around Ronald Reagan. They worked quietly and diligently, said Lee and "those in the establishment never knew what hit them." Lee wasn't offering to convert the establishment; he was promising to ambush them.

Pragmatism: New Jersey Gov. Chris Christie said Republicans needed to make peace to win elections. "I'll remind you of just one simple truth in this democracy: We don't get to govern if we don't win," he said. "So please, let us come out resolved not only to stand for our principles, but let's come out of this conference resolved to win elections again." That may sound like a simple truth, but in the ideological discussion going on in the Republican Party, what Christie is calling for is pragmatism that eschews distinctions because an imperfect coalition is better than the alternative. Save the world: Mike Huckabee wasn't concerned about something as small as politics. If the party didn't unify, said the governor-turned-talk-show-host, the whole bundle would perish. "Conservatives need to focus on how we need to lead America, not just how we will bleed each other in the context of our conservative world. Too much is at stake. The future of our country and the future for our children and our grandchildren is far too important for us to spend our time fighting with each other when the real battle is not even a fight against liberals or a fight against Democrats, it is a fight for the soul and future for this great republic of ours."
View CBS News In
CBS News App Open
Chrome Safari Continue