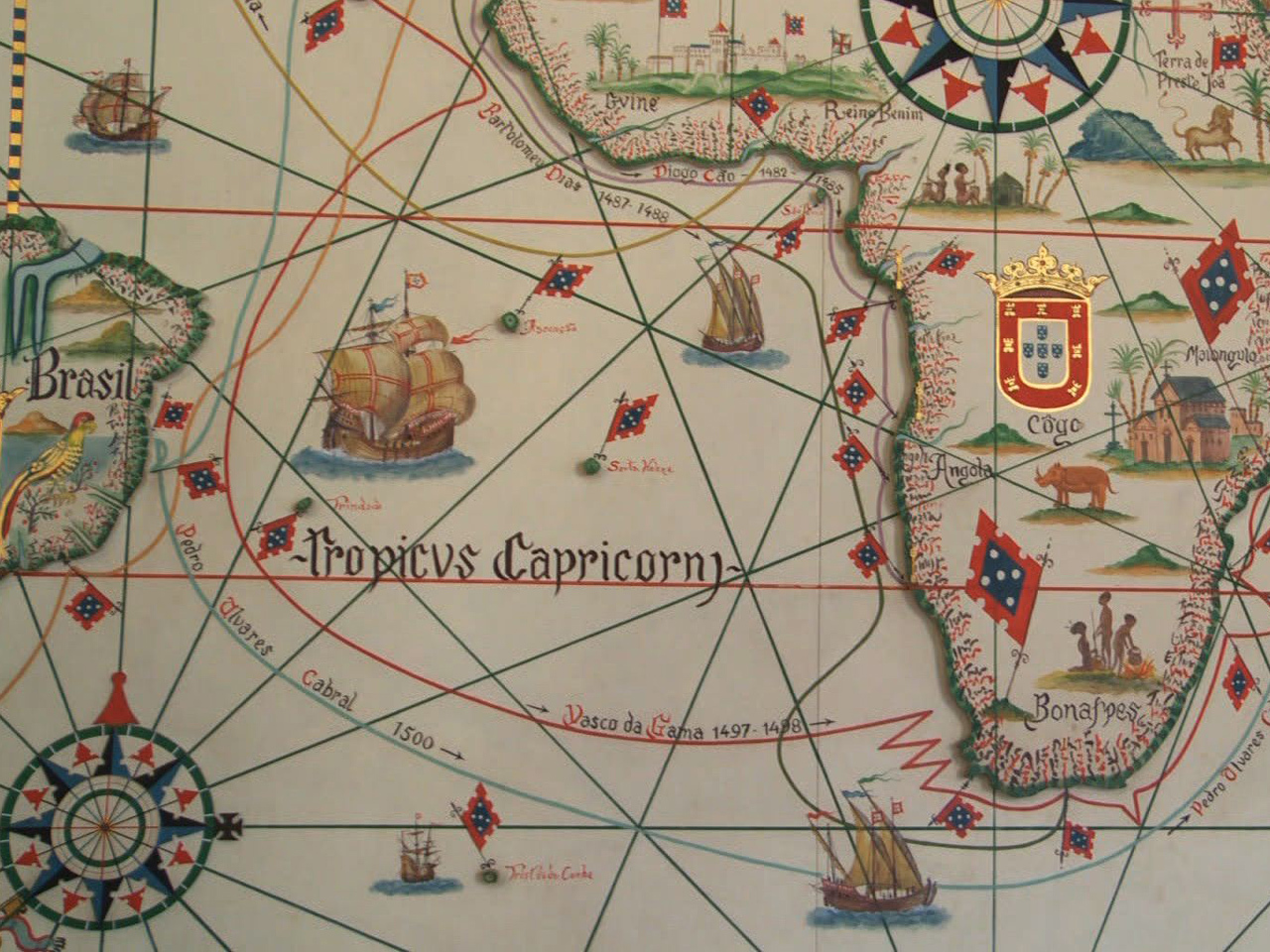 (CBS News) It's Columbus Day weekend, when we remember the sea captain who sailed to the New World in 1492 under the flag of the King and Queen of Spain. It was the AGE OF DISCOVERY . . . something the people of the small, sea-faring country next door to Spain had a lot to do with, as Martha Teichner reports in our Cover Story:

In 2005, Dino Casimiro, a physical education teacher in the town of Nazare, sent American surfer Garrett McNamara a photograph, to lure him to this small fishing village with its large waves.

"The explosion is so big that for us to see the height of the explosion, we have to look up, really up," he said, walking along the side of a 200-foot cliff.

"Does it feel like an explosion, a real explosion?" asked Teichner.

Unbelievable . . . colossal . . . astonishing. Pick your adjective for the monster wave McNamara rode in January just off the Portuguese coast near Nazare.

The Portuguese explorer, Vasco da Gama, came to Nazare, too, to pray before he set out in 1497 -- and again after a successful return from his voyage to find a sea route to India with its rich spice trade. He did what Christopher Columbus tried to do but failed.

Casimiro said that as a country, Portugal turns to the sea: "Our backs are turned to the land, and we are always looking at the sea. We have that kind of impulse to see what is after that."

Even if it's frightening? "Yeah."

Portugal is a country where the sea is and always has been regarded as a living being -- to be stared down, confronted.

A song laments the price paid, but Portugal's greatest heroes -- Vasco da Gama among them -- are its explorers and their patrons during the Age of Discovery.

In Lisbon, Portugal's capital, there's a monument to them: da Gama, Dias, Cabral, Magellan, Prince Henry the Navigator. All those names you memorized in grade school and immediately forgot.

But think about this: In the 1400s and 1500s, their daring and navigational skill made little Portugal -- smaller than the state of Indiana -- the first global sea power.

How it happened is a story about innovation. We'll begin at Prince Henry the Navigator's outpost in Sagres.

"The classical people, Romans, Greeks and other civilizations, they believed this is the point where the world finished," said historian Artur de Jesus of the craggy and windswept southwest corner of Europe. "They give you a picture, very interesting, how the sun sets here . . . they believe the sun dived inside the sea and might boil the sea."

But the Portuguese thought otherwise.

Here, close to where many explorers began their voyages, Prince Henry surrounded himself with scholars, mapmakers, astronomers, as well as navigators, amassing knowledge and intelligence -- the 15th century version of R&D. Like a venture capitalist, he financed expeditions intended to push the boundaries of the known world -- for profit, and to spread Christianity.

The idea, said de Jesus, was to take Christianity to other cultures, to other people, to other lands.

"So Christianity and exploration were always tied together?" asked Teichner.

Prince Henry died at Sagres in 1460. But by that time, Portuguese explorers had inched their way south along the coast of Africa, as far as Sierra Leone.

In 1488, Bartolomeu Dias made it around the Cape of Good Hope. Ten years later, Vasco da Gama reached India. Then, just two years after that, in 1500, Pedro Alvares Cabral discovered Brazil . . . and on it went, each explorer armed with knowledge provided by the last.

At its peak, said Lt. Goncalves Neves, who heads the research department at the Portuguese Maritime Museum in Lisbon, Portugal's reach extended from Rio de Janeiro, Brazil to Tanegashima in Japan.

From Brazil to Japan, with everything in-between.

New technology was key, and this is what it looked like, circa 1440: A ship with triangular sails. It was called the caravel, an ocean-going version of smaller fishing boats. The caravel revolutionized exploration.

The advantage to the type of rigging, said Lt. Neves, was that "you could sail very close to the winds, meaning that you would sail basically where and when you wanted to." In a caravel you weren't restricted to winds that just pushed you along from behind, as square-riggers were.

The Portuguese had the best and most up-to-date navigational tools as well. For example, the mariner's astrolabe, which helped to plot location by measuring the altitude of the sun and stars.

And they had the equivalent of today's proprietary computer software: accurate maps, such as the first cartographic representation of Brazilian territory, drawn in 1502.

By order of King Manuel I, the selling of maps showing Portuguese navigations was prohibited outside of Portugal. "So maps were Portugal's secret weapon?" asked Teichner.

"Maps were power," said Lt. Neves, "because knowledge is power."

Portugal monopolized world commerce, but only as long as it managed to keep its knowledge out of the hands of competitors. Ferdinand Magellan commanded the first expedition that made it around the world. He was Portuguese, sailing for the Spanish -- foretelling the beginning of the end of Portugal's Golden Age.

But it was awfully good while it lasted. King Manuel, who outlawed the sale of maps, began in 1502 building the Jeronimos monastery in Lisbon. With its wonderful Gothic details, it's an extravagant shrine to Portugal's discoveries -- and to its heroes. Vasco da Gama, the embodiment of Portugal's long history of taking on the sea, is buried here.

This summer, the Portuguese navy honored that spirit by giving its Vasco da Gama Award to surfer Garrett McNamara, who holds the world record for riding this 78-foot wave in November 2011, just off Nazare -- where such exploits have always been understood.

"Meet the Fossils": Ancient life that powers our world
Thanks for reading CBS NEWS.
Create your free account or log in
for more features.
View CBS News In
CBS News App Open
Chrome Safari Continue
Be the first to know
Get browser notifications for breaking news, live events, and exclusive reporting.