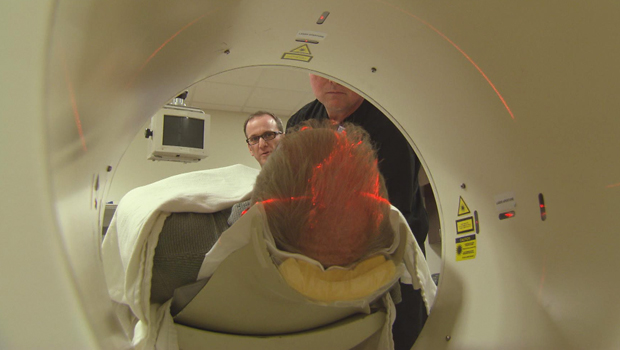 Medical researchers have made progress on many fronts in recent years. Still, some diseases have resisted medicine's best efforts, including Alzheimer's, which robs millions of their memories, their money and, finally, their lives. Now, after countless setbacks, there's some hope that the search for a treatment may not be "the longest journey" after all. Mo Rocca reports our Cover Story.

Every 67 seconds, someone in the United States is diagnosed with Alzheimer's disease. But the journey to a cure could begin in South America, in the country of Colombia, in Medellin.

It's here where Rocca met Marta and Jose, an ordinary couple with an extraordinary story -- which is plain to see as soon as our camera crew arrives in their apartment, and Marta appears to forget we're there.

Marta (not her real name, her family asked us not to reveal it) has Alzheimer's, a degenerative disease marked by memory loss, followed by loss of motor skills and, finally, death.

Even now, while Marta can still get around, she needs constant care.

"I try to make it so that she doesn't think about the disease, so that she lives with zero stress," said her husband. "I am in charge of everything in the house. I'm with her through thick and thin."

The physical burden on Jose is great; the emotional burden is even greater.

"That's one of the most painful things in my life," he told Rocca. "My wife, she seemed like an American. This was a woman who worked 24 hours a day; she was never tired, never at all. She had this amazing energy to work. And to see her on this downward curve, it's devastating for me. It is too much, too much internal pain."

Most of us associate Alzheimer's with the elderly. But Marta is not even 50 years old. Hers is Early-Onset Alzheimer's -- and it's hereditary.

Which is one reason why we've come to Medellin.

"My grandma died from it," Marta said. "They say she 'went silly.'"

Alzheimer's is devastating at any age, but particularly so for those with hereditary Early-Onset, which has been suggested to account for up to five percent of patients worldwide.

Yet Marta's extended family may hold the key to treatment for Alzheimer's everywhere.

Alzheimer's is already a global health crisis. It affects one in eight Americans over 65, and one in two over 85.

Dr. Eric Reiman of Phoenix's Banner Alzheimer's Institute, says it's one of the most common causes of death in the United States. By 2050, Dr. Reiman says, the U.S. will have about 16 million Alzheimer's patients, at a cost of $1 trillion annually.

"Because the number of people living to older ages is rapidly growing, we think that this single age-related disorder will take a financially overwhelming toll on us all, by the time my young adult children become senior citizens," Dr. Reiman said.

Still, there may be reason for optimism.

Using advanced imaging technology, Dr. Adam Fleisher is able to point out the beta-amyloid plaque, a build-up of protein, in the brain of a living Alzheimer's patient.

Most scientists believe the amyloid protein is a main cause of Alzheimer's.

"Before this scan, how would we detect the presence of the amyloid plaque?" asked Rocca.

"Well, the best way was at autopsy," said Dr. Sleisher, "which, obviously, is too late for the patient."

But while Alzheimer's can be more accurately diagnosed, a cure remains elusive. That's because by the time even mild symptoms appear, brain cells are already badly damaged by the plaque -- the brain has literally begun shrinking.

"We can see these Alzheimer's plaques building up in patients' brains 15 to 20 years before they likely would have any symptoms," Dr. Fleisher said.

But what if you had a group of people you knew would develop Alzheimer's, and you could treat them years before their brains were damaged at all?

If the disease were prevented in people otherwise fated to get it, that might lead to treatments for Alzheimer's patients worldwide.

Which is where Marta comes in. Her extended family in Medellin and the mountainous countryside around it are carriers of a rare genetic mutation that guarantees they'll get Early-Onset Alzheimer's, with symptoms developing in their 40s and progressing to death just a decade later.

This genetic mutation is so rare that only a handful of families around the world are known to have it. Marta's extended family is one of the best-documented.

"The first patient I saw was approximately 49 years old, and he had complete memory loss," said Dr. Francisco Lopera, director of the neuroscience group at the University of Antioquia in Medellin. "It was remarkable to me that his father had the same illness, and his grandfather, too. This was my first experience with hereditary Alzheimer's."

Dr. Lopera has been studying Marta's family since the early 1980s. Of its estimated 5,000 members, about a third carry the mutation.

Some family members believed that the disease they'd lived with generations was a hex.

"Some of the family members believed that the illness was caused by a curse that a priest put on their town," said Dr. Lopera.

It took a while to gain their trust, but today Dr. Lopera's team has collected the DNA of more than 3,300 family members. Three hundred of them are participating in one of the world's first drug trials aimed at preventing Alzheimers.

"We are very optimistic about this," said Dr. Lopera. "The medication has never been tried on healthy people."

The university's brain bank includes 75 brains of family members who died from Early-Onset.

Dr. Lopera personally knew many of the victims, "because I was doing neurological examinations."

The ravages of the disease weigh on the minds of younger family members, like Natasha (Marta and Jose's daughter). There's a fifty-percent chance that she carries the mutation.

"What scares me is the future," she told Rocca. "Not only for me, but if I am going to have children, will it affect them?"

She's given doctors a DNA sample, but says she doesn't want to know if she's a carrier.

"I prefer not to know," she said, "because I'll end up thinking about the future before I have to. In that case I would always be thinking, 'Oh! I will die of Alzheimer's,' so therefore I prefer that they do not tell me."

A breakthrough can't come soon enough for Natasha, or for another family member, Mauricio, who lives in the small village of Yarumal, north of Medellin. His mother, in her 50s, was in the final stages of her illness when we visited.

Mauricio left school at 13 to take care of his mother: "I bathe her, I dress her, I feed her, I do everything," he said. "I always wear myself out. They told me that I look tired. Right now, yes. I always feel exhausted."

Rocca asked him what he'd like to do with his life.

"I like to sing, I like computers. I'd like to study computers and become a professional in that." But, he said, he doesn't have time to think about the future -- or whether he himself carries the Alzheimer's gene.

"I don't care about what comes next, I am only thinking about what's happening now," Mauricio said.

Last December, patients in Dr. Reiman and Dr. Lopera's study received their first doses of an experimental plaque-reducing medication, a small but potentially important step on the journey toward a treatment for Alzheimer's.

Rocca asked, "Do the members of this family realize what position they're in, and how much hope they're giving to Alzheimer's patients all over the world?"

"Yes, they are more and more aware of that," said Dr. Lopera. "They know that this study can serve many people in the world. They know that they have the possibility and opportunity to make a contribution to the world."