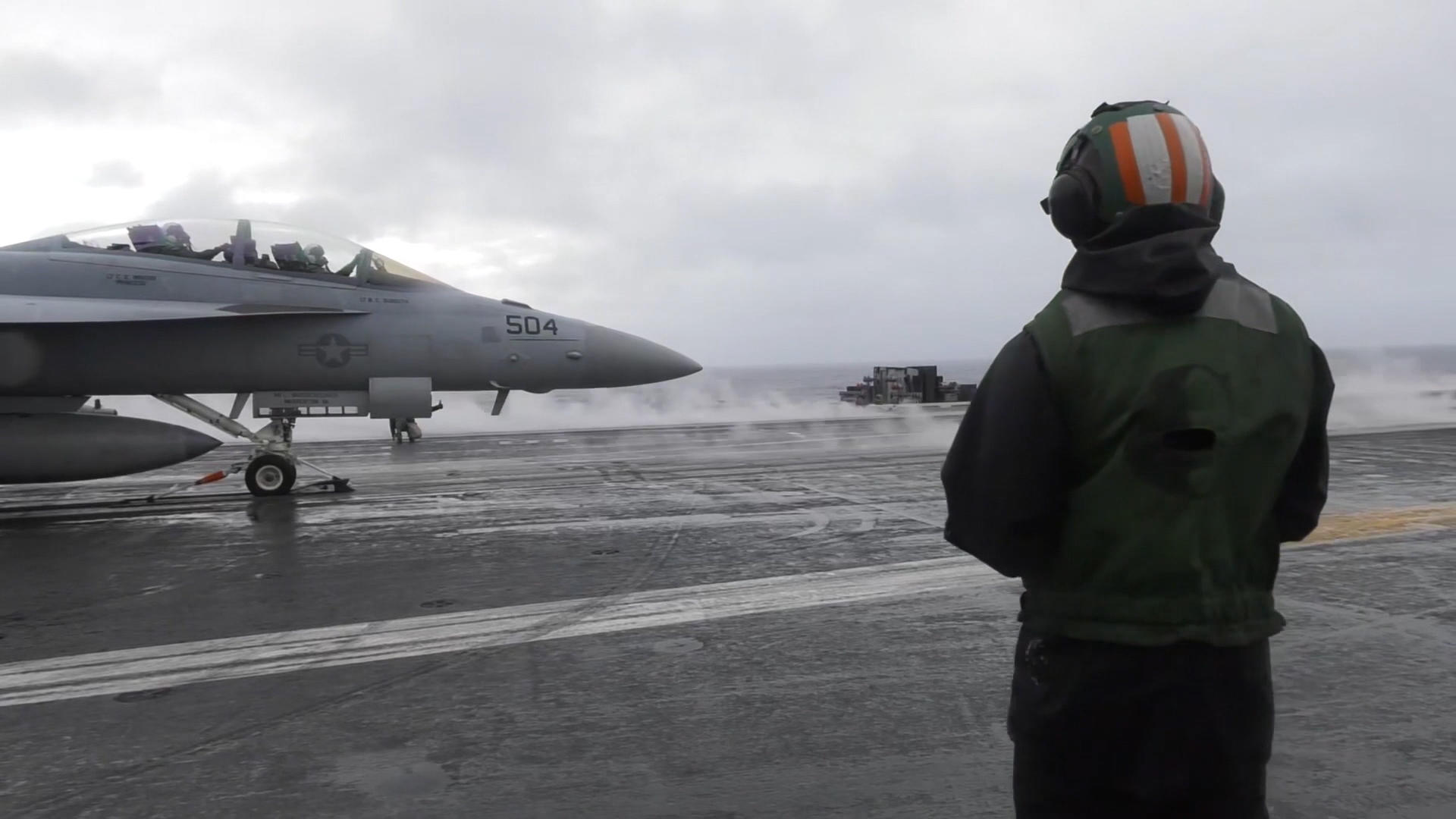 NATO, which just marked its 70th anniversary, is widely considered the gold standard of military alliances, binding countries on both sides of the Atlantic in common cause against Russian aggression. But President Trump complains that other members of the alliance don't pay their fair share of what it costs to defend Europe against the intimidation tactics of Vladimir Putin. The president has told aides he doesn't see the point of the alliance and has even mentioned withdrawing from NATO. Despite those misgivings, the U.S. and its NATO allies have been steadily increasing the frequency and size of their military exercises. Last fall, NATO held the largest one yet in Norway, one of the countries President Trump has singled out for failing to spend enough on defense. You might not think of Norway, which has a tiny military, as a vital NATO ally, but we found a country that is on the front lines with Russia and serves as NATO's eyes and ears in the High North.

Norway's F-16s are on 15-minute alert 24/7. Everytime Russian military aircraft are detected these pilots scramble to intercept them.

Videos they bring back show nuclear capable Russian bombers as they fly up and down the Norwegian coast. Most of the encounters are routine.

Lt. Gen. Rune Jakobsen: What we have seen lately is aggressive flying and simulated attacks against Norwegian exercises.

David Martin: How do you know it's a simulated attack?

Lt. Gen. Rune Jakobsen: The airman knows what an attack looks like.

David Martin:  So, they go to the point at which they would release their weapons?

Jakobsen tracked those "simulated attacks" from his command center buried deep inside a mountain. After the Cold War ended, a nuclear-proof bunker seemed positively old-fashioned, until lately when Russia became more threatening.

Lt. Gen. Rune Jakobsen: This is an illustration of a Russian attack formation, simulated attack that was flown in May 2017 not far north of, of this position.

David Martin: And the red dot is the target?

Lt. Gen. Rune Jakobsen: The red dot is the target.

David Martin: That doesn't look like the act of a friendly country.

Lt. Gen. Rune Jakobsen: No, that's not something you should do to your neighbor.

Norway shares a 120-mile border with its neighbor Russia. It is some of the most remote, rugged and beautiful landscape in all of Europe. Capt. Carina Vinterdal guards the northern sector with 120 soldiers.

David Martin: Are your soldiers armed?

David Martin: Do they ever had to use their weapons?

Capt. Carina Vinterdal: No, but we have to be prepared.

We went to the most remote of those outposts in the High North of the Norwegian mainland. One unit was just finishing its three weeks on watch and a new one coming in. To get there you have to lug your gear up a long steep staircase part of which is covered over to defend against the Arctic winter.

The observation post is manned year round and once you get to the top you can see why it's worth the trouble. These Norwegian soldiers are able to look deep into Russia and far out to sea, making this a key piece of terrain for the NATO alliance.

That's Russia over there and this is where the border with Norway ends. It's NATO's northern-most flank, and you don't need to be a military expert to know you can never leave your flank exposed. That includes the barents sea out there. Those are the home operating waters of Russia's northern fleet and are kept under constant surveillance by the U.S. and Norway.

This map shows what lies just over the horizon on that thumb of land called the Kola Peninsula. It is the home of Russia's northern fleet, naval bases, airfields and nuclear weapons storage sites which represent that country's single greatest concentration of military power, especially submarines.

Adm. James Foggo: They have a very capable submarine force and we've seen an increase in submarine activity over the last few years that causes me pause.

Adm. James Foggo, the commander of U.S. naval forces in Europe, is particularly concerned about this submarine, the Severodvinsk. Nuclear-powered and armed with land attack cruise missiles with a range greater than 1,000 miles.

Adm. James Foggo: The Severodvinsk is a brand new class of submarine. And, it's very capable and it's very quiet. So, that's the most important thing I think in submarine warfare.

David Martin: When you say quiet, you're saying harder to detect, harder to track.

David Martin: Does that sub come down into the Atlantic?

Adm. James Foggo: Suffice it to say that the Russians have increased-- their presence in-- all bodies of water around Europe and in the Atlantic.

David Martin: Have you ever lost the Severodvinsk?

Adm. James Foggo: I'd rather not comment on submarine operations-- to that specific level of detail.

Foggo won't comment, but Pentagon officials told "60 Minutes" that last summer the Severodvinsk slipped into the Atlantic Ocean and for weeks evaded all attempts to find it. In peacetime, losing a Russian sub in the Atlantic is embarrassing. In a crisis, it could be a disaster.

Adm. James Foggo: Think about the global infrastructure that rests on the bottom of the ocean.

David Martin: You're talking about the undersea cables.

Those fiber optic cables carry 99.4 percent of the data exchanged over the internet by the U.S. and its allies and trading partners. Depending on your point of view, they are either the backbone – or the Achilles' heel – of the world economy.

Adm. James Foggo: I'm not at liberty to talk about any of that.

That's because tracking Russian submarines is a top secret, day-in-day-out game of hide and seek. But the Norwegian military allowed "60 Minutes" aboard one of its maritime patrol planes to see what sub-hunting looks like.

The pilot, copilot and engineer are up front while the crew in the back scans the Norwegian Sea with radar and high powered cameras. Flying at less than 300 feet, they can clearly make out anything on the surface, including passing cargo ships. For what's under the water, they drop patterns of sonobuoys which send out sound waves.

That will bounce off a submerged submarine.

Maj. Leif Otterholm, the plane's tactical coordinator, has been flying these missions since the 1980s.

Maj. Leif Otterholm: It is very important to collect on remote locations.

David Martin: How big an area is it that you have to cover?

Maj. Leif Otterholm: The area of operations for this kind of aircraft is six times larger than the area of land in Norway, so it's quite, quite big.

David Martin: So, how frequently do you encounter the Russians out here?

Maj. Leif Otterholm: We encounter them regularly when we go further east.

Further east lies the headquarters of the northern fleet, and Norwegian patrol planes frequently spot Russian submarines while they're still on the surface.

But the most valuable intelligence is collected by a ship, one you've never heard of. There it is down there in the harbor, the crown jewel of Norway's fleet.

That's Norway's newest spy ship, the Marjata. It's at sea nearly 300 days a year monitoring the northern fleet, but just happened to be in port the day we arrived here in Kirkenes, the town closest to the Russian border. The Marjata flies the Norwegian flag but much of its eavesdropping equipment comes from the U.S.

Its mission is to collect intelligence on the operations of Russia's northern fleet.

Which Lt. Gen. Jakobsen says is arming itself with a new generation of precision guided weapons – and testing them in the waters off Norway.

David Martin: Are you able to monitor those?

Lt. Gen. Rune Jakobsen: Yeah, because most of their testing of new equipment is done up north of the Kola Peninsula and we are present there, every day with our maritime patrol aircrafts and our vessels at sea.

That daily haul of intelligence, all of which is directly relayed to the U.S. and NATO, didn't stop President Trump from sending this letter of complaint. Norway, he wrote, is "the only NATO ally sharing a border with Russia that lacks a credible plan to spend two percent of its gross domestic product on defense."

Ine Eriksen Soreide: Well, I think that he-– he has a fair point in-- in pointing out that we need to step up.

David Martin: So, these are all your predecessors.

Ine Eriksen Soreide: They are, they are. And they're all men.

David Martin: You're the first woman.

Before that, she was defense minister, in 2014 when all the members of NATO pledged to increase their military spending to two percent of their GDP.

David Martin: Have you met that pledge?

Ine Eriksen Soreide: No, we haven't met it yet, but we are moving in the right direction. And, we are doing a lot of big investments.

The biggest of those investments is the American-made F-35, a stealth fighter designed to evade state-of-the-art air defenses.

Ine Eriksen Soreide at F-35 Ceremony: It will dramatically increase operational capabilities both in High North and beyond.

Ine Eriksen Soreide: Well and it also functions well and it has capabilities that we need. Our F-16 has served us well, but they are starting to get old.

Those F-16s are going on 40 years old and were never designed to be stealthy. Until they are replaced by the F-35, Lt. Gen. Jakobsen told us, Norway's air force will be no match for Russia's modern air defenses.

Lt. Gen. Rune Jakobsen: Meaning today, if we had a conflict, we would not be able to fly in the northernmost part of Norway.

Lt. Gen. Rune Jakobsen: No, not in a serious crisis.

Last fall, NATO practiced what it would do in a serious crisis, bringing in 50,000 troops, 250 aircraft and 65 ships, all under the command of Adm. Foggo.

Adm. James Foggo: This is one of the largest NATO exercises since the Cold War.

Called Trident Juncture, it was a war game designed to repulse an invasion of Norway by an unnamed country whose identity was a mystery to no one.

David Martin: And the message to Russia is?

Adm. James Foggo: The message to Russia or anybody else that may want to challenge the alliance is think twice. You don't want to mess with us.

It was the first time in nearly 30 years the U.S. had sent a carrier strike group – the USS Harry S. Truman and its escorts above the Arctic Circle. A long way from the Persian Gulf and the wars in Iraq and Afghanistan.

David Martin: Did you feel that NATO just wasn't paying attention to-- to Norway?

Ine Eriksen Soreide: What we saw was that NATO, over many years, had been engaged heavily, for instance, in Afghanistan. And that's a very important mission but we also saw that some of the, I would say, core areas of-- of NATO, the territorial defense maybe had not had the same attention over years.

David Martin: Well, now, you have an American aircraft carrier--

David Martin: --operating off your coast.

Ine Eriksen Soreide: Yeah I think it is a very good way of showing that we have to practice in peacetime to be able to operate if the crisis occurs.

Norway will never have a military that can take on its much larger and more powerful neighbor.

But the pilots who fly these F-16s call themselves the Guardians of the North.  They can't stop the Russians, but they are the first to spot them.