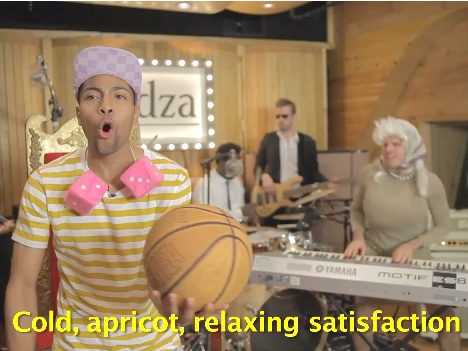 (CBS News) If you take some text and run it though Google Translate, you'll probably get a fairly accurate translation with a few minor issues. And if you do that process again with the translated text, the issues are likely to compound. So what happens if you keep on doing the process? Find out when it's applied to the "The Fresh Prince of Bel-Air" theme song in the fun music video above.

The experiment in language comes from one of our favorite experimental music groups, CDZA (short for Collective Cadenza), who write about their latest opus:

In the geekiest experiment ever, CDZA co-founder Joe Sabia shows us what happens when we translate the lyrics of the Fresh Prince of Bel-Air through every language in Google Translate (64 times), and then taking what remains and translating it BACK into English.

Featuring Jeremie Harris as Will Smith.

Technically speaking, all but the first verse were translated. The lyrics were translated from English to the world's most spoken language (Mandarin), to the second most (Spanish), to the third most, to the fourth most, ETC, putting all 64 languages in order by finding the demographic population size on every language on Wikipedia.

The last translation we put it through was "Esperanto", because apparently, only 10,000 people speak it. No one has an official language of "Latin", but we had to assume a lot of people are still able to speak it. So that was a bit ambiguous. Proper Nouns never really changed. Neither did numbers, as you can tell in the last stanza, "7,8". We have no idea why we did this.

As an additional fun fact, your blogger here was actually present to witness this latest work created, and I have to say it was interesting to find out how viral videos are made (Spoiler: there is a stork involved). Another excellent experiment in music and education from a group that we here at The Feed continue to love! And if you'd like to check out more amazing experimental music work from CDZA, click here to see our previous posts on them or click here to go to their website.