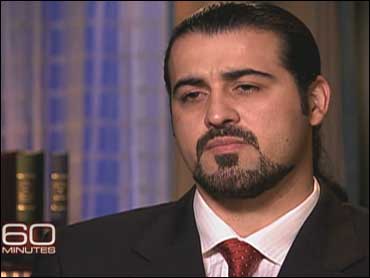 Much of the attention on Iran over the last few years has focused on its mysterious nuclear program. Another mystery that has received far less attention is torture in Iran's prisons.

It's a story the Iranian government doesn't want you to hear; a story a man risked his life to tell. His name is Ahmad Batebi, and quite by accident he became one of the most famous dissidents in Iran.

He says he endured years of torture in an Iranian prison, after his picture appeared on the cover of The Economist magazine. He escaped from Iran last year, and told CNN's Anderson Cooper how he did it.


To escape from Iran, Batebi was smuggled by car, and then by donkey, through mountains and minefields. He documented the dangerous journey on his cell phone camera. The men who helped him were from an underground Kurdish group and they were taking him into Iraq.

Batebi never intended to be a famous dissident. He wanted to be a photo journalist, but it was a picture of him that changed his life and almost got him killed.

In July 1999, demonstrations rocked Tehran. Outraged by a government crackdown on dissent, students took to the streets. Batebi, a film major at Tehran University joined in. When police fired into the crowd, a student standing next to Batebi was hit.

"The bullet hit the wall and ricocheted back into my friend's shoulder. I heard the bullet go by my face," Batebi remembered. "It sounded like a bumblebee going by my ear."

Trying to help, Batebi took his friend's shirt off. "To put pressure on the wound. It was bleeding. And so I tried to use his shirt to keep the blood in. Then we took him to the medical facility," he recalled.

(CORBIS)
After helping his friend, Batebi returned to the protest, and waved the bloody shirt to show what police had done. That's when a photographer took a picture of Batebi that would appear on the cover of The Economist and was seen around the world. Just days after the picture appeared, the government arrested him.

"They took me to a special prison for intelligence. And I was in solitary confinement for several months. After seven or eight months we went to court, but they didn't tell me where we were going. I was blindfolded, and I thought this was just part of my questioning. They sat me in a room and opened my blindfold," Batebi told Cooper.

That's when a judge showed him The Economist. Batebi told Cooper it was the first time he had seen the magazine.

He says the judge told him, "With this picture, you have signed your own death sentence."

"He said, 'You have defaced the face of the Islamic Republic that is a representative of God on earth. You have defaced it around the world. And therefore you have to be sentenced to death.' It took less than three minutes," Batebi recalled.

He was held in the notorious Evin Prison, on the outskirts of Tehran, which 60 Minutes could only photograph secretly from our hotel window.

Batebi says he spent 17 months in solitary confinement, trapped in a tiny cell not much bigger than a bathtub. "They kept the light on 24 hours a day. You have no information about the outside. You have no contact with the outside, and after a while you become mentally disoriented. This kind of torture doesn't affect you physically, but it does affect you mentally and emotionally."

"It can drive you crazy," Cooper remarked.

Psychological torture is one thing, physical torture another. And Batebi says there was plenty of that too.

"They kicked me in the teeth and broke them. There was a toilet that was stopped up with feces. They put my head into the toilet," he said.

Batebi told Cooper the bottom of his feet and his back were beaten with a cable, and that his testicles were beaten as well.

Asked how long this went on for, Batebi said, "This happened the whole time I was in solitary confinement. It also happened at other times."

"This is a sadistic government that uses various methods that are increasingly and exceedingly cruel and abhorrent," Lily Mazahery, an Iranian-American attorney who helps Iranian dissidents get asylum in the United States, said."

Iran denies having any political prisoners, but she and human rights groups say there are actually hundreds of them. Though she can't prove Batebi's account of torture, she believes him because she knows other prisoners who have also been tortured.

Asked what the purpose of torture in Iran is, Mazahery told Cooper, "To get these prisoners to say things that the regime wants them to say. In Ahmad Batebi's case for example they wanted him to say that the blood on the shirt that he held up was not really blood … that it was you know everything from tomato sauce to blood of a sheep or what have you."

Batebi says he refused to say that or betray his fellow student activist, despite all the torture.

"They also used sleep deprivation against you, kept you up day and night. And they hung you from the ceiling with your hands tied behind your back," Cooper remarked. "At least five or six times they did this," Batebi replied.

Batebi told 60 Minutes he never knew which days he'd be tortured or which technique they would use. Once he says, they cut him, and rubbed salt in his wounds.

"I hadn't slept for maybe 72 hours. I couldn't think clearly. I was drooling. I wanted to sleep but they would slap me to keep me awake. In the final hours when even the slapping wouldn't keep me up, they cut my arms and hands and put salt in my wounds so the burning would keep me awake."

One day he says he heard his mother's voice outside his cell. He didn't know back then that it was just an audio tape. "I would hear her voice. And I would say, in this place, where there's all this torture and all this pain, they've arrested my mother also. And maybe she's in the prison cell next to me or across from me. And of course this really bothered me a lot."

"The psychological torture is extremely effective. Telling you that your mother has died or your father has passed away or playing recordings of your loved ones being tortured or even raped," Mazahery told Cooper.

Mazahery said women are tortured too.

Human rights groups don't know how much torture takes place in Iran's prisons. But three years ago, Iran's judiciary did publicly admit that torture was used to extract confessions.

Batebi told 60 Minutes that several times during his torture he wished he would die, and a few times he thought he was going to. "They made me stand on a stool. Two other people were on stools, one to my left, one to my right. And they put a rope around our necks. And they said, 'You have a death sentence and you will be executed.' And then they kicked away the other two stools. The other two people were hanging and their feet turned blue and they died. I was still on my stool. I was shaking all over."

"Why would they take you to a place and make you think that they were gonna hang you and hang people on either side of you?" Cooper asked.

"It's part of the torture that they use to get a confession or to convince people not to commit another crime," Batebi replied.

Public hangings in Iran are especially cruel - instead of a quick drop to break their neck, the doomed are lifted up by a crane so they suffocate slowly.

Human rights activists say two teenaged boys were executed for being gay, but Iran's government says they raped a child. Iran executed more than 300 people last year, second only to China. The vast majority of executions were by slow hanging.

But Iran still has the occasional death by stoning, the prescribed punishment for women convicted of adultery. According to Mazahery, the convicted are literally buried in the ground, so that only their head, neck and part of their shoulders are exposed.

"It's not just to kill them. It it's to make them suffer before they die," Cooper asked.

There are also accounts of mutilation used as a form of punishment.

"Increasingly, for example, to cut off the right hand and the left foot of someone, or gouging people's eyes out," Mazahery explained.

"It's a sign to others that they have, in some way offended the state," Cooper remarked.

"Absolutely. It's as if they were to wear a scarlet letter forever around their necks," Mazahery said.

"The Islamic penal code includes a number of punishments which are torture under international law such as flogging, amputations, and stoning," explained Hadi Ghaemi, who leads a New York-based group called the International Campaign for Human Rights on Iran.

Ghaemi told 60 Minutes he has documented the cases of 45 Iranian prisoners who were tortured. He says mistreatment of detainees by the United States makes it harder to pressure Iran to stop torturing its prisoners.

"The work of human rights defenders worldwide is made so difficult and almost impossible in holding governments like Iran accountable and shaming them as long as we have torture in places like Guantanamo," he argued.

Iran denies that it tortures prisoners. An Iranian official who did not want to be identified told 60 Minutes, "There are no types of torture used on prisoners."

Three years ago, when Iran's judiciary admitted that torture was used to extract confessions, they had promised it would stop. But human rights groups say it has not.

"No. Not at all," Ghaemi told Cooper. "Right now all the testimonies that we collect talk about people being forced to make confessions, false confessions."

The irony of Ahmad Batebi's case is that the same picture which got him sentenced to death may have also saved his life.

"The fact that your photo had been seen around the world put pressure on the Iranian government in some ways to keep you alive," Cooper remarked.

"Yes, this was also a result. This was a good thing that happened as well," he replied.

Batebi's death sentence was reduced to 15 years, but after nine years he began having seizures. Last spring he was released temporarily for medical treatment. That's when he decided to make a run for it, documenting his three day journey from Tehran to Iraq on his cell phone camera.

His attorney says she convinced her White House contacts to allow him to enter the U.S. for humanitarian reasons. He lives in Washington now, working in radio for Voice of America, trying to adjust to a new country, a new life and trying to make sure that the others still in prison are not forgotten.

Asked if he feels free now, he told Cooper, "No, I don't feel free. I have a responsibility to the people imprisoned in Iran whose human rights are being violated. I have to get their message out. And it's a big responsibility that doesn't leave one free. But to an extent I do feel free. I live in a free country and I've left prison."

"So, your body is free but your heart is not?" Cooper asked.

"That's exactly the way it is," Batebi replied.