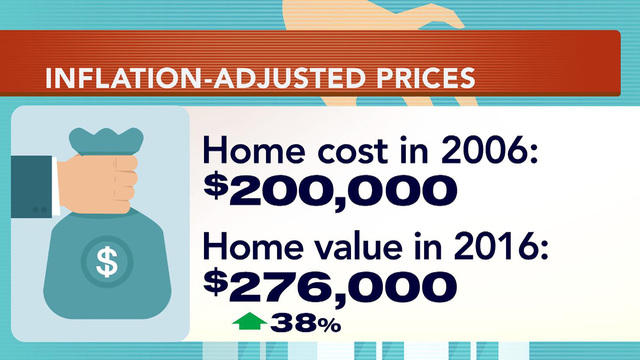 The number of sales of existing homes this year is expected to reach nearly 5.5 million – the highest since 2006 – but inventory is down.

According to real estate firm Trulia, the number of available starter homes dropped by more than 10 percent.

What does all this mean for the millions of Americans who are considering buying a home next year?

According to the National Association of Realtors/U.S. Census Bureau, existing home sales are up 5.9 percent from last year, and new homes are up 17.8 percent. But inventory is also down, which has driven up prices and made it a “little harder” to get into the housing market, Schlesinger explained.

The National Association of Realtors predicts 30-year fixed mortgage rates could climb up to about 4.6 percent by the end of 2017. But Schlesinger said that’s not a reason to freak out.

“Now, I’m not saying everybody can pull in that extra $115 a month or so, but a lot of people can and the economy is slowly improving, and if your wages are rising enough, you should be able to still afford it,” Schlesinger said.

Schlesinger also cited possible implications for the housing market under the Trump administration. Republican lawmakers and the president-elect have proposed tax reform. And Steven Mnuchin, who’s been tapped for Treasury secretary, has proposed dropping the tax rate but limiting itemized deductions – which means mortgage interests.

“Now the industry – the housing industry, the real estate people out there – they’re freaking out because obviously, one component of making a house affordable is the deductibility of mortgage interest,” Schlesinger said. “They’re going to fight hard against that.”

Schlesinger said a possible compromise would be to limit deductions to about some $200,000 for a family, which would only really impact the wealthiest Americans.

But the limited deductions, Schlesinger said, would only really impact the wealthiest of Americans, like those with a million-dollar mortgage.

“So there’s no limit now. There are certain phase-outs that push into the alternative minimum tax, but most Americans can take advantage of mortgage interest deductions,” Schlesinger said.

“So with the prices back to 2006 levels, has the housing market now effectively recovered?” asked CBS News correspondent Anthony Mason.

“Well, the prices are back at nominal levels. Don’t glance over – nominal just means the number itself. But if you actually look at inflation, we see that house prices are still about 16 percent below where they were,” Schlesinger said, then gave an example.

“So inflation does count,” Schlesinger said.