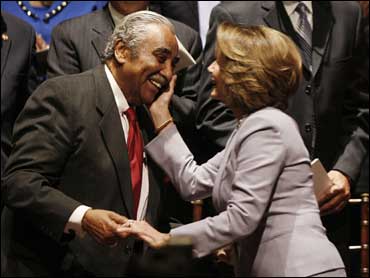 The new Democratic-controlled Congress opened for business at the stroke of noon on Tuesday, eager to join President-elect Barack Obama in tackling the worst economic crisis in generations.

Vice President Dick Cheney called the Senate to order at midday, then began the ceremonial duties of swearing in 32 senators who triumphed in November elections.

Democrat Roland Burris of Illinois was not among them - informed he would not be seated because his paperwork was not in order. He pledged a lawsuit, the latest twist in a political drama that began when he was appointed by Gov. Rod Blagojevich, charged with having attempted to sell the seat.

Across the Capitol, Lorraine C. Miller, clerk of the House, rapped the opening gavel, prelude to a day of ceremony highlighted by Nancy Pelosi's re-election as speaker.

Democrats looked ahead to two years of increased strength after picking up seats in both houses - at least seven in the Senate and 21 in the House. With their gains - as well as with Mr. Obama in the White House after Jan. 20 - they looked forward to an agenda of fixing the economy, ending the war in Iraq, expanding health care and more.

The Senate galleries were crowded as Cheney administered the oath to senators in groups of four. Sen. Joseph Biden of Delaware was among them, taking the oath of office for a seat that he has held for more than three decades, and will relinquish in a matter of days to become Mr. Obama's vice president.

The atmosphere in the House was family-friendly as children, grandchildren and other relatives joined lawmakers in the large chamber, lit for television.

Sean and Tommy Rooney, ages 5 and 7, wore T-shirts with their last name on the back. Their father, Rep. Thomas Rooney, is a freshman Republican from Florida.

Apart from Biden, at least two lawmakers won't be there for long. Rep. Hilda Solis, D-Calif., was nominated as secretary of labor in the Obama administration, and Sen. Hillary Rodham Clinton is departing Congress to become Secretary of State.

For the lawmakers just settling in, and the veterans returning, the work was already well under way. Aides to Mr. Obama and senior congressional officials have been at work for weeks crafting an economic stimulus plan that could reach $1 trillion or more. Tax cuts, federal spending, aid to the states, all designed to inject cash into an economy where consumer spending has plummeted, manufacturing withered and job losses grown.

Not only does Mr. Obama want to roll out a multibillion-dollar economic stimulus package soon after he's sworn in on Jan. 20, he also wants it to garner 80 or more Senate votes, according to the Politico.

Mr. Obama spent much of Monday in Congress, meeting with leaders in both parties and pledging to consider ideas advanced by Republicans.

They, in turn, said they believed his pledge of bipartisanship.

Amid the ceremony, Burris was at the center of a remarkable piece of political theater.

He pledged a lawsuit to win the seat, but Democratic officials also said it was likely his case would be referred to the Rules Committee, sidetracked for an indefinite period. Burris has already gone to court to win an order that would force the Illinois secretary of state to sign his formal paperwork.

One other Senate seat was in limbo as the new Congress convened.

Democrat Al Franken holds a 225-vote lead over former Sen. Norm Coleman in Minnesota, a result certified on Monday by the state Canvassing Board. He has not yet received a certificate of election, and with Republicans threatening to protest, Democrats made no attempt to seat him.

In a bit of housekeeping, Democrats also were repealing the six-year term limit for committee chairman. It was a legacy of the Republican Revolution that swept through Congress in 1994, and in erasing it, Democrats evinced confidence in the strength of their majority status.