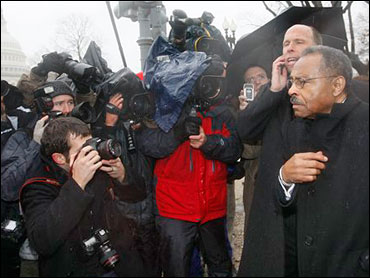 Roland Burris announced Tuesday he was rejected for Barack Obama's Senate seat, in a bizarre rainy-day scene on the Capitol grounds as lawmakers awaited the gaveling of the 111th Congress into session.

Standing amid a huge throng of reporters and television cameras in a cold and steady rain, Burris, 71, declared that he had been informed that "my credentials are not in order and will not be accepted."

"Mr. Burris is not in possession of the necessary credentials from the state of Illinois," Senate Majority Leader Harry Reid of Nevada later said in his speech opening the new session of Congress.

It was a spectacular demonstration of political gridlock at a time when the Democratic-controlled Congress has been eagerly awaiting Mr. Obama's inauguration while nervously anticipating tense work on a much-discussed stimulus program to steady the faltering economy.

An attorney for Burris, Timothy W. Wright III, said that "our credentials were rejected by the secretary of the Senate. We were not allowed to be placed in the record books. We were not allowed to proceed to the floor for purposes of taking oath. All of which we think was improperly done and is against the law of this land. We will consider our options and we will certainly let you know what our decisions will be soon thereafter."

Asked what his options were, Wright said there possibly could be a court challenge and he said that Burris also would continue to talk to the Senate leadership.

There had been earlier indications that the Senate would disallow Burris to take his seat, at least in part because his letter of appointment from Blagojevich was not co-signed by Illinois Secretary of State Jesse White.

Some of Burris' supporters have bemoaned the fact that Democrats would stand in the way of the Senate gaining its only black member. Burris himself downplayed the issue of race, telling reporters: "I cannot control my supporters. I have never in my life, in all my years of being elected to office, thought anything about race."

On CBS' The Early Show this morning, Burris dismissed his critics, saying his appointment by the scandal-plagued governor is valid.

"They're causing the drama, my appointment is legal. Are you saying there is something wrong with me? I'm qualified," Burris, who was the first African-American elected to statewide office and was the former Illinois attorney general, said. (

In his defense, Burris, 71, pointed to Blagojevich's decision Monday to hold an election for a successor to Rep. Rahm Emanuel, D-Ill., Mr. Obama's chief of staff. Burris said it proves the embattled governor still has legal authority to carry out his duties.

"As I read the U.S. Constitution," Burris said, it says the "governor shall fill a vacancy, and as a former attorney general of my state, I have no knowledge of where a secretary of state has veto power over a governor carrying out his constitutional duties."

Senate Majority Leader Harry Reid, D-Nev., said Monday that Burris cannot take his seat because he "has not been certified by the state of Illinois." Additionally, Senate Democrats say Burris' appointment is tainted because of the charges Blagojevich faces.

Burris has threatened to sue Senate Democrats if they do not swear him in as the chamber's only black member.