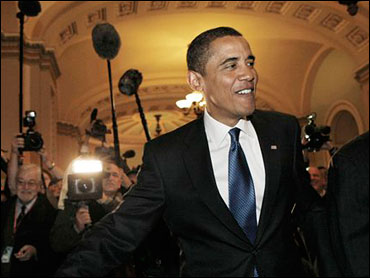 President-elect Barack Obama wants his first legislative push in office to include significant Republican support, despite Democrats already enjoying majorities in both houses of Congress.

Not only does Mr. Obama want to roll out a multibillion-dollar economic stimulus package soon after he's sworn in on Jan. 20, he also wants it to garner 80 or more Senate votes, according to the Politico. The plan includes tax cuts totaling up to $300 billion for individuals and businesses, which is significantly higher than had been signaled earlier and is believed to placate any Republican unrest at such sizable spending.

After meeting with Mr. Obama on Monday, House Minority Leader John Boehner, R-Ohio, said he was concerned about the plan's cost, which he said would be "paid for by our kids and grandkids." Republican lawmakers want more details, Boehner said, but he also indicated that the idea of tax cuts "brings excitement to Republicans because it does put money in the economy right away."

"A package like this as it turns out, is one that reaches out both to Democrats and Republicans," Rothenberg said.

Before meeting with Senate Majority Leader Harry Reid, Mr. Obama said, "This is not a Republican problem or a Democratic problem at this stage. It is an American problem and we're going to all have to chip in and do what the American people expect."

On his first full day in Washington after winding up his holiday vacation, Mr. Obama plunged into crisis talks Monday with congressional leaders after indications that the economic recovery plan, which could amount to around $800 billion in new spending, would take longer to enact than he hoped.

Mr. Obama has insisted that bold and quick action is necessary if the United States is to rebound from the greatest economic crisis since the Great Depression of the 1930s. He also wants the plan to tackle rising unemployment and hopes to create 3 million new jobs.

"The economy is very sick," Mr. Obama said before meeting Reid, a fellow Democrat. "The situation is getting worse. ... We have to act and act now to break the momentum of this recession."

"I expect to be able to sign a bill shortly after taking office," he said. Pressed on the timing, he said, "By the end of January or the first of February."

Mr. Obama met earlier in the day with House Speaker Nancy Pelosi, a Democrat, as he set a tone of urgency for dealing with a financial situation that he described as "precarious."

"We will hit the ground running ... to address the pain being felt by the American people," Pelosi promised as she welcomed Mr. Obama to her office.

"This president-elect has put incredible urgency in front of this proposal. I still think it's gonna take about a month to get it done," former Minnesota Congressman Vin Weber told CBS News.

Congressional aides briefed on the measure say it is likely to include some $200 billion to help revenue-starved states pay for health care programs for the poor and other operating costs. A large part of the new spending would go for infrastructure projects, blending old-fashioned road and bridge repairs with new programs to advance energy efficiency and rebuild health care information technology systems.

The tax cuts for individuals and couples would be similar to the rebate checks sent out last year by the Bush administration and Congress in a bid at that time to boost the slowing economy. A key difference is that the tax cuts this time around may be awarded through withholding less from worker paychecks. That provision would cost about $140-150 billion over two years.

For businesses, the plan would allow firms incurring losses last year to take a credit against profits dating back five years instead of the two years currently allowed.

Another provision brought to the negotiations by the Obama team would award a one-year tax credit costing $40-50 billion to companies that hire new workers, and would provide other incentives for business investment in new equipment.

Meanwhile, the new Congress grappled with its own internal issues. Roland Burris, the choice of scandal-plagued Illinois Gov. Rod Blagojevich to assume Mr. Obama's vacated Senate seat, was refused entry to the Senate because his official letter of appointment was not co-signed by Illinois' secretary of state.

Mr. Obama arrived Sunday night in Washington just hours after Richardson withdrew from consideration as commerce secretary amid a grand jury investigation into how some of his political donors won a lucrative state contract.

The Richardson withdrawal marked the first major hiccup in a smooth transition that saw Mr. Obama select his Cabinet in record time, largely because of the magnitude of the economic and national security challenges facing the new administration.

Mr. Obama has also decided to fill the top two U.S. intelligence jobs with two men short on direct experience in intelligence gathering, signifying the Democrat's intention to distance himself from such Bush administration policies as harsh interrogations, waterboarding and warrantless wiretapping.

Former Clinton White House Chief of Staff Leon Panetta, a longtime congressional veteran and administrative expert, is being tapped to head the CIA.

Retired Adm. Dennis Blair, a former chief of the U.S. military's Pacific Command who devised a post-Sept. 11 attacks anti-terrorism effort in southeast Asia, is Mr. Obama's choice to be director of national intelligence, a selection expected for weeks, according to two Democrats who spoke Monday on condition of anonymity because Mr. Obama has not officially announced the choices.