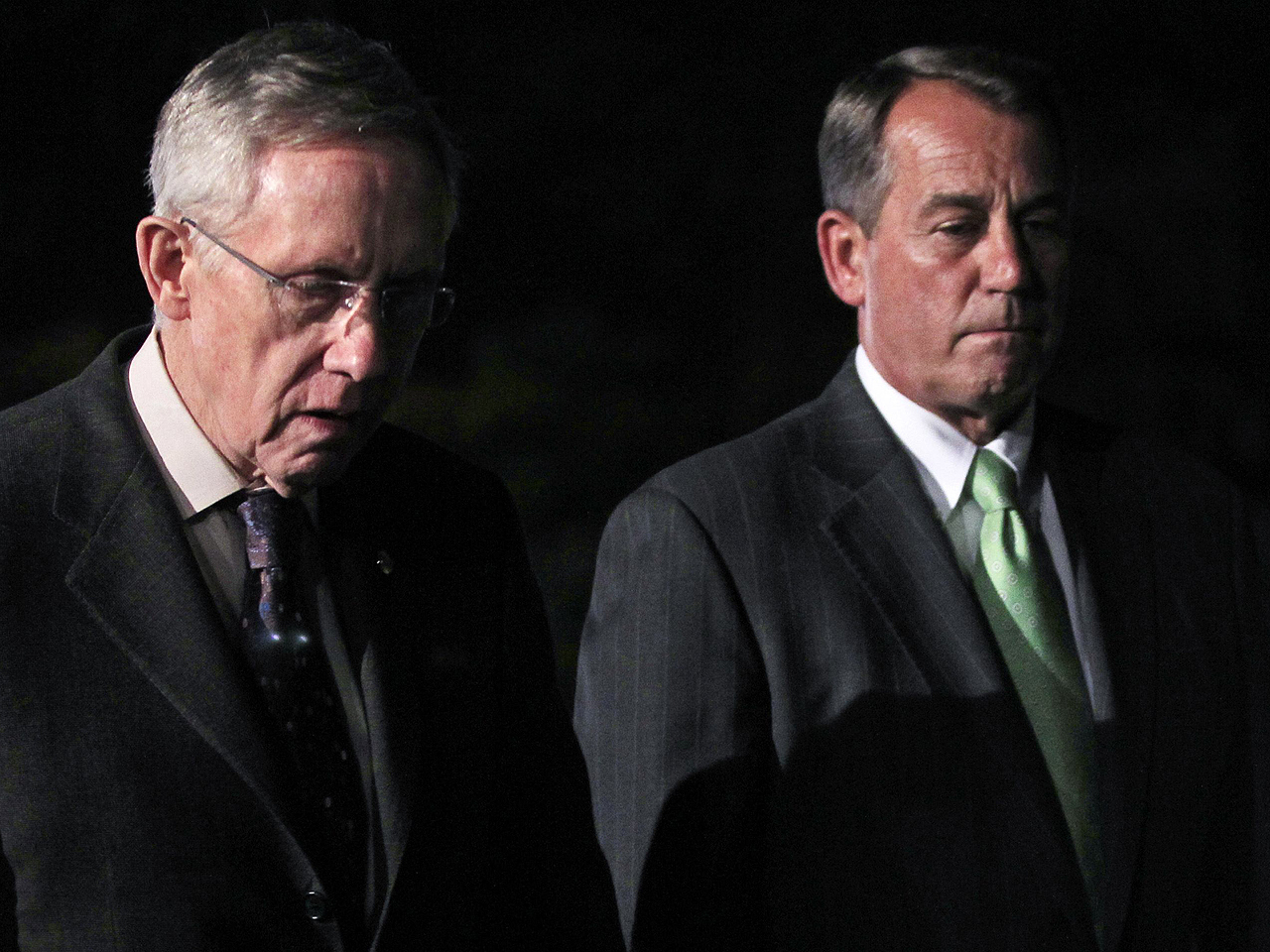 President Obama emerged from a meeting with House Speaker John Boehner and Senate Majority Leader Harry Reid this evening announcing that no budget deal has been made, but that they are "further along today" than they were yesterday.

Obama is hopeful of a deal in the morning but said, "I'm not yet prepared to express wild optimism," reports CBS News White House correspondent Mark Knoller.

With a government shutdown looming, the GOP-led House has passed a bill that would fund the government for a week and also fund the Department of Defense for the rest of the fiscal year.

The measure, which includes $12 billion in spending cuts, passed 247 to 181. The vote was largely along party lines, though six Republicans opposed it and 15 Democrats supported it.

The passage was likely symbolic, since it is unlikely to pass the Democrat-led Senate and President Obama has vowed to veto it if it does. It appears designed to boost Republican arguments that Democrats should be blamed if the government shuts down.

In addition to funding the government for another week and providing $516 billion for the Department of Defense, the bill includes a policy provision that would prohibit federal or local funding paying for abortions in Washington D.C.

"If you vote against this bill you are voting against the troops who are engaged in three wars," said House Appropriations Chairman Hal Rogers, who introduced the measure.

Added House Speaker John Boehner: "There's no policy reason for the Senate to oppose this bill and keep the government running." House Majority Leader Eric Cantor said there is bipartisan support for the bill in the Senate and urged the Democrat-led chamber to take it up.

Senate Majority Leader Harry Reid countered that Republicans know that Democrats won't pass a bill that includes $12 billion in cuts they have not agreed to, as well as the abortion language. (Previous extensidons, by contrast, included $2 billion in cuts per week -- 1/6th as much.)

The White House vowed to veto the bill earlier in the day, calling it "a distraction from the real work that would bring us closer to a reasonable compromise for funding the remainder of Fiscal Year 2011 and avert a disruptive Federal Government shutdown that would put the Nation's economic recovery in jeopardy."

The administration says President Obama would be willing to sign a "clean" short-term budget extension bill "if negotiations are making significant progress." But Mr. Obama has made clear he is unwilling to continue signing short-term resolutions to fund the government.

The president, Boehner and Reid held a meeting on the budget at the White House on Thursday afternoon, but they did not emerge with a deal.

"We're going to continue to work to get this done," Reid said.

The three men also met for close to two hours late Wednesday night to try to hash out a budget agreement to cover the next six months of federal spending.

House Republicans want the budget deal to include the $61 billion in cuts that exist in the budget bill they passed earlier this year, as well as controversial policy riders including provisions that would strip government funding for Planned Parenthood, EPA, Public Broadcasting and health care implementation.

Democrats say they are willing to cut $33 billion from the budget and have cast Boehner and the Republican leadership as unwilling to compromise because they are being held hostage by the Tea Party.

Reid said earlier in the day that all parties have agreed to certain level of spending cuts and that the negotiations are stalled over the policy riders that Republicans want to add to the bill.

"The only thing holding up an agreement is ideology," Reid said. "I'm sorry to say... that my friend the speaker and the Republican leadership have drawn a line in the sand."

An aide to Boehner told CBS Newsthat Reid's assertion that the negotiations are stalled over policy riders is false. There is no agreement on spending cuts or policy, the aide said.

Without a deal, a government shutdown begins on Saturday. That would mean some federal operations and services will stop running.Hundreds of thousands of government workers would be furloughed, tens of thousands of military personnel would not immediately be paid and national parks some government agencies would be closed.

Government shutdown: What it means for you
Senator Joe Manchin: Don't pay us if government shuts down
Obama: Shutdown would hurt American people
DC rep: Gov't shutdown "equivalent of bombing"