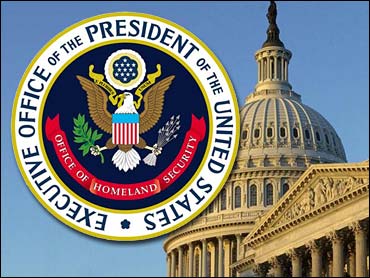 The House voted overwhelmingly Tuesday to approve the first bill to finance the new Department of Homeland Security and shower $29.4 billion on local emergency workers, airport screeners and a new drive against bioterrorism.

Though they supported it unanimously, Democrats said the Republican-written measure would fall short of meeting the nation's needs for protecting ports, borders and airports. For this they blamed the tax reductions President Bush and the GOP have shepherded through Congress over the past three years, absorbing money that could have gone to other needs.

"The majority party in Congress has decided that instead, their No. 1 and virtually their only priority is tax cuts," said Rep. David Obey, D-Wis.

Republicans said the bill would continue the upgrades in domestic safety that began after the attacks of Sept. 11, 2001, and said Democrats are never satisfied when it comes to spending.

"A lot of people would want us to spend tons and tons of more money, and believe me if we thought it was useful to do so, we'd have no compunction against doing that," said Rep. Harold Rogers, R-Ky., chairman of the House Appropriations Committee subcommittee, which wrote the bill.

The House approved the measure 425-2. The Senate has yet to produce its version of the legislation.

The measure would finance the 22 agencies — and more than 170,000 workers — merged into a new Cabinet-level department by legislation enacted last November.

The biggest federal reshuffling in half a century was initially opposed by Bush and derided by critics as a rearrangement of the federal bureaucracy. Eventually, however, it gained his support and broad bipartisan backing as both parties feared a political price for opposing it.

The department includes the Coast Guard, Transportation Security Administration, Customs Service and Border Patrol — but not the FBI or CIA.

Until now, its component agencies were financed in several separate spending bills. The legislation considered Tuesday would provide $536 million, or 1.9 percent, more next year than what those agencies are getting in 2003.

"The bill would not even provide enough to keep up with inflation, never mind step up the pace of improvements to our security," said Rep. Jose Serrano, D-N.Y.

The White House said it supported the measure because it "largely tracks the administration's request." It would exceed Bush's proposal by more than $1 billion.

In a letter to lawmakers, the White House budget office warned that the bill — and the 12 other spending measures Congress is starting to write for next year — must heed an agreement to limit their total to $785 billion. The rest of the $2.2 trillion budget is for automatic benefits like Medicare.

In a day of fights over amendments, Republicans used a party-line 222-200 vote to block Obey from proposing $1 billion more for the bill, to have been paid for by erasing part of this year's tax cuts for people earning more than $1 million annually.

In another procedural vote, the GOP barred another Democratic amendment to set up guidelines for when the agency can help local officials. Democrats have criticized the department for helping locate Texas Democratic lawmakers who left the state in May during a legislative fight over redistricting.

Republicans used procedural moves to strip one provision making it harder to award federal contracts to U.S. firms that have moved offshore to avoid taxes, and another blocking a plan to screen airline passengers by checking credit reports and other records.

Overall, the measure would provide $4.4 billion for local firefighters, law enforcement and other emergency responders, nearly $900 million more than Bush proposed. Included was $1.9 billion distributed by formula among state and local governments, $894 million over this year's total.

There was $5.6 billion over the coming decade — including $890 million for 2004 — for Bush's proposed Project Bioshield, under which the government would acquire antidotes and take other steps to counter bioterror.

The Transportation Security Administration would get $5.2 billion, down $639 million from this year. The new agency has been criticized by both parties for hiring too many screeners and inept management.

New technologies would get more money, including money to develop ways to protect airliners from missiles and detect germs sprayed over cities. Bush would get only $350 million of the $480 million he wants for using new identification technologies to screen and track visiting foreigners.

The bill contained fewer home-district projects than is common for spending measures. Among the few was language recommending that $19.5 million for bridge alterations be divided among Mobile, Ala.; Burlington, Iowa; LaCrosse, Wis.; Chelsea, Mass.; and New Orleans.