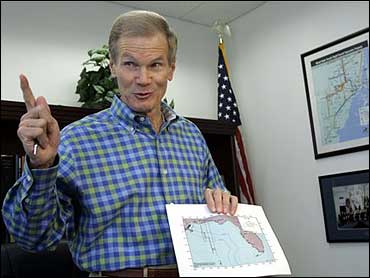 Congress has taken a major step toward allowing oil and gas drilling in coastal waters that have been off limits for a quarter-century.

Still, a battle looms in the Senate over the issue. And the Bush administration's support for the legislation, which was approved Thursday by a 232-187 vote in the House, is lukewarm.

The House bill would end an Outer Continental Shelf drilling moratorium that Congress has renewed every year since 1981. It covers 85 percent of the country's coastal waters — everywhere except the central and western Gulf of Mexico and some areas off Alaska.

Rep. Richard Pombo, R-Calif., a leading proponent for lifting the ban, said he believes a majority of the Senate wants to open the protected waters to energy companies.

Asked about White House opposition to some parts of the bill, especially a provision that would give tens of billions of dollars to states that have drilling rigs off their coasts, Pombo said, "I dare them to veto this bill."

"They don't like us giving money back to the states. I think it's right," Pombo told reporters after the vote. Forty Democrats joined most Republicans in favor of ending the drilling moratorium.

In the Senate, the measure is likely to face a filibuster from Florida senators and possibly others from coastal states that fear offshore energy development could threaten multibillion-dollar tourist and recreation businesses if there were a spill.

The Senate is considering a limited measure that would open an area in the eastern Gulf of Mexico, known as Lease Area 181, that comes within 100 miles of Florida. It is not under the moratorium. Even that is unlikely to pass unless its sponsors get 60 votes to overcome a filibuster from the Floridians.

Sen. Pete Domenici, R-N.M., chairman of the Energy and Natural Resources Committee, said he would pursue efforts to open the Lease 181 Area. The committee's ranking Democrat, Sen. Jeff Bingaman, also of New Mexico, criticized the House-passed bill, saying it would eventually create "a huge hole in our federal budget and undermine environmental protections on our lands and off our coasts."

Sen. Mary Landrieu, D-La., said Friday that Senate GOP leaders and Domenici have agreed on a new revenue-sharing plan that would funnel 37.5 percent of future royalties from Area 181 development to the four energy producing Gulf states, and also open an additional 6.3 million acres south of Area 181.

But that proposal does not address the Florida senators' concerns and may generate new opposition to Domenici's bill from senators opposed to changing the royalty distribution formulas.

Domenici later said in a statement, "I've had a number of productive meetings with Sen. Landrieu. ... We've made progress ... but we're not there yet."

Still, the House vote was a huge victory for Pombo, two Louisiana lawmakers — Republican Bobby Jindal and Democrat Charlie Melancon — and Rep. John Peterson, R-Pa., who spearheaded the drive to lift the moratorium.

Only six weeks ago, a proposal by Peterson to open coastal waters to natural gas development fell 14 votes short.

This time, they included a provision that would allow states to keep the moratorium in place if they opposed drilling and changed the revenue sharing so that states' share of royalties would soar eventually as much as 75 percent.

The government signs leases to let oil companies drill offshore. Once the companies recoup their original investments, payments to the public, or royalties, kick in. A single oil lease can yield millions of dollars in royalty payments ... and as oil prices go up and up, so do the royalties. But incredibly, someone in the government left the royalty part out of thousands of long-term leases signed in 1998 and 1999, reports CBS News correspondent Sharyl Attkisson.

The Gulf states where most U.S. offshore energy resources are being tapped, now get less than 5 percent of the royalties. For example, Louisiana's royalties would go from $32 million last year to a total of $8.6 billion over the next 10 years — and even higher after that.

The Interior Department estimated that the changes could cost the federal government as much as $69 billion in lost royalties over 15 years and "several hundred billion dollars" over 60 years.

The White House issued a statement saying it favors much of the bill but strongly opposes the changes in royalty revenue sharing, which it said "would have a long-term impact on the federal deficit."

The Interior Department estimates there are about 19 billion barrels of recoverable oil and 86 trillion cubic feet of natural gas beneath waters under drilling bans from New England to southern Alaska.

Supporters of the drilling moratorium argue there's four times that amount of oil and gas available in offshore waters open to energy companies, mainly in the central and western Gulf of Mexico and off parts of Alaska.