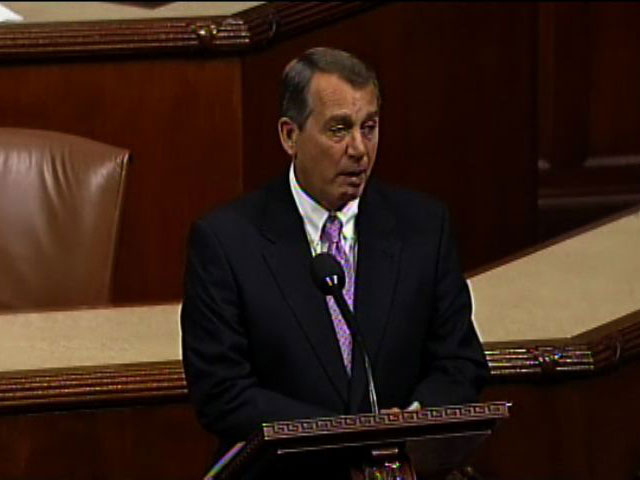 The House gathered on Wednesday to condemn Saturday's shootings in Tucson, Arizona, and to honor and pray for the victims - including Democratic Rep. Gabrielle Giffords, who was shot in the head and remains hospitalized with critical injuries.

Six people were killed and 14 wounded in the shootings, which allegedly took place when 22-year-old Jared Lee Loughner opened fire at a "Congress on Your Corner" meeting outside of a local grocery store.

"We are called here to mourn," said House Speaker John Boehner, who called to the House floor a resolution condemning the attack, and led the remarks in tribute to the 20 victims. The House later passed the resolution by unanimous consent.

"We're thankful, so thankful, that Gabby is still with us," Boehner said, his voice breaking with emotion at several points during his remarks. "Bravery and quick thinking prevented a larger massacre - turning innocent bystanders into heroes."

"Our hearts are broken but our spirit is not," Boehner continued. "This is a time for the House to lock arms, in prayer for those killed and wounded, and in resolve to carry on the dialogue of our democracy."

"We will have the last word," Boehner pledged.

In stories about the victims, and through recounts of the sequence of events on Saturday, speakers paid tribute to the sacrifices and bravery of those who were injured and killed. Many recounted personal shared experiences with Giffords, and praised her dedication to serving and engaging with her constituents in Arizona's 8th congressional district.

"It is especially tragic that those who lost their lives and those who were wounded had come together as the resolution presents, to participate in an activity that reflects the best of our democratic tradition," said House Minority Leader Nancy Pelosi, in her remarks. "American democracy is founded on our commitment to a contest of ideas - not violence. Political disagreement and dissent must never violate our nation's values as expressed in the Constitution - of free expression, peace, and peaceful assembly."

"In this hour of anguish, we seek renewed commitment to hope, to civility, to peace among the American people," Pelosi continued.

Most speakers steered clear of controversial political issues during their remarks, although some took the opportunity to urge fellow representatives to seek solutions that might prevent similar acts of violence in the future.

"Our hearts are open now, as we recognize the victims," said Ohio Democrat Dennis Kucinich. "So let us be open to a new direction where we and this nation can take an organized approach to deal with the causes of violence - not just the effects."

Democratic Rep. Jane Harman of California also called on Congress to consider "sensible" federal gun control laws in the wake of the shooting.

New York Rep. Carolyn McCarthy, whose husband was killed and son injured in a 1993 mass shooting on the Long Island Railroad, likened Saturday's rampage to her own experiences. "It's so parallel, it's scary," she said.

"I say to all of you, time will heal you," McCarthy continued. "[Giffords] has brought this chamber together. It's just a shame that a tragedy had to bring us together."

House Majority Leader Eric Cantor condemned the violence as an "assault on the open exchange of ideas between legislators and the people to whom they are accountable," and praised responders on the scene for their actions.

"This inexplicable crime reminds us that there is evil in the world," Cantor said, but emphasized that "America is a country of compassion, community, and empathy. We will stand with the victims and their families and pray and mourn with them."

Congress broke for a prayer service in mid-afternoon, after which House members returned to the floor to continue delivering remarks.

President Obama will deliver remarks at an evening memorial service in Tucson on Wednesday.