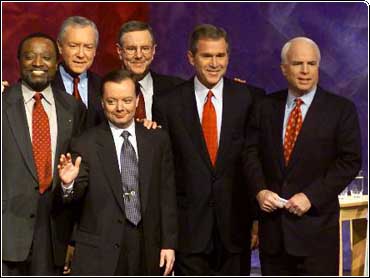 It looked on the outside like it would be a carnival inside, CBS News Correspondent Cynthia Bowers reports, as all six Republican candidates arrived for their final face-off before the Jan. 24 Iowa caucuses.

Inside, however, the setting was more subdued. The only real debate was over tax cuts, and naturally front-runner Gov. George W. Bush was put on the defensive.

Bush got into it with his closest competitor in Iowa, Steve Forbes, who suggested Bush's tax cuts in Texas didn't amount to much.

"Most Texans have never seen those tax cuts and the same thing's going to happen with your proposal on the federal level," said Steve Forbes.

Bush responded, "You know something Steve, nearly 69 percent of the Texans said overwhelmingly in 1998 'You're the man, we appreciate your tax cuts.'"

Each of the candidates wants to cut taxes, but only one said the plans talked about in these debates were not going to happen.

"There isn't a single one of them that is going to go through," said Sen. Orrin Hatch. "The Democrats will fight it tooth and nail and then the Senate will filibuster."

Tax cuts will be a big part of the Republican platform in this election; what Iowans are looking for is a candidate they feel can win come November. For now, that appears to be George W. Bush.

With 10 days to go before the Iowa caucuses, front-runners Bush and Democratic Vice President Al Gore are holding on to big leads in the polls but are leaving nothing to chance. They're going to great lengths to ensure victory, with carefully orchestrated events.

Gore flew a New Jersey farmer all the way to Iowa Thursday to tell a bunch of Iowa farmers that former New Jersey Sen. Bill Bradley is a newcomer to the agricultural community. A determinedly casual, denim-clad Gore watched as Roy Etsch made the case, looking just a wee bit awkward in a coat and tie.

"The farmers he didn't know existed, I doubt if today he even knows the difference between soy and corn," Etsch said. "But this is a man that comes out here and says, 'I learned a lot from the Iowa farmers about farmers.' Why didn't he do this 10, 18 years ago?"

Bradley has been on the defensive, trying to push the agriculture debate away from his past votes and onto future farm policy.

On the Republican side, despite a 23-point lead from the rest of the pack, Bush brought in the heaviest hitter he could find: his own father.

"So far, so good, but I feel better when I see all these people working," the elder Bush said. "It's wonderful."

Steve Forbes needs to make a bigger impression than he has so far in Iowa. He also needs to mae sure that he's not overshadowed by Sen. John McCain, who isn't even campaigning in the Buckeye state.