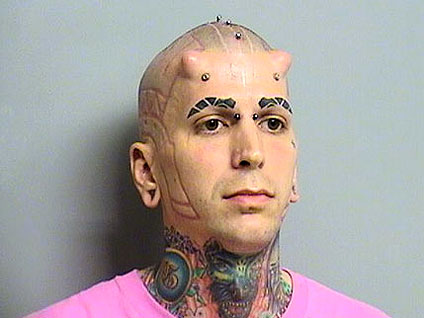 TULSA, Okla. (CBS/KOTV) Look out for this horned guy and his 1996 Ford Windstar minivan. Police say he tried to run down his female landlord Tuesday evening after an altercation.

No, not this angel!

Jesse Thornhill, whose horns would make the 28-year-old stand out in a lineup, has been bonded out of jail after being arrested for assault with a dangerous weapon (How extreme are you when you drive a 14-year-old minivan?), reports CBS affiliate KOTV.

According to the arrest sheet, Thornhill's mother called the police and stated the she and her neighbor, who is also her son's landlord, had been having problems with Thornhill.

When police arrived at the residence, they spoke to the landlord, who claimed that Thornhill tried to strike her with his minivan and she would have been hit if she hadn't jumped out of the way.

Police were given an unmistakable description of the tattooed, branded, pierced, and horned man located him, and took him to jail.