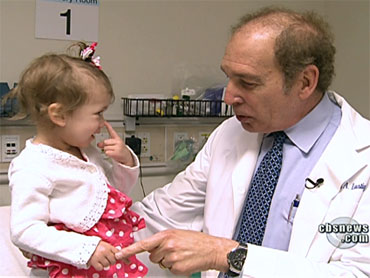 Addison Keegan is barely 2 -- and already a survivor. She had emergency surgery to remove a brain tumor four months ago. Now, her parents are trying a promising treatment in hopes her tumor doesn't grow back.

"Just watching her and playing with her every day knowing we're doing what we can," said Kyle Keegan, Addison's father.

Addison was healthy, developing normally, until violent flu symptoms lead to a devastating diagnosis in February: a brain tumor, called an Ependymoma, was lodged in her brain stem. Neurosurgeons removed as much as they could and luckily, it was benign.

"This is going to be the standard of the future for pediatric brain tumors," said Dr. Robert Lustig, the director of radiation oncology at the University of Pennsylvania Hosptial.

Normal radiation goes through the tumor into healthy tissue and may cause collateral damage to vision, hearing, growth and learning. Proton beam therapy delivers higher doses of radiation which stop just beyond the tumor and theoretically cause less damage to healthy brain tissue.

"We were pretty confident in our decision this was going to minimize the side effects - and that was one of our main concerns," said Kelly Keegan, Addison's mother.

The room where Addison gets her treatment has an area called the gantry. It spins 360 degrees so protons can be delivered from multiple different angles. Those protons come from the cyclotron and come through the snout. The goal is to position those beams to within one millimeter of her tumor.

It could make a big difference in Addison's brain.

"I anticipate for this little girl and many others - the less we radiate of normal brain, the better off we're going to be," said Dr. Peter Phillips with the Children's Hospital of Philadelphia.

Proton therapy has been used on adults for years. This center is the first dedicated to children. It is expensive, averaging about $100,000 - three times more than traditional radiation. It may take a decade to gather conclusive evidence it works.

"It's better for medicine if we study it over the long run - particularly with such an expensive form of technology," said Dr. Edward Halperin, the dean of the School of Medicine at the University of Louisville.

At the end of 30 treatments, Addison is bright and focused, showing no side effects.

"She's running around, just like she was - this is as good as I imagined it would be," said Kelly Keegan.

Right now, Addison's brain scan looks good. There's no residual tumor. She'll have the scans every three months, and gradually every six months and then annually to make sure her tumor hasn't returned.

The treatment is expensive - and insurance companies pay for it on a case-by-case basis. Proton therapies are covered by Medicare and Medicaid. Proton centers usually work with families to work out insurance strategies.